“No Climate Justice Without Gender Justice:” Women at the Forefront of the People’s Climate March – The Feminist Wire

Home / Activism / “No Climate Justice Without Gender Justice:” Women at the Forefront of the People’s Climate March

“No Climate Justice Without Gender Justice:” Women at the Forefront of the People’s Climate March 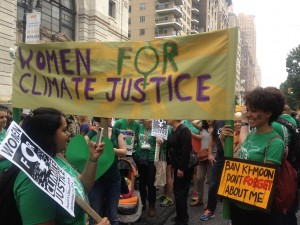 “No climate justice without gender justice!” This was the banner slogan at the forefront of the women’s contingency that gathered for the historic People’s Climate March on September 21st in New York City.

The message comes from the fact that global warming is most dramatically affecting women, primarily Indigenous women and women of the Global South, with disproportionate strain and suffering caused by unpredictable weather patterns, drought, floods, and rising tides; all triggered by the planet’s increasing temperature.

As 80 per cent of the world’s small-scale farmers, it is women who are burdened with the repercussions of crop failures and food scarcity. Still playing a prominent role as caregivers of their communities, it is largely women who are dealing with the impact of increased levels of disease and illness made more extreme by climate change. Moreover, as natural resource scarcity worsens within these communities and at the demand of the global market’s dependence on never ending resource extraction, it is also tragically women who are experiencing increased violence and rape.

Women are at the front lines of the climate struggle. Haydee Rodriguez, President of the Farmer Cooperative the Union of Cooperatives Las Brumas and member of the Huairou Commission, travelled from Nicaragua to make sure her sisters’ voices were being heard. She explained that when agricultural women are faced with rainless seasons, then women cannot grow food to feed their families. Grammy winner Angélique Kidjo from Benin, West Africa, explained that African women are paying the price for climate change, particularly when hunger strikes, as the cooks and farmers of their communities.

Made up of over 40 groups, Women for Climate Justice spanned all political spectrums ranging from organizations such as the Women’s Environmental and Development Organization (WEDO), to grassroots initiatives like the group Radical Women who describe themselves as the “revolutionary wing of the women’s movement…Immersed in the daily fight against racism, sexism, homophobia and labour exploitation.” Hundreds of women composed the contingency. Numerous gender and climate events were also scheduled during Climate Action Week (hosted by The New School), a week of grassroots education, seminars, and panels organized around the big day of protest.

Although the diversity was significant, there was one coherent agreement amongst the group: There are inseparable systemic links between the climate crisis, today’s global economic model, and the ongoing exploitation and disempowerment of women.

For women present at the march, the roots of the climate crisis are not simply an environmental problem. The climate crisis is a structural problem based in gender and racial inequality. Understanding the drivers of the climate crisis means comprehending that Global Southern and Indigenous women’s work, and their societal and political positions, are overwhelmingly at odds with today’s development model centered on endless profit-seeking and growth. 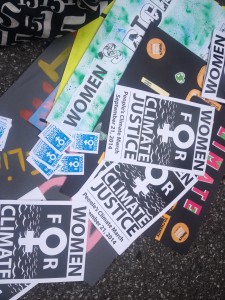 Global warming is a symptom of a brutal transformation of ancient women’s economies based on self-reliant, ecologically sustainable, and durable localized community markets, by intensive industrial development and production imposed by transnational neoliberal and neocolonial economic agendas. Historically, household and domestic food economies were women centered, providing women with secured and often revered positions of economic and social power.

However, since the 1950s, a wave of international policies has enabled multinationals to forcibly replace women-led food production through land grabs, resulting in the severe disenfranchisement of women’s power. Such policies were first led under the General Agreement on Tariffs and Trade (GATT) and then developed into a combination of WTO, IMF, and World Bank tariff and trade agreements. This permitted highly exploitative corporations like Monsanto to start bioengineering, patenting, and monopolizing crops and seeds, blocking traditional farmers (of all genders) from practicing small-scale production and distribution.

Marching with the Cook Organic, not the Planet! folks, renowned author, activist, and ecofeminist Vandana Shiva has brought much visibility to these issues through the campaign Seed Freedom, which reclaims and safeguards open, free, and renewable seeds. Shiva has worked closely with women farmers in India who have been mobilizing for decades in resistance to the “corporate-patriarchal” logic, on which the capitalist system functions.

Bridget Burns, the Advocacy and Communications Director of WEDO, explained that “we need a feminist ideology and women’s perspective to enact models of collective and women’s ownership, of their seeds, of their plants, and of their forests in order to save the climate, and unless we stop trying to challenge those systems by creating new market mechanisms then we won’t be helping women.”

For the NGOs and organizational groups present at the march, an increase in women’s participation is also a major part of the solution. Women’s leadership in climate decision-making processes, including UN negotiations and international government policies, is a way of moving forward towards a women’s solidarity economy and collective environmental responsibility.

This is why organizations like the Women’s Earth & Climate Action Network (WECAN) held their Women Leading Solutions on the Frontlines of Climate Change conference on Monday the 22nd at the Church Centre of the UN.

Yet, although there was an emphasis on the importance of staying connected to policy-based negotiations, this did not take away from a deeper systematic critique of the issues at hand. At the conference, Co-Founder and Executive Director of WECAN Osprey Orielle Lake made clear that “400,000 people marched from many diverse sectors demonstrating the depth of our movement and the understanding that we want systemic change in every aspect of society.”

Casey Camp-Horinek, Ponca Tribe Elder and longtime frontline Indigenous rights activist, was the final speaker at the WECAN event. She started her speech with “I kinda want to go up there.” With the cheering and applause of the crowd, Casey took position at the elevated preacher’s podium, which stood under five hanging religious symbols representing several religions of the world – none of them the “four directions” symbol of Indigenous spirituality. She started, “if we would put this circle on that cross we would have a four directions sign…are we represented up here…? Do you see us anywhere up here? Well now you do!” 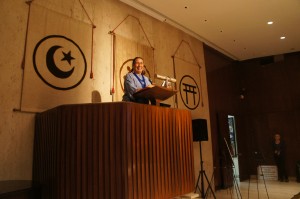 Casey shared stories of her time passing through several residential schools as a child and joked about “being saved” seven times by varying Christian denominations. Her incredible ability to use the church setting as a prop in stressing the ongoing conflicts between Indigenous peoples and today’s political institutions also spoke to a deeper and more intricate historical account of the links between gender, capitalism, and the climate crisis.

In these so called “Indian Residential Schools,” Indigenous children were indoctrinated with messages that preached that God is man, Nature is evil, and civilization means progress and development. Such religious indoctrination was an attempt to squash Native spiritual belief centered on a “Mother Earth” ideology, which emphasized empowerment of womanhood, generating widespread accounts of equal gender relations in pre-contact Turtle Island, now known as North America.

Indigenous women activists and academics have shown how the foundation of contemporary capitalism was contingent on industrial resource extraction of Indigenous people’s land, which was also simultaneously fully reliant on disempowering any positive ethic towards nature and women. This was achieved by installing European forms of gender relations and dismantling women’s power, aided by the appropriation of Indigenous women’s bodies. Residential schools were perhaps the strongest tools in reinscribing balanced gender relations of North American Indigenous matrilocal societies into the unequal ones of patriarchal models imposed by European colonizers and settlers.

For the women’s contingency in NYC, the centrality of resisting the colonization of Mother Earth, Terra Madre, and Pachamama is paramount.

“Violence against the earth begets violence against women.” Those were the words of Melina Laboucan Massimo (Lubicon Cree), long time Indigenous activist and tar sands campaigner for Greenpeace Canada. She continued “I think when we don’t deal with both of them we’re not ever really going to resolve the issue of the colonial mind and the colonial mentality and the values of patriarchy and the values of capitalism that essentially exploit the land and exploit our women.” Extreme resource extraction, such as hydraulic fracturing or fracking and expansion of the Alberta tar sands pipelines, are results of this destructive relationship.

Although Melina marched with the Indigenous contingency that led the People’s Climate March, she was clear about how gender and climate justice go hand in hand. In my personal interview with Melina, she elaborated, “People don’t realize that violence against the land is violence against women, which is an issue we have in Canada specifically with missing Indigenous women, my sister being one of them.” 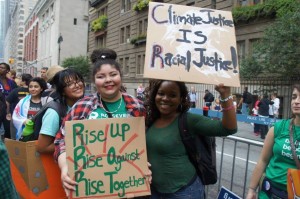 On July 20th, 2013, Bella Laboucan-Mclean was tragically added to the list of 1,200 Missing and Murdered Indigenous Women (#MMIW). Even though her death has been deemed suspicious, there has been no federal inquiry into the crisis of MMIW despite the outcry from First Nations communities and allies. In response, several Indigenous initiatives began a community-led database listing missing and murdered Indigenous women, called #ItStartsWithUs.

Ellen Gabriel, Mohawk human rights activist from Kanehsatà:ke, was sure to make clear that MMIW is not simply a domestic problem at the FRACK OFF: Indigenous Women Leading Media Campaign to Defend our Climate panel. “Indigenous women were targets of the Indian Act because they (European colonizers) knew that the power rested with the women. And right now it’s a man’s world. In fact, it’s a rape culture because in Canada, rape of Indigenous women has gone on with impunity and the government of Canada refuses to have a national action, refuses to have an inquiry because it profits them to continue to oppress Indigenous People…and it’s another form of genocide as far as I’m concerned.”

Noelene Nabulivou from Development Alternatives with Women for a New Era (DAWN) and “LBT Diverse Voices and Actions for Equality” also highlighted how LGBTQI struggles must stay linked to climate struggle. “As a lesbian from the Pacific (Fiji), we also need to remain focused on the intersectionalist work we have around gender and sexual identities for women in rural and remote areas.”

Diana Duarte of MADRE: Demanding Rights, Resources and Results for Women Worldwide, was also vocal about such interlocking issues between the climate crisis and women. She also emphasized that the privilege and power of women in the Global North results in different impacts of climate change on women of the Global South. However, she does not think this divides us and instead advocates for a real coming together in order to confront the roots of climate change. 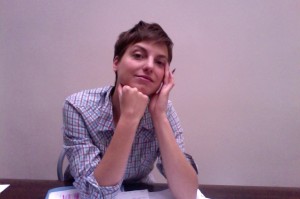 Julie Gorecki is a feminist and climate activist, published academic, and writer. Currently, Julie’s work and activism focuses on the systemic links between economics (specifically neoliberalism and capitalism), women, minorities, and ecology. She manifests these interests through activist mobilizing, journalistic writing, and engaging in art-focused projects that evoke the intersections between gender, minorities, ecology and imagining better societies for people and the planet. She has a Masters in Sociology specializing in the Gender, Politics and Sexuality program from École des Hautes Études en Sciences Sociales (EHESS) in Paris, France. She has also instructed several university courses, including an “Introduction to Feminism and Gender Studies” course at Université Paris Diderot (Paris 7). Follow Julie on twitter @JulieGorecki