Last year, I sat in front of my television in Brookline, a Boston suburb, and watched on live TV as police officers rolled armored vehicles down the streets of neighboring Watertown. Many officers were outfitted in tactical gear fit for urban warfare. They swarmed residential streets, assuming sniper positions atop cars and roofs. Others swept through homes, guns raised. When suspect Dzhokhar Tsarnaev was finally found in a local resident’s dry-docked boat—wounded and curled in the fetal position—police strafed the boat with gunfire. Bullets lodged in the boat and also in neighboring homes. Tsarnaev was later found not to have fired a single shot in that final exchange. In the short term, most of us felt relief. However, the sheer firepower exhibited by local police that day has continued to trouble me. 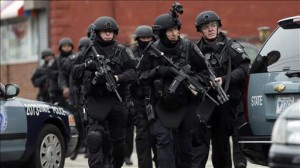 Images coming out of Ferguson in recent days have again revealed the vast capacities of modern police forces to rival advanced military units in tactical gear. And we have seen as well the psychotropic powers of such scenarios. Civilian police forces seem increasingly imbued with a sense that they are engaged in urban warfare against enemy combatants. In Ferguson, the contrast is especially stark: a predominantly white police force, dressed for combat and armed to the teeth, facing off against predominantly black citizens and protestors.

Recent commentaries from Talking Points Memo editor Josh Marshall and Patheos.com contributor Dan Arel have sought to separate the discourses of police militarization from racist policing practices. Both authors worry that conflating the two obscures and/or dismisses the long American history of racist police brutality. Their concerns are apt. In Ferguson, police outfitted in tactical fatigues atop armored vehicles aim guns at an unarmed black citizenry standing in protest. Such a confrontation embodies a volatile combination of racism and excess power that infects local police forces across the country. Yet I suspect there is a more nuanced connection between racism and police militarization in the United States that demands our engagement.

How and why did we come to unquestioningly welcome tactical police gear and armored vehicles on our city streets? The presence of enough artillery to support the defense needs of a small nation would not be possible without an American ideology of state power at home and abroad. Indeed, the hyper-aggression of police in Ferguson and elsewhere would not be possible without state power gained through racist micro-aggressions that pervade American life.

The violence in Ferguson reveals the intersection of several issues typically compartmentalized in public discourse. We often consider the rise of the prison industrial complex, racism and brutality in law enforcement, and the militarization of civilian police departments as distinct issues. However, Ferguson makes clear the need for these phenomena to be examined as expressions of a larger problem. The situation in Ferguson has incited a powerful moment for the American conscience.

Overwhelming force against an unarmed citizenry can wake us up, especially when it is in our own backyard. But the compounding effects of so many stop-and-frisks, unwarranted traffic stops, questionable searches and seizures, rampant incarceration, and everyday oppressions make it possible to incrementally advance a consolidated sense of unified (white) state power without public revolt. The establishment of a docile citizenry is relatively easy to achieve when white folks believe they sit comfortably on the right side of state aggression. 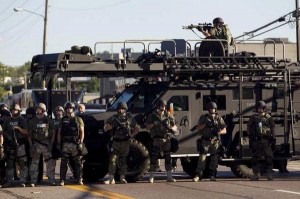 Militarization of police units is also deeply enmeshed with the rise of a prison industrial complex that relies on early and repeat incarceration of society’s disenfranchised. Many Americans are unwilling to challenge a system that quietly funnels a staggering number of black men into its machinations. Policing and sentencing laws destroy the capacity of so many black youths to escape cycles of petty crime and drastic sentences. Unsurprisingly, at the system’s heart is profit: privatized prison contractors who benefit from increasingly high rates of recidivism. The system profits significantly from exploiting entrenched (and yet unproven) beliefs about deterrence and rehabilitation.

An armored police force is not necessary in such a system of pervasive racism and structural inequality. But police militarization can become a ‘logical’ extension of state operations, particularly where ideology needs shoring up.

American foreign policy echoes confidence in the capacity (and authority) of the state to exert disproportionate force for deterrence and social rehabilitation. Such ideology feeds on ideals of social purity, moral righteousness, and firm boundaries between enemies and allies. It is the same ideology that has empowered increasingly-armed police to carry out racist and mortally dangerous policing practices at the expense of basic civil liberties. When this doctrine is turned outward, we drive tanks through the streets of Baghdad. Turned inward, we drive tanks through the streets of Watertown and Ferguson.

The notion of the American military as a global police force is a natural complement to domestic “values,” including profit. The rise of nation-building as a foreign policy doctrine has proved profitable for defense and military contractors. We are remiss not to recognize the role of profit and privatization in American police militarization as well. Weapons and defense contractors benefit from stoking the hyper-vigilance of the modern police force, outfitting American police units while enjoying the excesses of Defense Department contracts.

Meanwhile, many of us continue to live in the in-between, especially if we are white. Many Americans are generally privileged to enjoy neither the regular and racialized threat of police intimidation and incarceration, nor the receiving end of troubling foreign policy (or a rocket). In the wake of Ferguson, we must redouble our efforts to raise questions about the links between racism, power, and the state. Speaking of armored vehicles and racist policing is not an either/or proposition, but rather a deeply enmeshed problem for the modern state. 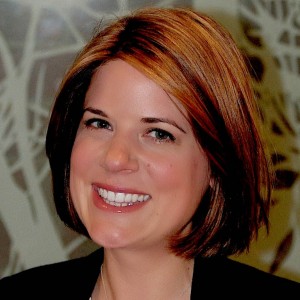 Carolyn Davis received her Ph.D. in Religion from Vanderbilt University, where she specialized in Theological Studies, Philosophy, and Women, Gender, and Religion. Her research examines the relationships between human sexuality, young people, popular and political rhetoric, and feminist theology and philosophy. She currently resides in Washington, DC, where she is engaged in several projects relating faith communities to reproductive justice and faith-based youth sexuality education. She is also an ordained minister in The United Methodist Church.