Personal is Political: On Impact We Lie Die – The Feminist Wire

Home / Family / Personal is Political: On Impact We Lie Die

Personal is Political: On Impact We Lie Die

12th grade. My boyfriend, Marty, lived with his aunt and her 37-year old son Jane. His mother had died in a car accident, along with his two sisters, years ago, and his father had given himself over to alcohol in grief. He had been saved because, as the youngest person in the car, he got last dibs as to where to sit. So, he got smushed in the middle, on the half-seat, the child’s seat. The car was hit hard on the right, spun into the opposing lane, and was slammed by a semi on the left. They all died on impact, except him and his father. The first car that hit them was driven by an alcoholic who survived the accident. His father had not been drunk that time, but was having a fight with his wife about Marty. This is how my boyfriend remembers the story.

Often, when I’m at his aunt’s house, I sit at her bar, look at myself in the long, wide gold-speckled mirror, and watch Marty behind me, pacing, recounting this story, and how his father left him with his aunt, how his father could no longer look at him without getting angry, without blaming him for the loss of his wife and their daughters.

Marty, like my brother, became a juvenile delinquent. Years after we broke up, when they were both adults in the same city jail, they would call me, passing the phone between them. They would do this often, and I would keep the phone away from my ear, listening to these two men who had, at one point or other in my life, traded my trust of them for their own power.

The year before my brother ended up in jail with Marty, he’d moved back into my parents’ house. There he was downstairs, and there I was upstairs. My parents were out-of-town, and I’d invited my current boyfriend, S., to stay with me. I didn’t feel safe alone in this house with my brother, who had raped me when we were both children, and whenever he was home from juvenile detention, he would find some way to lie down next to me. For two days, S. and I stayed in my room. One day he needed to breathe another air and went downstairs to chill with my brother. He came upstairs, soon afterwards, fuming, “Get your shit! Get your shit now! We’re not staying here! I’ll kill that motherfucker!” My brother had asked S. for intimate details about how we have sex. “Does she suck your dick? Does she suck it right? Does she start slow at the head or does she go all the way in? Does she get on top? I bet she looks good on top like that. Does she move? I know she makes a lot of noise. I heard her.” When we were far from the house, sitting in a gas station in the middle of the day, he began crying and beating the steering wheel, feeling powerless and helpless and violated. I imagine he wanted to hold me and say, “It’s okay, love. It’s okay, love. It’s okay.” But by then, he knew I’d been lied to enough and that it wasn’t okay, and it would never be okay. So, instead, he said, “I will kill that motherfucker.”

I’ll be honest with you. I was in 9th grade, 14, at the start of this story, 5 years past my first period, past my first training bra, and a virgin. But only in the lying way of being a virgin, when a woman wants to own her own body, and says she’s a virgin even though her brother first penetrated her 7 years previously. The kind of woman who was never a virgin, who experienced the first piercing before her first period.

When Marty went to juvie the third time after we’d begun dating, he wrapped a shortened bicycle chain around my ring finger and said I was his wife. In the dozen holes in that ring, I saw a dozen escape routes and a body too large to fit through. He fastened the chain with a paper clip, one sharp edge that kept prodding my palm. I pretended not to notice as I listened to him say, “My uncle will take care of you.” Perhaps he needed me to be an orphan, like him, in need of a distant relative to serve as protector. I couldn’t see my boyfriend’s face clearly in the dark, couldn’t tell him with my eyes that I already had a father, and more importantly, that I’d already laid next to his uncle and felt his cock pushing against his jeans, against my skirt, and that his uncle’s palm had already touched a part of my skin that Marty had never seen. We only have a few minutes, he said, locking his fingers between mine, pressing the paper clip deeper into my palm, and pulling me up from the overturned buckets we’d been sitting on. I’d never realized how strong he was, until he was tugging at me to keep up with his fast pace, pushing me against the side of his aunt’s house and kissing me with pressure.

I think I loved him then, especially his brute strength, but this is the story of many girls who have been raped. Sometimes we become confused about strength and passion and control and force and brutality and protection. Sometimes we crave the painful parts, and I did that evening as he bit and sucked three large bruises on my neck. Days and days afterward, no one’s eyes would miss those bruises. “You’re mine,” he said. “You belong to me.” “Yes, yes, yes,” I said, as I buried my nails into his skull, raised my leg and pressed my thigh into his hip bone, and looked into the eyes of his uncle, Jane, who had come up from the backyard, watching us and running his hand across his crotch. I swelled, “I am yours yours, yours. I belong to no one but you.” Then, my father called for me, Jane hurried away, and Marty, whose face was wet and swollen, sang, “I love you, I love you, I love you.”

His uncle is an alcoholic, and has a prominent bald spot in the top of his head with little knots of hair floating on the surface. His hairline is receding, just cruelly enough to make the bald spot noticeable. Or I may be confusing him with a man who would be my boss 10 years later, a man who also had crooked teeth, a drinker’s pouch for a stomach, and a deep tenderness for young girls. What I mostly recall about the uncle is his name, Jane, a woman’s name. I often wondered, when he held me on his bed, pressing his hand in my stomach, if he hated women because his mother gave him not one but two women’s name, Jane Catherine, no way to escape the taunts of children, no nickname, no name to hide behind.

But I was safe, I thought. Boyfriend in juvie. Brother in juvie. Jane lived miles away. Until my parents were called to Jane’s house to bring gallons and gallons and gallons of water, because his mother had missed another couple of months of paying the water bill. It was late at night, so my parents brought me and my sister along. Our family lived in an apartment adjacent to Jane. I went with my mother to Jane’s house and my sister went with my father to our relatives’ house. After we hauled all of the water in, my mother and his mother went over to my relatives, forgetting that I was still in the house. Jane had pulled me into his room again, and I was there with him held and holed up when I was supposed to be next door at my relatives’, where his mother and my mother were, talking in my relatives’ well-lit apartment. His mother hadn’t paid the light bill either, so Jane and I were in the semi-lit apartment, our shadows heavy on the walls. I was supposed to be somewhere with my cousins, gossiping about boys or in the kitchen with my grandmother trying to figure out how to make a pie but I was there with him, my hand squeezing his cock, his hand pressing my clitoris and goddam it, I liked it I was me and not me hovering and grounded shirking and seducing and yes, I knew right from wrong and yes I gasped because I liked the feel of his cock throbbing in my hand and yes I wanted someone to hear us. I wanted him caught. I wanted him in jail. I wanted every man who’d hurt every girl caught. And I liked it. I had been handed over to him. What was I supposed to do? I squeezed and pulled and squeezed and pulled until his mother’s voice rescued me, until his hand went from my pussy right to my mouth, a fist thrust into my mouth, and, “Shhhh! Shhhh! Shhhh!” We scrambled to put ourselves right, to grab the holy book, him leaning against his dresser and me sitting on his bed my legs tightly crossed. And the hate volleyed from his eyes to mine and back again. I can’t remember how this all happened. I can’t remember. I can’t remember. I can’t.

“Bible study,” we said and meant the Koran. His mother, like my parents, is Muslim. I said I was helping him with his lessons. I look right in his mother’s face and lie. And it’s okay, it’s okay. This is every girl’s story, I tell myself, this is every story of every girl whose been raped. We learn to lie and lie, and it’s okay. 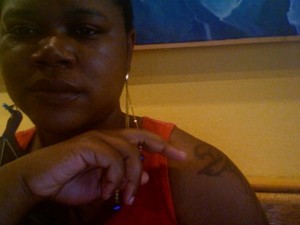 Metta Sáma is author of Nocturne Trio (YesYes Books), South of Here (New Issues Press), and the forthcoming chapbook After “Sleeping to Dream” (Nous-zot). Her prose and poetry has been published in bluestem, Drunken Boat, fringe, Pyrta, Rattle Reverie, and Sententia, among others. Her critical work on Terrance Hayes, Toni Morrison, Dionne Brand, and Audre Lorde can be found in Muse and Mentor: Essays from Poets to Poets; Reclaiming Home, Remembering Motherhood, Rewriting History: African American and Afro-Caribbean Women’s Literature in the 20th Century; Femininities and Masculinities in Action; and The Caribbean Woman Writer as Scholar. Sáma is Assistant Professor & Director of Creative Writing at Salem College and Director of Center for Women Writers.