COLLEGE FEMINISMS: On Ferguson’s Protest and Its Occupation – The Feminist Wire

Home / Academia / COLLEGE FEMINISMS: On Ferguson’s Protest and Its Occupation

COLLEGE FEMINISMS: On Ferguson’s Protest and Its Occupation 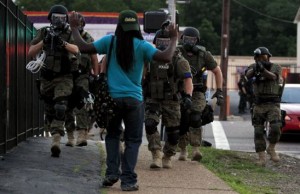 On Saturday, August 9, 2014 at around noon, eighteen-year-old Michael Brown was gunned down by a Ferguson, Missouri police officer. Eyewitnesses report that Brown was unarmed when the officer opened fire on him. The autopsy reports that Brown was killed by multiple gunshot wounds, but the report initially did not reveal how many shots Brown sustained (we now know it is at least six). Two days later on Monday, August 11, 2014 several officers from the Los Angeles Police Department (LAPD) shot and killed twenty-five year-old Ezell Ford. Ford was detained and placed on the ground when eyewitnesses say he was shot in the back. Brown and Ford are the most recent fatalities in the long list of young Black men and women who have been gunned down at the hands of those who deem themselves protectors of neighborhoods and communities—Darren Wilson, George Zimmerman, Theodore Wafer, Johannes Merserle, and the unnamed Los Angeles police officers to only name a few.

The fatal shooting of Michael Brown has sparked media and public outcry, and the town of Ferguson has erupted in multiday protests against police brutality and misconduct. Citizens of Ferguson and the surrounding areas, along with journalists from multiple sources, have taken to the streets to express their distrust and outrage at the constant and consistent denial of the value of Black lives by police departments, courts, government officials, and the media across the country. The protestors demand justice for Michael Brown through various campaigns, both violent and nonviolent. Many outside the area have taken to social media using #IfTheyGunnedMeDown, #Ferguson, and #MichaelBrown to show support and solidarity for the family and people of Ferguson who mourn the loss of one of its sons, as well as for the many other Black men and women who have, and will continue, to suffer the same fate.

It is significant for all of us that the town of Ferguson is protesting the use of excessive and fatal force by its police officers, and social media outlets are in an uproar about the killings of Brown and Ford.  This is of national and international importance because Ferguson is the first large scale protest in the name of justice for Black people in the United States, and against “civil protectors’’ since the LA riots of 1992 sparked by Rodney King’s beating by the LAPD. As a result, Ferguson has been turned into an occupied territory, surrounded by armed police forces and highway patrolmen who all wield ex-military gear, weapons, and tanks. Within this context of intense militarization, the protestors are being called violent, aggressive, and criminals.  They are presented as being in need of police monitoring, correction, and assault. 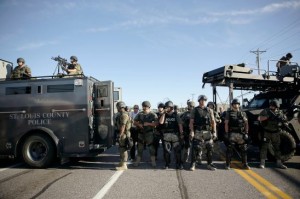 I sit here angry, scared, and uncomfortable—not at the protestors, but at the turning of Ferguson into a war zone equipped with its own occupying forces. I have never been to Ferguson and only driven through Missouri. However, in this space there exist the geographical violences and memories of slavery that I seek to uncover and examine in my work as an academic. My passion for this subject grows from the fact that I am a Black woman with Black male relatives who have all been harassed, beaten, degraded, and arrested by the men and women we call our civil servants and protectors. My sister raises my three nephews knowing that one day she may have to bury them because they did not put their hands up fast enough. She has to tell my nephews that their silence and compliance will not always protect them. She has to remind them to remain quiet, still, and obedient, to never reach for anything, keep your hands up and on the dashboard, and maybe then you may walk away with only a beating as a warning.

Violence is in my blood. Violence is in my blood because it was beaten into my grandmother’s hands and stabbed into my uncle’s back. And yet, what I am hearing is that the people of Ferguson need to remain peaceful in their protest. They are told that they must maintain order in the distrust and contempt for those who are supposed to protect them. I ask: where was this order, peace, silence, diplomacy, and hands up policy when Michael Brown, Trayvon Martin, Renisha McBride, Emmett Till, Ezell Ford, Eric Garner, Addie Mae Collins, Cynthia Wesley, Carole Robertson, Denise McNair, Marlene Pinnock, Stephon Watts, or Jordan Davis to name only a few, were made victims of “correctional violence?”

As Black feminist June Jordan, in her 1974 “Poem about Police Violence,” asks,

what you think would happen if

every time they kill a black boy 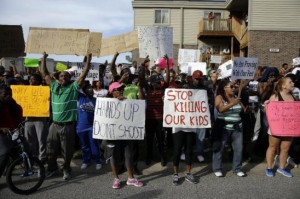 As academic feminists, we often see corrective violence as something that we must bear witness to, but it remains outside of the hollow walls of our offices. We are aware, however, that our walls will not protect us from the racialized, sexualized violences universities enact on our students and ourselves. We are disciplined—coopted, silenced, denied tenure, harassed, arrested—into submission or erasure. Those of us who survive this may make it outside of these walls in order to study the men and women around the world who struggle against the restrictive power upon their lives and beings. The protests in Ferguson are demonstrations of anger at injustice, and therefore are a feminist concern.  The protests in Ferguson are part of a feminist project whether or not they take the form of violent or non-violent displays. In Ferguson, attention is being paid to Blackness and race.  People are demanding that race be talked about and that Black lives be valued. There has never been a moment in African American history where Black mothers and fathers did not have to worry about keeping their children—keeping them to raise them, keeping them safe, keeping them alive. The protests in Ferguson are central to feminism; they are a feminist fight. 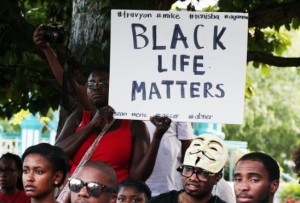 When June Jordan asks, what do you think will happen if every time they kill a black boy then we kill a cop, she is asking us to imagine what happens if corrective violence and its users had repercussions—repercussions that come from the communities who are subjected to this violence. How different would our history look, and how much would our justice system change if the statistics for dead white cops matched the number of unarmed dead Black boys? At every trial we hope justice will be served, but it never is because every day another unsuspecting Black man will be gunned down with his hands up. The history of racial violence in this country necessitates attention. It requires that we connect each gunned down Black man with each—raped woman of color, beaten and harassed Trans person, Muslim person called a terrorist and stripped of their civil rights, and every U.S. deportee. Race is a thing and an issue because it has been made that way by systems of corrective violence. It is for this reason that we cannot continue to close our eyes and pray that the world gets better. We have to demand that it change, as we do not have the privilege of having justice on our side. Justice does not favor communities of color’s rights and bodies; instead, justice (as it stands now) seeks only our systematic eradication. 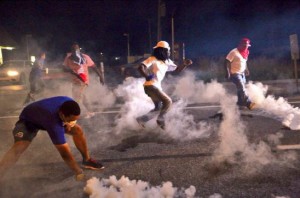 Protests cannot be peaceful and effectively disrupt the political, judicial, and police processes that continue to devalue Black lives. We must recognize violence as an alternative to peaceful protest. Rage against corrective violence is a valid space of resistance to the use of state sanctioned deadly violence. We must refuse the deceiving narratives that incite fear of deviant bodies who speak out against the killing of Black communities.  Communities of color do not have the luxury of seeing change, demanding liberty, or claiming their humanity through peaceful protests. 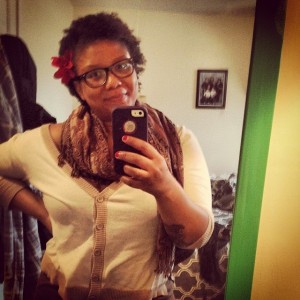 Vanessa Lynn Lovelace is a doctoral candidate in Political Science and Women’s, Gender and Sexuality Studies at the University of Connecticut. Her research interests include the gendering of Black bodies; the usage of violence as a means of revolution and rebellion; postcolonial feminist theory; the theoretical concept of liberty; and the history of African American radical movements and traditions. She is a poet and teacher, and currently on the academic job market.