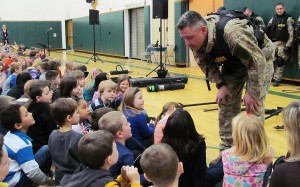 On a rather dreary day in April 2013, I found myself holed up inside of a cardboard box on a closet shelf some ten feet in the air. Gripping my blue training gun, I shifted my weight and listened to my heart beat faster in anticipation. Suddenly, a group of high school students busted through the police training house’s front door in search of me, a suspect in a home intruder simulation. I heard students shout, “Clear!” as they moved through each room. As waves of excess adrenaline, shock, fear, and enthusiasm washed over me, I lifted the edge of the cardboard box, peeking to see the shadows of students. When the third group of students-cum-police recruits moved into the closet, I managed to push out of the box, point my gun at the students, and yell, “Pow! Pow! Pow!” Students leapt in surprise, struggling to shoot back with their own guns, but to no avail.

These energetic students, mostly poor and working class youth of color living in the greater DC-area, had come to the Police Academy on a field trip as a part of their participation in their school’s specialized homeland security program. Through partnerships with defense contractors like Northrop Grumman and federal agencies like the NSA, this program trained these young citizen-subjects as the next generation of “military grunts,” TSA “wand guys,” prison guards, Border Patrol agents, police officers, NSA workers, and cyber security technicians.

To do so, students enrolled in newly created homeland security classes developed with the help of security industry partners. Students also attended field trips to places like the Naval Academy, a US Customs and Border Patrol port of entry, and a local college’s Cyber Battle Lab. They listened to guest lectures by high-level agents from the NSA, FBI, Northrop Grumman, US Nuclear Regulatory Commission, and US Army Corps of Engineers. These partnerships also created opportunities for students to earn coveted internships at the NSA and Defense Information Systems Agency (DISA).

Through these activities, students learned that the US faced an unknown number of threats each day from the dangerous, brown, foreign Other. In order to stay safe, the US deployed necessary and fully justified militarized techniques of national defense, including war. Reinforcing the notion that “total security” was impossible, the program called upon students to contribute to these violent yet valorized operations of national security. As faithful US citizens filled with patriotic pride continually reminded of September 11 “grief and hysteria,” students readily responded to this call. As one 11th grader passionately exclaimed, “I want to go to college and enlist. [The] homeland security [program] showed me so many things. It’s not just cyber. Homeland security is everything! …I’m ready to fight for my country!” Another student articulated:

For these students, to “[be] important,” to “make[] a difference,” and to “affect[] somebody” meant working for the military, government, or security industry, foreclosing other forms of “important” work like teaching, nursing, and social justice advocacy.

Observing students participate in this program made clear that this public high school had restructured itself into a critical staging ground for the global war on terror. As students expressed palpable fears of terrorists who “could be anyone” from anywhere at any time thus requiring their constant vigilance to guard against terrorist attacks, the school actively produced and propagated the ideologies, knowledges, skills, and sentiments that make going to war possible.

As startling as I found this school’s emphasis on issues of national security and military solutions to social problems, it was hard not to be engaged in the program. In fact, I carefully noted at the Police Academy how seriously the students took each simulation, both actively participating in the activities and carefully listening to the instructions of the police trainer. As my own participation in the home intrusion simulation shows, I also enjoyed myself that day and sought to demonstrate to students what I knew about policing. I appreciated the break from a typical day stuck in a bleak school building listening to teachers drone on and on about parabolas or literary devices. It was easy for me to see why students wanted to be in the program: They engaged in stimulating hands-on lessons, met high-level security industry experts, and participated in internships. Students recognized that these opportunities would help them obtain specialized security-oriented jobs that they would both enjoy and take pride in. The connections to future jobs and the thrilling nature of homeland security activities made the program both gratifying and important to students. Moreover, teachers viewed these opportunities, and the possibility for students to qualify for jobs in the booming security industry, as a way to ensure students graduated from high school and secured their financial futures while also serving the nation.

Yet, we should not be pulled by the allure of these trendy homeland security programs. We should not be duped by what, superficially, appear to be benefits of such military training like disciplining students, engaging them in classes, and preparing them for work after graduation. I was certainly swept away by these organizing logics at the Police Academy, which cloaked the deliberate training of poor and working class youth of color for war and the funneling of their bodies into the war-making business. This homeland security program, after all, worked to reproduce a lower-tier, low-wage labor force and to advance the global war on terror.

My experience at this school brought into sharp relief how the deep infiltration of military and security agendas reworks and reorganizes US public schools for the production of war and for the securing of society. As militarization and securitization creep into the daily routines of students and school staff across the US, these homeland security programs indicate that a profound and systematic restructuring of US public schools is underway across the nation. As schools increasingly adopt homeland security programs, amplify JROTC funding, implement biometric technologies typically used in warzones, infuse military values and culture in everyday school life, deploy military leaders as school teachers (see the Troops to Teachers program), and install militarized disciplinary regimes, the relationship between war, national security, and public schooling demands more critical and ethnographic attention.

In turn, we should be unsettled with the knowledge that we have tasked our public schools with a mission aimed at preparing our most marginalized youth to risk their lives in the name of national security. We should be livid that we have continually insisted upon the disposability of poor and working class youth of color. We should be angry that we teach young people that ultimate forms of masculinity value brawns over brains and privilege aggression, brute force, and violence over compassion, communication, and empathy. We should be outraged that schools, in desperate need of resources, realign their curriculum and culture to meet the needs of the security industry, which donates dollars and expertise to schools. We should be furious that we’ve reduced schools to merely churning out disciplined young people who will maintain and extend the US national security state rather than critique and transform these violent relations of power. We must reclaim US public schools and re-imagine the smart, vibrant young people who attend them. Doing so requires that we invest in the long-term remaking public schools as sites that nourish critical inquiry, democratic participation, and social transformation rather than war. 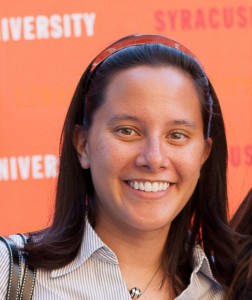 Nicole Nguyen is a Postdoctoral Research Associate in Educational Policy Studies at the University of Illinois-Chicago. Her research interests include national security and US public schooling, participatory action research, ethnography, and feminist geography