Rethinking Resilience in Violence Against Women Debates – The Feminist Wire The article “Safe Passage,” written by Diane Hill of the Canadian Women’s Foundation, advocates young women develop “resilience” to overcome the challenges of living in our contemporary racist, patriarchal societies. The World Health Organization estimates that in Canada 1 in 4 women experience domestic or sexual violence during their life; an intimate partner kills a woman every six days. More appallingly, Indigenous women in Canada are at least three times more likely to experience spousal assault than non-Indigenous women. Yet, Hill claims that abused women and girls can recover through resilience: “the ability to get back up after you’re knocked down, and, in time, to regain your footing in life.” Resilient women, according to the article, have “self-worth” and “see solutions to problems”; they “bounce back” from trauma.

The resilience agenda is spreading through public discourse like wildfire. Canada’s Public Health Agency promotes resilience in “family violence” prevention (a degendered term for woman abuse by intimate partners), and the United Nations “support[s] women’s and girls’ resilience against violence.” Despite the confident tone, resilience is not the solution it appears to be for the social emergency of violence against women (VAW). To create the social transformations to end VAW and the systemic inequalities feeding and sustaining it, we must re-think resilience.

Scholar Mark Neocleous argues that resilience is part of neoliberal governance. The concept originated in ecological theory in the 1970s as “system resilience”: the “ability of a system to avoid being pushed over the edge into an alternative equilibrium regime…and return to normal function after a disruption.” Resilience theory fits well within a newly neoliberalizing world that is defined by a globalized economy that is complex and interconnected, making it vulnerable. A crisis in one area could fatally disrupt the entire system. But a culture of resilience fosters a belief that any disruption can be overcome since the system is resilient. Thus, through resilience, the global neoliberal system has the capacity to “bounce back after a crisis or trauma.”

Neoliberal resilience increasingly dominates societal understandings of what it means to be secure. Such an idea spread most prolifically within public discourse in the years after the September 11th terrorist attacks in the United States. 9/11 represented a serious trauma to neoliberal hegemony through the “alternative equilibriums” of radical Islamic terrorism. Commentators noted – and bin Laden himself claimed – the attacks were a revolt by a marginalized, disenfranchised, and angry global population against Western political, social, and economic domination. It was at this time that the ability of Western societies and neoliberal globalization to bounce back from crisis became a national security issue. Both the US military and Department of Homeland Security fixated on resilience after 9/11; their allies to the North took a similar approach.

Canada released its first Building Resilience Against Terrorism policy in 2011. The resilience agenda converts resistance stemming from immense systemic inequalities into “disruptions” to “regime equilibrium.” In this process systemic change, based on recognizing causal links between the system’s flaws and the wellsprings of crisis, has no role. The system must maintain its equilibrium; insecurity becomes inevitable. The resilience agenda is “a presupposition of permanent threat.”

That the resilience agenda moves effortlessly between neoliberal global security and women’s personal security should raise concern. Angela Davis argues that sexual violence cannot be understood or prevented without understanding its relationship to “racial, class, and governmental violence and power.” Using resilience in anti-VAW debates brings with it a fixation with ensuring “equilibrium” and “normal function” and thus an aversion to systemic change. In 1971, Susan Griffin wrote that from an early age she “thought of rape as part of my natural environment… that the world was not a safe place for women.” Resilience justifies the enduring problem of women’s violent victimization without attempting its resolution: it renews VAW as the “natural environment” of advanced capitalism.

Within this renewed, violent status quo, the CWF article reminds women to focus on their own resilience, “turning inward to solve external problems.” As social policy, neoliberal resilience manifests a twisted genius, making people individually responsible for systemic insecurities. Wealth distribution is grossly unequal across the global neoliberal system but as public funding shrinks and services cut, those most effected must remain resilient. Neocleous writes:

Resilience as social policy emphasizes the importance of individualized, internalized skills such as courage, perseverance, and will power. By this logic, to escape poverty people need only summon their courage to endure. These skills are available to everyone, though many organizations like the CWF support specific training to develop the necessary values and cultural attributes to be properly resilient.

Resilient women are responsible for recovering through their own personal attributes. Hill’s article describes programs with abused girls that encourage them to activate their “natural resilience,” and “build” the resilience skills of “confidence, critical thinking and connection.” In this way, the resilience agenda very successfully de-politicizes VAW and obscures its many intersections, including its disproportionate occurrence for women of colour.

Resilience may have an intuitive appeal (particularly to those who don’t need it): no matter how desperate your situation, you have an exit – the old mantra, “the only thing you can control in life is your behaviour.” Resilience promises achievable goals and therefore, it offers hope. But commentators insist on the direct correlation between the need for resilience skills and the uncertainty of advanced capitalism. For Neocleous, resilience skills are “training to withstand whatever crisis capital undergoes and whatever political measures the state carries out to save it.”

Resilience includes an implicit assumption that it already resides in humans; one is free to choose to be resilient or not. Underwritten by liberal subjectivity in this way, the potentially resilient have an equal capacity to overcome crises. They are not differentiated by race, gender, sexuality, or class, so cannot claim a structurally embedded barrier to bouncing back. Like humanism, an older manifestation of white patriarchal privilege, the resilience agenda effaces the structural causes of personal insecurities. It is a one-size-fits-all, everyone-starts-equal attribute. As activists plead with the public not to re-victimize survivors of violence by making them complicit in their abuse, the resilience agenda actually returns women to the VAW causal loop. Yet resilience focuses on bouncing back after abuse rather than looking at causality or the root cause before.

Re-thinking resilience: other hopes for the future

Resilience has been used somewhat successfully with women experiencing domestic violence. In treatment programs designed similarly to those for addicts, abused women are encouraged to view themselves as being “addicted” to the violent relationship and/or partner, to understand triggers of violent episodes, and to reflect on why they stay in the relationship. With this self-knowledge, such programs aim for women to develop resilience to leave the relationship and move forward.

Here, I think we must distinguish between the agency of individual women who move beyond their victimization despite the challenges of living in racist, patriarchal, and violent societies, and the collective agency needed to challenge these oppressive structures. Collective resistance is ultimately the only way to change the violent status quo.

Resilience, like all forms of neoliberal governance, works against the “alternative equilibrium” of such collective agency. Pressured to rise above their victimization and activate their natural resilience, women are encouraged to look within rather than to the “networks, solidarities and conversations among movements on a global scale” that Andrea Smith and others argue are essential to social transformation and justice. Looking within may also obstruct incorporating recent developments and trends, such as engaging men in violence prevention and bringing them alongside women’s leadership in anti-VAW activism.

In Canada, the most conservative estimate of Indigenous women who have gone missing or been murdered is 582. The federal government responded to calls for action by releasing in March a disappointing report that was rejected by Indigenous and women’s organizations. In the report, the federal government continues to resist a national inquiry to investigate these crimes and, more fundamentally, why Canadian society has such low regard for Indigenous women’s lives. 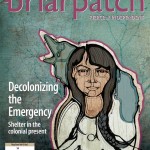 We cannot ask these 582 women to be resilient, to get back on their feet. Yet their families, friends, and communities are embracing more hopeful and empowering resilience skills. They see the solution to the problem of violence against Indigenous women in achieving justice for the victims, beginning with a national inquiry and aspiring to confront and change the violent colonial status quo. This time, the Canadian government is not supporting resilience. But we can honour their resilience. We can support the successful work already being done by communities to help abused women in ways they decide are right for them.[i] We can slow down adoption of resilience in VAW debates, and with critical awareness and collaboration, re-work resilience as a hopeful force for transformative justice.

Thanks to Julie Coleman, Executive Director of the Pincher Creek Women’s Emergency Shelter Association, for her helpful feedback on the piece.

Emily Lindsay Jackson is a social scientist researcher and teacher based in Edmonton, Canada, although she started her journey in Belfast, Northern Ireland. Her writing explores intersections between gender, (in)security and society.