Girl in my history class

totally started looking like a zombie from The Walking Dead.

in ripped up faded jeans blue.

down the spine, screaming out,

“Keep calm and zombie on.”

Zombie girl has no time to be eating brains.

Pulling out her pink Hollywood vitamin-water. Only the finest

Holding her brand name iPhone, instead of that text.

Tumbling images of maggots on a 200 follower Tumblr page.

Stuck in her self-indulgent American culture,

bombing her zombie mind with “Yolo and Hella.”

beating the crawling cockroaches to this last minute supper.

too mindless to thrive on a living mind.

Kicking the habit of learning.

Gonna be a walker.

dropping off knowledge to their feet,

dropping off their brains and trading up, eating up stereotypes,

We are turning into…doomsday already came.

Happened the day knowledge was dropped off the face of

the earth for Hallmark love cards and a Big Mac.

Happened the day zombie girl choked up her silver spoon.

I want cheese with that Big Mac.

Happened the day we forgot politics is not a language,

forgot death is not the way to make a statement.

Happened the day American education was left behind.

Happened the day young people raised their voice to bible

for the Kardashians instead of a Third World nation.

We got red zombie blood.

He carries a gun, not a briefcase,

on his mom’s mini van.

“He was just a good-kid-gone-bad.”

of the Untied States of America

and to the Republic

for which it stands

Look at the painting we’ve airbrushed –

no massacre bullets, no colors,

“This doesn’t happen in mid-white America.”

Let’s do some freedom math and

can you imagine being in white man’s shoes?

His power slipping away.

The one owning a gun but no voice.

They were converse blue,

like his copy Of Mice and Men and the book titled,

Train Your Brain to Get Happy.

We fear, we profile. They become victims.

She was a well-liked woman.

one vanilla white in the shape of her son’s race.

** The author would like to attribute the title of this poem and its discussion to:

David Leonard (2012) “Obama and the Death of White Power”

Born on the belt of justification of a woman’s Bible

guide to cooking turkey, without her turkey baster,

between her oven “Mitts,” an almost-president

trying to take her rights away. Her womanhood,

her green tights, bow, and arrows.

She’s the Katniss of housewives.

She’s a firestarter or better yet a red head from head to.

Yaz, that’s a lot of dough for one month of waiting to praise

of praising God that he made Jesus turn wine into her period.

As she sat on the porcelain God reading passages from Matthew 1:18AM:

The night the stars of Bethlehem hung heavy in the sky,

They came from the east,

“She was a good fuck,” Cameal, Samael, and Gabriel said.

This is the date she will remember forever.

Her holy of holies to be judged at arm’s length.

by a man holding her bible, her words,

the savior absent during the courtroom’s final veil

that rape is the new four letter word for…

Fuck, Mary had to visit the GYN.

Where she found a pamphlet with big block letters

“Keep calm and there’s a clinic near by.”

Chalk is all she could find at the age of fourteen.

Thought chalk could defend her from snakes tongue

biting the apple of belief, claiming

her fetus’ finger tips feel pain more then Mary ever did.

her clothes were too tight and promiscuous.

“Then God said, ‘Let us make mankind in our image,

so that he may rule over the fish in the sea, the birds in the sky, over.’”

they slammed her head into bricks.

“So God created mankind in his own image.”

they made her give them up, the mouth, the tongue, her breast.

“And God saw that it was good.”

they used the metal rod.

My God she must not have felt pain.

I guess the media forgets “her.”

Sometimes she almost forgets him on top of her-

almost forgets his breath pushed up into her-

forgets almost the moment she became a statistic.

What about the ones forgotten when we closed our eyes.

Because numbers like those, you can’t do the math,

because remember the stereotype,

Women are bad at math.

Can’t multiply David’s stars burned in her back,

subtract a cross-nailed to her legs and divide the hijabs choking her.

Open eyes to the addition of shoulder blades tugging to cliffs,

blessing new wings on the way down, the second coming of women. 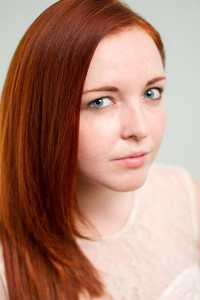 Jaclyn Weber is a California native and transfer student attending her final semester at Bradley University. She has a forthcoming piece in Collision Magazine and has published in Zaum Literary Magazine. Jaclyn’s work has been performed at Peoria’s lively Whisper and Shout reading series, the Cornell College University of Illinois Springfield, and Upper Iowa University Fine Arts Series. Jaclyn was awarded the 2013 and 2014 Academy of American Poets Prize and the 2013 Civil Rights Poetry Competition at Bradley University.