Around  this time last year, I started to read books about grief. I like to think that I did this because I wanted to be prepared for death, but really, it was an accident. I was in Powell’s Books a month before I left Portland and I happened to see Joan Didion’s name on the shelves that flanked the doorway to the blue room, the literature section. In a place like Powell’s, one that takes up an entire block in downtown Portland, one would do well to search the tall shelves for familiar names, otherwise, it’s just all too much. The book was A Year of Magical Thinking and Didion repeats the beginning lines in fragments through out the book.

“Life changed fast. Life changes in an instant. You sit down to dinner and life as you know it ends. The question of self-pity.”

I didn’t read the book until I arrived on the bare floor of the empty Tucson studio that I spent my last money on. Since I was still unemployed, I made sure to use my excess time to pen-mark and heart-feel all the lines that spoke to me but the fact of the matter was, while I could understand the relationship and appreciate the beautiful partnership she sustained for most of her adult life, I could not understand the death that ended it.

I have lost but not the kind of losing that creates the vacuum of want, the pit of absence that is bottomless, irreparable. Because of this, I fear feeling. Some days my body is covered in static and I am invisible. I don’t know if that which weighs me down or lifts me up is enough. I don’t know what is meaningful.

When my now and once again Significant Other left me for a very pregnant woman, two roads of insecurity intersected. One, I would never be like that other girl. I would never be all girl because I was part boy and two, I had acknowledged out loud and in writing that I wanted to grow old with this significant person. The profound nature of this heartbreak came from the expectations I allowed to form, and the actual reality that took place. I knew that no one had died, no one even got close, but my chest hurt for 9 months straight and I couldn’t eat. I remember stepping out into fresh snow a month later only to run through the freezing air for an hour just for 10 minutes of relief. I remember the leaving. There were boxes and big black trash bags packed with clothes. We made small pumpkin pies together that night but discovered that we had forgotten to add sugar.

She said she was moving, but I knew we were ending. The truth, it’s hard to determine, it always is, but I believe that I broke my own heart, by fault of my own expectation. It could have all been worse, but its authenticity was undeniable, the grief I felt, the purgatory between forever good bye and just plain leaving, was real.

Grief exists in all of our tiniest trespasses. Sometimes I think I don’t deserve to feel the way that I do, that it wasn’t enough, but maybe we weld ourselves shut when we talk ourselves out of our small losses and miniature victories. When we disregard the first hurdles we meet and inch our way around them we can’t possibly be strong enough to run up the mountains to come. When future paths are flanked with deep pits and barbed wire and the only direction we can go is forward. A week ago, I could have talked myself out of every big emotion.

During the All Souls Procession, I felt like a fucking tourist, as I change-stepped under signs and momentos. My friend Jeremy said to me, “All these people here, they can’t see us. We are invisible.” He was referring to the face paint. We were ghosts, he said. I knew he was right, about me at least. I was transparent, a body who was not missing another close body forever.

Once, desperate to make my desire legible
I scrawled your name on my chest, backwards,
so in snapshot it would read forwards.
Sent you the photo of white cleavage, black bra,
black scratch of letters
you said nothing.

For weeks, you said nothing.

and I replied I am a person and you replied this person
and showed me my boobs with your name on them
before apologizing I’m not much of a person.

I should be more careful with ink.

I like to imagine vanishing
without losing legibility. I picture
this desert sun bleaching my skin as if
bones, an appearance that fades into
translucence until I arrive at transparency.

I like to imagine being as transparent as a whore.

You never misrepresented yourself.
I always misinterpreted you anyway.

a girl in a box
a man with a saw
everyone knows what comes next:
magic 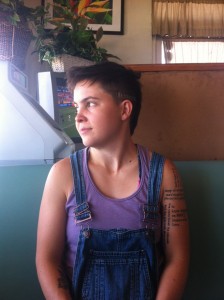 Em Bowen is a storyteller, a writer, a sister, a mess, a cat-owner, an editor, an incredibly stable human, never a girlfriend, occasionally a boyfriend and always changing (much as we all are, whether we realize it or not). They have been published online, in print and on stages across the West Coast, but feel they are just getting started. They are presently working on their MFA from Goddard College and are the current host of A Queer Open Mic and the creator and producer of the Tucson Gender Identity Project. Their work pieces through the human condition, queerness, honesty and the ways in which we learn to survive better. 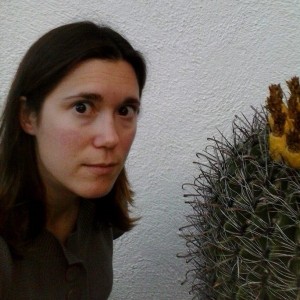