As though by going back to it now it would become clear—or more than that, say what you mean, come right, a resolution of the leaves piling up in the yard, then turning to mulch, behind the house the blackberry bushes taking over the length of the garden.  In the summer the bushes thick with berries: she’d go out with a plastic tub to fill, my mother, and I would think that letting things go like this, if that was what it should be called, was just another way of living, as a monk who also lives alone has chosen a way of living, and so it was okay, how she’d sleep in the afternoon, how when I’d first come in she’d call hello from upstairs, her voice confused at first, tentative, like a child who has learned not to speak out of place.  That fall, or rather, that month between summer and fall when I stayed with her, each day was similar to the next, running in the mornings up the road past the green field, the cemetery, fog on the field each morning lifting by ten.  The house an old house, dark in the living room until evening, though then that room would be flooded with light: a novel, my friend told me once, is about something ongoing.  A story is about when something shifts.  And a poem, I realized later I’d forgotten to ask, is a poem what is called dissembling?  The thick, sweet blackberries in my hands when I picked them, arms and fingers turning dark from the juice.  Her small body in the bed upstairs, not asking for anything.

We drove from Portsmouth up into the mountains together,

or I drove while Diane talked and told stories,

her black hair over her shoulders, light on the granite hills around us

as we drove inland and away from the ocean

that had clouded the road from my mother’s house with fog when I left.

The road we took climbed into the mountains, narrowed,

and turned, then, to an inn; it really was an inn, like in the stories,

and like in the stories it was called the Horse & Hound,

wooden floors and ceilings, the owner’s beagle wandering in the grass.

And my friend waiting for us in his small straw hat—

cloth napkins at dinner with the others, lunch on white plates,

rain falling against the windows of the library

while Diane looked at pages of our poems, saying purity

is a kind of tyranny, tyranny always concerned with the pure,

so I think that I could lay my head in her lap, it seems that even this

could be done there, though it’s not; she’d let us say what we wanted,

could stay intact: my mother still a child in the beach grass,

the dunes; and Diane, having come to the edge of the woods,

a darkling thrush, not coming any further but far enough. 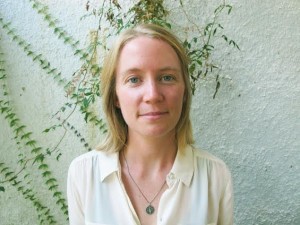 Margaree Little’s poems have appeared in American Poetry Review, Beloit Poetry Journal, New England Review, The Missouri Review, and The Southern Review.  She earned her MFA at Warren Wilson College and is a recipient of a 2013 Rona Jaffe Foundation Writers’ Award.