To Hell With The Goddess: In Celebration of the Human Person Audre Lorde – The Feminist Wire

Home / Audre Lorde / To Hell With The Goddess: In Celebration of the Human Person Audre Lorde

To Hell With The Goddess: In Celebration of the Human Person Audre Lorde 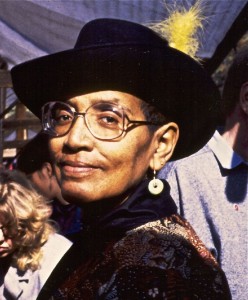 Even as I write these words I myself feel some ambivalence in regard to the “To hell with” in this work’s title.  For haven’t I, like countless others, also worshipped at the Goddess-Audre’s temple?  Haven’t I, like so many black queers and others, worshipped the woman and the icon, the Poet-Goddess and the Black-Lesbian-Warrior-Mother-Poet mythic construction?  Worshipped – naively, in my case, and sometimes even stupidly, but always, as one might worship Christ or Allah, with great sincerity – the mythic presence that Audre herself, through an often grandiose and imposing presence, clearly sought to establish and leave behind.

I did worship that Goddess, that Poet-Icon, that Mother-with-a-capital-M, as Audre herself was known to encourage people (and, according to varying accounts, especially younger black women, and most especially women of all races whom she found sexually attractive) to regard her.  I worshipped her as all of the above even when, in perhaps hypocritical, and certainly mean-spirited moments, I regarded with rolled eyes, discreet scorn and even mild contempt as so many black women (even dear friends of mine) ostensibly starry-eyed and worshipful of the Warrior-Mother-Goddess, steadfastly disregarded and appeared mostly unwilling to regard critically Audre’s less admirable behaviors.

Those women and I, and a great many other men as well, genuflected uncritically before the various altars so many of us –understandably — fashioned in homage to Audre, particularly in the years immediately following her death. Many people continue to pay uncritical homage to Audre-the-Goddess today, and insist on speaking of her only hagiographically, obscuring the very real human being beneath so many recurring mythmaking projects.  I wonder now if some of our wholesale embracing of Lorde-as-Goddess – and the fetishizing, romanticizing, deifying, and mythicizing of Lorde that continues today – has much to do with a great many of us (black queer people in particular) coming of age in a generation before which there simply had been extremely few visible models of such political bravery. She offered intriguing, useful (for “survival,” Audre might have averred, correctly) complicated as well as complicating, intellectually and spiritually demanding political thought and practice.

Because in truth, for those of us who came into political consciousness in the 1980s and 1990s, when had there existed anyone as visible and daring as Audre?  Someone like her who, time and again, brought into such sharp focus black (mainly, though not always exclusively, African American) lesbian politics in combination with general racial and gender politics, social class analysis?  And someone who, as she did, connected all of these politics and more to inescapable geopolitics, and to the deeply vulnerable yet potentially powerful place occupied by each of us in the “racist cauldron” of “america” of the developed West, and other parts of the world?  Who else, so bravely risking her own skin and soul, had provided us with such necessary bread as The Cancer Journals, A Burst of Light, Sister Outsider, and Zami: A New Spelling of My Name, to say nothing of her multiple volumes of poetry?

Who, indeed?  For perhaps finally she was one of the very few who spoke so urgently and immediately – and daringly – to so many of our souls; who spoke to the innermost place where the need for truth and love (and often, if not always, honesty) is greatest.  Certainly she was the only one who wrote those books, all of which I carried very close to my chest for years, and which at times – with the wide-eyed-ness and profound needfulness of youth – I regarded virtually as talismans. Before she had written them, those books, and the scorching yet bracing truths articulated within them, simply hadn’t been there for the trembling hand to select in great anticipation and who can only imagine how much need, off the bookshop or library shelf.  Yet in 2014, I find the abiding hagiography not only problematic and simplistic, but also not particularly useful for intellectual and political growth. By intellectual and political growth, I mean growth of perhaps the most difficult kind: that which demands that I and others leave Audre-Mother’s nest and fly, fly on our own out into who knows what and in the face of which continual dangers, though surely adequately prepared with the lessons that Audre’s writings – and the writings of many, many others – have provided us. 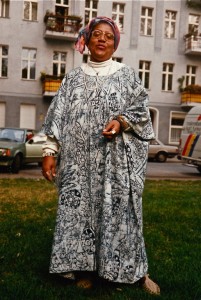 Worship of the goddess-Audre is seems simply uninteresting in and of itself at this point, even as it remains fascinating, in 2014, to observe those who (as one has encountered them here and there at political/activist gatherings, on university campuses, and occasionally in literary contexts) so devotedly continue the practice.  For surely a good number of those who continue to worship Audre as a Goddess and ignore the human person  — the highly flawed human person described in (for example) Alexis DeVeaux’s biography of Lorde, Warrior Poet (considered controversial and even traitorous by some for its descriptions of some of Lorde’s more problematic behavior) — are highly intelligent people. Yet in their worship of the Mother-Matriarch they blithely, even willingly, overlook the facts that, as the book documents, Lorde was often a philanderer (and thus dishonest, or, more to the point, a liar); and could often be unqualifiedly self-centered, egomaniacal, manipulative, bullying, shamelessly self-aggrandizing, and downright physically abusive in her intimate relationships.

If it was startling and even deeply upsetting to hear a close black woman friend tell me that, during the time she studied with Audre at Hunter College in the 1980s, and deeply admired her during that period as a role model, Lorde on several occasions made categorically contemptuous remarks about homeless people in New York City and how so many of them “need[ed] to get a job,” this information, like the unpleasant realities disclosed in Warrior Poet, was also illuminating, broadening, and a breath of welcome air after the relentless years of mythmaking. Audre: Human. Can such a thing be possible?  Yes. One certainly derives no pleasure from learning that Audre occasionally physically abused her partners and behaved toward some women in ways that today would clearly be considered sexual harassment. And of course one would rather not think of her as a person at times inclined toward deceitfulness and dishonesty (and occasional self-righteousness) – a woman who, through all of her contradictions, gave so much of herself to those who so needed her words even as at other times she appeared to believe that her very urine was composed of gold.

But here, in all her unpleasantness and generosity, in her greatness and magnanimity and her baser moments, we encounter the living, breathing person, also known as the real thing: the same person who was a literal mother to her two children, no matter how she loomed to the rest of the world.  And so here, in the colder, harder, more realistic place that is and must be here, I jettison my more callow need to revere for all time Audre as Mother and Goddess.  Here, in the harder place, she is simply what she has always been: a woman.  A human being, neither more nor less; and a human being about whom one can, as another human being, deeply care, even as one gazes critically at her foibles and falsehoods while simultaneously delighting in her utterly matchless words.

Perhaps in the last analysis it is my fiction writer’s imagination that seeks and desires so urgently the more human Lorde, as I dispense with the redoubtable Goddess.  And indeed, perhaps such dispensing is the ultimately necessary luxury that both time and perspective – as well as maturity and a deepened gaze – permit us. For in writing fiction, I certainly do not want – to fashion characters who are icons, or infallible (black and otherwise) matriarchs.  As a writer of fiction, I have no interest in people who are always right, in people who can never do wrong, in characters who are above critique (including “elders”), or in individuals who, on the face of it, do not ever sweat, defecate, possess body odor, nor menstruate.  As a fiction writer, how much more exciting it is to seek out the complex and complicating character: the one who both frustrates and endears, who can outrage and even disgust, and at the same time, sublimely intrigue, and even seduce.  The character whom, one might say, both smells the world and smells of the world, and smells of us in the world.

This is the same sort of imagination that wants, in both fiction and real life, to hold black people accountable, when necessary, for our occasional stupidity and wrongdoing, while regarding us with compassion and abiding powerful interest (and love, and sometimes profound exasperation).  The same kind of imagination that would like to enter into discursive engagement with people, women and men alike, who insist still, to the detriment and truncation of the deified, on deifying the likes of Audre Lorde and others.  For if we listen to her words, I might say to those people and to myself as well, those words might be enough.  Enough to help us move toward and through a future which we are inevitably providing ourselves.  We really don’t need altars. I have already spent more than enough time on my knees engaged in all sorts of worship.  Let us read her words, and proceed.

Read her words impelling us all toward a more possible, more human future.  Then let us bravely regard that future.  Regard it now, in fact, as it ambles directly toward us, bearing in its arms before us the entire limitless world. 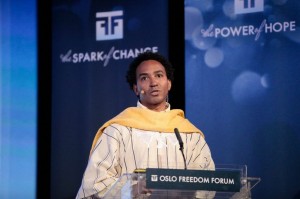 Thomas Glave’s fifth and most recent book is Among the Bloodpeople: Politics and Flesh (Akashic, 2013).  A two-time recipient of the Lambda Literary Award and a finalist for the Dayton Literary Peace Prize, he has been Martin Luther King, Jr. Visiting Professor at MIT, a Visiting Fellow at Clare Hall, Cambridge University, and is presently Leverhulme Visiting Professor in the Yesu Persaud Centre for Caribbean Studies at the University of Warwick, UK.