By Guest Contributor on February 5, 2014 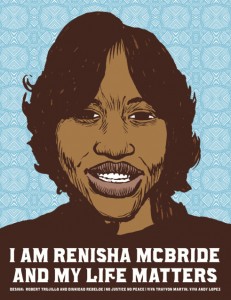 Even now you are being explained away

your body laid on the coffee table and

operation only you can’t tell us when we

have touched the truth

the dead are the most vulnerable of us all

your parents most certainly have pulled out

the stories of you which showcase

the ways in which you were human

though black, though female

going to meet the Lord

Even now, though, they are skinning your life

with their teeth, chopping

the meaning from your body, grafting

your arms to criminal, your face to threat,

your body to reasonable doubt

And we are watching, clamoring justice, justice

to be filled with a validation of black

female scared and confused lives, yours 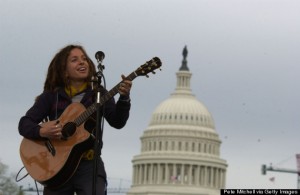 I have heard you, as a person can hear the river which no longer reaches the ocean, the humming of dead bees, the necessary chains which built this country. I have heard you

when I found out I could not hide from these places that lived in my skin, that I had eaten and regurgitated this Dream looking for omens to share with the People only to be faced with a Righteous Choice, I chose to go home to my bed each night

the setting would become a participant: I would heal these dead brown bodies. I would tread on the bones (no) draw the poison. I would envision myself free. The place would not hurl epithets at me, I would lay hands on her verdant body and she would passively offer me her stories. [that is not my place]

I imagined a dialogue would emerge organically unlike a forced migration across a world, it would not inhabit my body like a foreign penis or a foreign land or a foreign language that owned my life. It would not take up too much space on the agenda. it would be without struggle; like shuffling black bodies during low tide to the suburbs; or the bullet that found its way to renisha, to leon, to jonathan: tragedies

tragedies on a massive scale are not easily recovered from so this bubbling over of rage across screens has melted my intestines; I have been licked by the acid of your words,you have uncovered the scars on your backs that are the blueprint of America. Compassionate energy is necessary: even though I am white:

I Can Do This Work! it will be an Magnum Opus. My porcelain skin will be delicately touched by the sting of history and I will go home to my bed each night and meditate on what has happened—

i underestimated the power of evocation. whose land is this, whose voices are speaking to me? whose ancestors are riding them like horses  today, spilling this pain at my feet, into my eyes, on my brain? i know the pain of slavery is real

one cannot draw a line, however, between my actions and the heirloom of whiteness that i possess; the speaking of the stories without knowing them; the majesty of the big house and the rumors of slave quarters now gone. Our country’s history of slavery would necessitate moving far far away

moving far far away from the heat of revelations, from knowing genocide dwells among us like a polite guest and refuses to leave and so I will look far far away: should hatred be spit at me?

that energy is precious, I do not wish to remember what it means to listen. To be quiet in the darkness and hear the wailing under the anger and know it is not there to feed me; but to remind me of the work that makes me human; life-affirming connections

I will not give away my Sapphires

whose sharp angles have mourned

my death with prizms of tears rebuking

the angel who came for me unsent for

back to the dry places. whose native

tongue is hidden under duress

whose harshness cradles justice in the

cut of their eyes and tells the truth through

the stinging teeth. whose scars are songs

sung in hatian and southern and anguillan and

trini fields. who kiss the past with their pain

and dare me to look

I will not give them over for the squandering, the gaze

the easy flatness. a digestible existence for

the conscience of cannibals

i will not look away from my Sapphires

glittering in the night, relentlessly provoked

by the traction of the stars on uncharted

soul territory looking for a fiercer god than hatred

who have been intimate with ugly and have lived 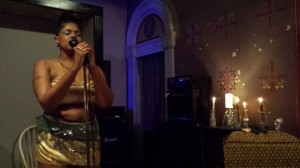 Joy KMT is a healer, artist, activist and lover. She has been invited to facilitate workshops at Kinks, Locks and Twists, an Environmental and Reproductive Justice Conference, Healing the Hurt Conference, and Howard University. She is a co-founder of Ujamaa Collective, an organization dedicated to economic justice for women of African Descent. As an organizer, she convened the African Holistic Parenting Conference and the Black Mommy Circle. As an artist, Joy KMT is a MacDowell Fellow and the recipient of the Heinz Fellowship. She is the producer of Her Voice: The Stories, Tales and Myths of Women of Color which premiered in the Sunstar Music Festival and Testify: A Black Womanhood Series. Her poetry has appeared in Check The Rhyme: An Anthology of Female Emcees and Poets, Amistad: Howard’s Literary Journal, Black Girl Dangerous, Blood Lotus, an Online Literary Journal, Backbone Poetry Journal, The Feminist Wire, Pluck! the Affrilachian Journal of Arts and Culture and is forthcoming in Near Kin: Words and Art inspired by Octavia Butler. You can find her at www.facebook.com/KMTjoy

Related Itemsani di francoarts and culturePoetryprivilegeracismRenisha McBrideViolence
← Previous Story Personal is Political: What’s it Like?
Next Story → A Call to Action for Women of Color in Academia