Personal is Political: What’s it Like? – The Feminist Wire

By Guest Contributor on February 4, 2014

After the first and last time we slept together, she asked, “So what’s it like to be the third?”
I wondered if she was trying to read my intentions.
“I used to be in your place,” she continued. “It was nice to be able to walk in, live out my fantasies, walk out.”
Was it hard for her to believe I wanted to connect with two people? I asked myself as I laid naked beside her in bed. I don’t ask that anymore. Now, I think her response was a warning, a foreshadowing. These are your limitations, Rosa. This is all we are expecting.

The day after we cut each other off, I felt a hangover of sadness. My friend, who I tearfully drunk-texted that night, wrote back, “Don’t get it either. How can people get so close physically, yet be so far apart in every other way?”

I imagine myself writing to them: I can better answer your question now. I still remember what the different creases and corners of both your bodies smell like. Wet and dry. I let your hard dick fill me up as I grinded you. Repeatedly. I felt the contours of your insides with my fingers. And I kissed you both passionately. Damn near tearfully. And at the time, gratefully. It’d been a year since I unclothed myself for another. Crazy as it sounds, I wanted to do it to you both and have you both do it to me. What’s it feel like to be the third? It feels like falling into my own deception. Like getting played.

But I’m not willing to accept this self-justifying version of the story.

The first night we slept together, I brought light purple mums, his favorite whiskey, lavender oil, and a book of self-revealing questions. When he flipped to the category for sexuality, I studied his usually reserved demeanor. My answers depicted an adventurous and sloppy sexual history; her answers were painted in lived up red fantasies. He skipped a bunch of questions that have less to do with kink and more to do with a deeper, more complex sexual history.

“Downers” were what he called the questions in the categories of fears, family, and ego. I didn’t say, “Well, no, let’s look at what they’re asking” or “I can answer those for y’all.” I wanted their getting to know me to feel like swooning, not therapy. I neglected my own desire to keel over to them by undulating some parts of myself through their deep-seated blues. So, I focused on something else I love to do.

After we ate, I kneeled behind his torso, oil in hand. He pulled up his shirt, parted his long locks in half over each of his large shoulders. With closed eyes and greased hands, I rolled the tips and bents of my fingers through the knots collected beneath his sierra, tatted skin. I fought to keep the richness of his skin from filling me up so much that I couldn’t focus on kneading the tension. Slowly, I felt each knot give up its stubborn taut as I slid my hands along the stretch of each blade. I loved that whatever I was doing was putting the violent coughing spells he was having to a quiet calm. I loved how his woman watched the tips of my fingers, pressing and whirling on her man’s back.

Without hesitation, she pulled her shirt over her head, exposing a golden olive back. I placed her locks in front of her shoulders and pressed the warm oil along her neck. Eyes closed, I trickled through knots, pebbles scattered along the soft and rounded shoreline of her shoulder blades. There was ample woman to push into, ample woman to grasp as I pressed along her back. “Mhm…Very shapely. Just like you posted.” I turn, my hands still working, to say to him, “Real pretty.”

“Yes, very shapely,” he replied. “And very, very pretty.” His legs stretched across the mattress, as he reclined against the wall, grinning, watching. Her eyes remained closed as I tugged her locks and tilted her head to the side so my lips could reach her left shoulder, the one her man could clearly see.

After three weeks of online exchanges, a week before he handcuffed me onto their bed, I met her for the first time. We walked the 3.1 mile Lake Merritt. Despite the texts about wanting to do things to each other’s bodies, our exchanges were about communicating to the people we love, forgiveness, and whether we were making the right choices mothering our black children. She went home and reported to him.
“She appreciates your beauty, too,” he texted back.

“Do you have a favorite moment with us?” she typed over chat, days after our first encounter. I remembered when I first met them together at my house, over dinner, on Christmas Eve. He had a court date having something to do with his three children and their mama. He didn’t want to talk about it. Instead, we watched The End of Eating Everything, a film short by Wangechi Mutu, one of her favorite artists, featuring Santigold as a beautiful Medusa. We wondered why the colony of ravens attracted but feared its predator. The sentences about being helplessly pulled into an undesired journey. Whose are those—the predator’s or the prey’s? When I shared the work of Kara Walker, we talked about translation and audience. We wondered whether the vulgarity of silhouetted scenes of rape, castration, and rebellion in antebellum slavery was a translation of our collective pain to whites or whether these images were intended to wake us up from the self-negating white gaze.
“I love relating at that level with you guys,” I type back.

I wonder now if saying clever things about art and the world is really enough to “relate.” At the time, it was enough make me want to put my hands and mouth on parts of their bodies. But I wasn’t convinced we weren’t using desire as a way to slough off sadness, loneliness, or some bruising within or between them I wasn’t allowed to see.

A few days before I left, we were sitting at a café, typing, working.
“What are you working on?” I asked him.
“Real estate. We have landlord issues. You?”
“The memoir.”
He lowers his laptop closed and moves aside the other noise-canceling headphone.
“What is it about, exactly?”
When I told him what I mean when I write about escaping womanhood, firing through emotionally and physically risky sexual escapades, he tells me he knows something about that. Escape.
“Yea? What have you escaped?”
“I don’t really want to enter that mental space,” he said.
I thought about the way his soft kisses felt like a forgetting, an invitation to new, joyful memories.

“I’m angry at myself for wanting more,” I write in my parting text. I should have typed “wanting more too fast.” It’s easy to feel like dating a couple was some desperate attempt at seeking something I haven’t found with one person. That’s a lie. My experiences with individuals haven’t been any less wild or less tainted by the need to love and be loved. I’m writing to figure out where exactly the broken parts of me are. I write about chasing feeling in my memoir, and I question why I’m still not patient enough to allow love to take its time.

“I sometimes wonder what is your problem? You appear GREAT but you have to be some kinda crazy somewhere/how. Do you carry an ax?” he typed over chat, somewhat jokingly, the day before I walk out.

It’s the realest question he’s ever asked, but I jested, “I have a pet cheetah. His name is spot. Other than that I think I’m pretty functional.” I don’t know if needing to love and be loved as much as I do is functional.

I rubbed his feet while the heating pad worked his back. We watched the slow, cinematic scenes of Fricke’s Baraka. She and I finished the wine and started whisky shots. We talked about filming the sacred before realizing he’d passed out. We started to play. Clothes disappeared and we tasted, touched, and grinded before our mouths were at his groin. He wouldn’t stay hard for us, and she pulled his sweats back up.
“I’m sorry baby,” he told her.
I got up, clothed only in darkness, looked for my shot glass and the whisky. She kissed him and laid down. I tried to engage her. Her kisses fainted.
“I’m not too far behind him,” she said, and closed her eyes. The storm of desire I walked in with that night began to morph into something terrifying.

I dressed, sat beside the futon, drank water, and the tears fell out. I texted my friend,
“I’m still tryna figure out what this lovin thing is.” I thanked God somebody got up, read, cared, and wrote back.
Although when he typed, “Maybe u need more time to feel it,” I didn’t want to read that.

Two hours later, I collected my things, the unfinished whisky, and tip-toed through the door. I sat inside the car, windows rolled open. The cool air did nothing. It kept coming. Loneliness is beast.
“Fuck fuck fuck all this fake shit. I’m looking for real. Real. Where the fuck is the real?” I posted to Facebook. For thirty minutes, I used a cloudy mind to think about what that really meant. Something was breaking.

During the hour-drive down MacArthur, the chill and Vivaldi’s violins kept me distracted from sleeping and dying. In the morning, I picked up my phone and typed, “I’m writing this as I’m feeling a lot but lacking the clarity and words to piece it all together. I think you two have a beautiful thing. I’m angry for wanting a lot, but not sure I know what I need. I think there’s a difference. Anyway, thank you for the blessing. You are both glowing with wonder. I don’t know where in that I really belong,” and hit send. No reply. I waited, dressed, then checked gChat. Unauthorized accounts. They cut me off.

Two days later, I’m trying to be reasonable. Perhaps they thought some sort of climactic exchange would ensue. Or maybe our connection was only coming to fruition in my hopeful imagination. My friend texts me, “They missed out.” I think he’s being nice. They repost the same Craigslist ad that inspired me to think about loving differently:

Well-educated, attractive Black couple, seeking a woman of color to date…we would like to add a third to our happy union.

There’s a lot I’d like to know that’s not worth knowing. Wanting to know the reason behind the sharp cut-off has more to do with turning away than looking in. Inside, something is breaking. By writing, I try to figure out what my versions of memories mean about me, and what I haven’t yet figured out about loving. 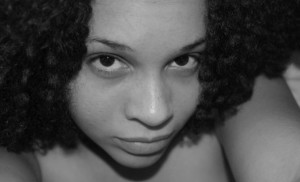 Rosa Cabrera is an MFA candidate in the Mills College Creative Writing program, and is a former New York City high school English teacher. She is the founder and facilitator of InkRise, a writing workshop designed for survivors of violence. She is currently working on a memoir, Full of Grace: A Dominican Girl’s Attempted Escape from Womanhood, and blogs at The Song Inside the Stone.

Related ItemsLoveSexSexuality
← Previous Story Personal is Political: Should I Be Telling You This?
Next Story → Three Poems by Joy KMT