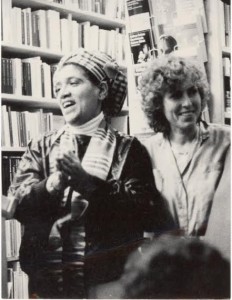 With this contribution I want to relate a few of the many voices that illuminated Audre Lorde’s impact after viewing the film“Audre Lorde – The Berlin Years 1984 to 1992.”

When Audre first arrived in Berlin in 1984, I was the co-publisher of Orlanda Press (then sub rosa Frauenverlag) and we published several of Audre’s books in German. She came to Berlin each year until 1992 (except for 1985 when she was at the anthroposophic Lukas Clinic in Switzerland).

One of Audre’s first questions upon arriving in Berlin was, “Where are the Black Germans?” She soon established close contact with Black women, some of whom attended her classes at the Free University of Berlin in 1984. As a result, we published the book Showing Our Colors: Afro-german Women Speak Out in 1986.

Once Audre was in Berlin, I recorded her both on audio and videotape, as well as through photography. Audre talked of herself as a photo bug. She considered me her “house photographer” and it was clear to her and to me that I would eventually do something with the photos and videos.

In 1989, I worked closely with Michelle Parkerson and Ada Griffin, the filmmakers who made A Litany for Survival: The Life and Work of Audre Lorde. They came to Berlin to document her time there and her unique role in igniting the Afro-German movement. The Berlin years were only briefly mentioned in Litany. After Audre’s death I realized that all my material should be used to tell this little known chapter of Audre’s life.

In 1995, I started with the idea of making a film and video recorded an interview with Audre’s partner Gloria I. Joseph. My vision of the film was to show Audre on stage and off stage. I wanted the film to become a project of “archival activism”. It took however 15 more years to realize this project.

Third World Newsreel (TWN) let me purchase copies of material they had filmed with Audre in Berlin and had used only in parts. Two Afro-German friends, my partner Ika Hügel-Marshall and our close friend Ria Cheatom, co-wrote the script with me. Both of them are in the film as interviewees and protagonists. Aletta von Vietinghoff, editor of the film, cooperated by consolidating our four-hour script into a manageable final 79 minute product.

The reception of the film

The most important initial indication of a public positive reception was the acceptance of The Berlin Years by the international Berlin film festival, Berlinale 2012. Within two years the film has been shown at 54 festivals in 21 countries and more than 100 other screenings. We created the “Audre Lorde’s Legacy Cultural Festival” and travelled with it across the United States. Everywhere the film received enthusiastic responses and often raised discussions about identity issues among people of color.

My favorite part is the juxtaposition of Audre’s serious poetry with her joyous dancing and being teased by her partner Gloria. Her grudging reaction to Gloria’s teasing allows us to see her being human, not perfect. 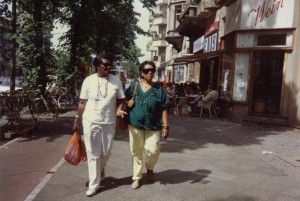 African-American university professor, Kim Hester Williams from Sonoma State University, related that her students often find Audre Lorde intimidating and that she herself always thought of Audre as a very serious person:

“[The Berlin Years offers] a very different and complimentary side of her…This is an essential teaching tool.”

I love how the film depicts my mother’s humor, and how she found so much laughter in her loving relationship with Gloria Joseph. I think she would have loved the film—she adored the quote from Zora Neale Hurston, ‘I love myself when I am laughing—and again when I am mean and impressive,’ and I think this film does a great job of showing Audre Lorde fighting fiercely, Audre Lorde galvanizing a movement and reveling in the work of her Afro-German sisters, and Audre Lorde dancing, laughing, and loving in what proved to be the last years of her life.

The transnational and transcultural dimensions play a crucial role. Audre herself attests to this aspect at the beginning of the film: “I feel myself sometimes in the tradition, in the old basic tradition of a traveling cultural worker.  That’s right, just like the troubadours crossed continents singing the things they felt and believe. That’s how I often feel. To begin with, I love to travel. I love to experience new people in different places, in different way…and to learn, to learn.” It is this genuine desire for exchange which characterized Audre’s interactions. Elaine Castillo writes; “… Audre did not come to Germany with the aim of exporting a kind of American feminism, but with “the hope of diversifying the landscape of feminism everywhere.” 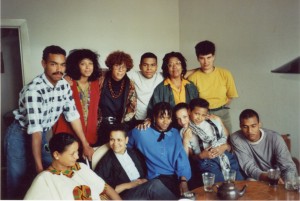 Sara Ahmed also touched on this transnational dimension in her introductory talk at the Fringe! Queer Film & Arts Festival in London in April 2012:

We learn especially of the importance of a transnational black feminist politics: of what can happen when African-American and Afro-German women speak to each other, when women of colour across the diasporas speak to each other; between generations, across time as well as space.

Incessantly, tirelessly she was trying to connect with people and to connect people with each other – how much joy she found in that.

There is something about Audre’s work and Audre’s life that brings people together in this wonderful solidarity … that acknowledges differences.

Intergenerational aspects come to bear. Members of the older generation emphasize that

whether you’re black/feminist/ female/lesbian/into poetry… generations of women continue to be influenced by her.

A young U.S. reviewer writes that

Audre Lorde’s persistence inspired me to ask myself what I am doing to live a self determined life.

Archival activism involves awareness of the past and readiness to evaluate the present and purposefully move toward a vision of the future. Sara Ahmed writes:

Audre showed us how feminism can be about new ways of being in the world, suggesting that if we do not use the master’s tools, if we build with our own hands, we can create new dwellings …I do think of her as a feminist killjoy…And we learn from this film that the life of a kill-joy can be a life full of joy, the joy of possibility, the joy of world creation.

The festival is like a medicine show, like a seedling that you take around…there are so many people who don’t know Audre – the younger people. So this is a seed that is moving through the world. And … it is visual story telling, the intimacy of those kinds of moments in life that we don’t often get to see…very very deeply moving.  And then – all the laughing!

Feeling touched and inspired, feeling compelled to continue The Work – these are the themes that keep coming up in the reactions to the film and in the memory of Audre:

Peter J. Piercy reports the screening of the film at the Fringe! Festival in London in April 2012:

Amazing, and testament to her awesome power that everyone felt inspired to be bolder and more ambitious in their own work and activism, and buzzing with ideas about things they wanted to do next.

For Tova Black (Chicago, Illinois) the most significant lesson was that

we all need to tell [our] story… because no one can tell it for us. And my favorite quote, ‘for when trying to convince others to simply give your words a chance, I am not TELLING you to agree with me, I am only ASKING you to think about it.’ The world was a richer, brighter, more promising place with Audre Lorde in it. I am thankful that you were able to not only capture her words, but also her poise, her energy and the strength of her spirit. She led so many when she was living in the flesh, and she leads so many more now that she’s transcended. She’s no longer restricted by the physical body, she is any and everywhere she pleases. When you watch this film, you can’t help but be inspired by her because you FEEL HER. Peace and Love.

Elisa Joy White (Hawaii) responded to my question on the aftereffect (of the Audre Lorde Legacy Cultural Festival):

I think Audre Lorde and her presence is always about the aftereffect. She walked into a room, she spoke, and it resonated beyond that room and those who were touched by it in that moment went out and passed it on.

provides that kind of inspiration that helps you to get over those feeling, at least it did that for me, and it made me become more excited about doing The Work.

The focus is on the Berlin Years, but it felt like … (the film) opened you to her whole life…her sense of an African diaspora was very powerful, and where that came back in to a human family…so much of her was spirit…towards the latter part of her life her poetry would come out as singing and that singing stayed in my ear…the cadence just comes, and it is…just pure spirit and anbody who is an artist or a writer, just a human person, a social activist, seeing this is just very powerful affirmation. I feel like doing more what I want to do.

It is these voices which Audre would have liked the film to evoke. Through the making of the film, I and others lived with Audre in intensive ways again. Thank you, Audre, and may your spirit inspire us and many people in times to come.

The website of the film Audre Lorde – The Berlin Years 1984 to 1992, contains many reviews, viewers comments, the study guide which, Dr. Marion Kraft developed as well as some material of the 70 min extras which are on the DVD. There is also a YouTube channel one can access on the site with many interviews with a most diverse group of viewers and with Q&A excerpts from the US, Canada, the UK and Germany. www.audrelorde-theberlinyears.com 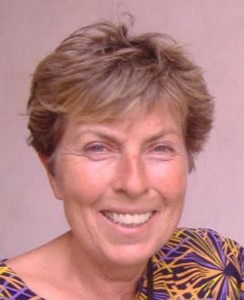 Dagmar Schultz was born in Berlin and started her studies at the Free University of Berlin before going to the University of Michigan to study film, television and journalism in 1963. During the 1960s she was active in the Civil Rights Movement and the women’s movement. She taught at several colleges and universities – for example at Rust College, a Black college in Mississippi in 1965/66 and worked in Puerto Rico. In 1973 she returned to Berlin and taught at the John F. Kennedy Institute of North American Studies at the Free University of Berlin. She co-founded the Orlanda Women’s Press in 1974 and remained it’s (co-) publisher until 2001. Dagmar Schultz arranged for Lorde to be invited as a Guest Professor at the John-F.-Kennedy Institute in 1984. Schultz edited “Macht und Sinnlichkeit” Selected texts by Audre Lorde and Adrienne Rich and Orlanda published further works by Audre Lorde. In 2011 Schultz was awarded the Margherita-von-Brentano-Price 2011 for work which furthers the equal rights of women in academia.The funds of the award contributed to the production of the film Audre Lorde –The BerlinYears 1984 to 1992 and to the establishment of an Audre Lorde Archive at the Free University of Berlin, which contains all of Schultz’s materials on Audre Lorde. See website: www.audrelorde-theberlinyears.com. She is also the co-producer of the film Hope in My Heart: The May Ayim Story by Maria Binder.