All In a Day’s Work, or An Incomplete (Chronic)le of Illness – The Feminist Wire

Home / Culture / All In a Day’s Work, or An Incomplete (Chronic)le of Illness

All In a Day’s Work, or An Incomplete (Chronic)le of Illness

Writing about my chronic illness is a tricky undertaking. Sitting, thinking, and expressing myself will almost certainly render my body more aching, more dizzy, and more confused than I was in the first place.

If I do try to spill my thoughts somewhere, there’s ritual involved. When I wake up, I identify what hurts. Usually I have a strange fever

of sorts. Extreme nausea. Heavy headache. Deep, aching pain in my legs, back, arms, neck. Ringing ears. Cold feet. Usually it takes an hour or two for my mind to make clear thoughts. I’m a fog child for a while, sometimes all day, but if I’m lucky, just for a while. Depending on my level of energy, I might be able to eat something, slurp at a glass of water, take a Tylenol if I‘m feeling wild. But usually, I unfurl my creaking limbs into a sitting position. I fumble for my computer and I stare at the wall long enough until semi-coherent thoughts form into legible words and dare my fingers to try to make them appear on a screen.

For me, sickness is a difficult notion to represent. But it’s being done.

Annie Murphy’s 12-minute film, “Shit People Say to Sick and Disabled Queers,” was featured at San Francisco’s National Queer Arts Festival during a show called SICK, which explored chronic illness through a genderqueer lens. With brutal accuracy and dark wryness, the film depicts various ablest comments, questions, and behaviors often faced by people with chronic/disabling illness and conditions. Halfway through the film, the conversation shifts. It’s no longer just about what people say to or about sick folks. A new title clip introduces: “Shit Sick and Disabled Queers Say.” In the following scene, there is a person onscreen, lying down with covered eyes, who with effort announces the first take of the segment, saying “Take one.” A quick cross-dissolve transitions into the next clip, the same speaker announces the same title, but now it’s take two. After these words are uttered, there’s a pause, an intake of breath, and “Why did I agree to do this video…?”

While the film’s content should be appreciated on multiple levels, what I am most moved by here is the careful and critical demonstration of what it means for many individuals with chronic illnesses to actually represent themselves. To be sick and to be involved in a process of communicating one’s sickness involves a series of chronic repetitions, aching articulations and dizzying reconsiderations of the process itself.  Writing into this blank page at this very moment, I am inconsistent. I stop after typing a few sentences to lie down to wait out a hot flash or sit through the deep urge to vomit. As I literally fluctuate over and over again, I wonder about my own message. Am I able to translate my illness into words? Can I make meaning or sense out of this condition (or, moreover, does whatever I write, say, or ‘produce’ actually mean anything if it is written in sickness, if its form reflects the strangeness of my body, if my method falls outside of normative conceptions of communication and production?)

Last spring, I was (somewhat surprisingly) able to attend a talk by Elizabeth Freeman, an English professor from UC Davis. She shared

a paper-in-the-making with the Gender and Women’s Studies department at UC Berkeley (1). Part of Freeman’s talk analyzed a novella, Melanctha, by Gertrude Stein, whose protagonist is a chronically ill woman of color. The language through which Stein’s character communicates is strange in that it is extremely repetitive. The same thoughts, the same dry-bone phrases are uttered time after time – in a similar mode of my aching body as it navigates the morning. But maybe, Freeman suggests, these repetitions are more complicated than they appear. Maybe the repetitive routines and patterns aren’t just about monotony.  Upon closer analysis, Freeman explains, the words of Melanctha vary, slightly and barely, but just so – shifting in form and content each time they reappear. My body, too, is not simply a repeating, predictable collection of mechanisms and routines. Freeman calls for a disruption of such a reductionist picture of chronic life, introducing what she calls queer chronicity. Chronic bodies, Freeman argues, are queer subjects in that they resist a “building towards wholeness.” They are difficult to represent. They are liminal. And perhaps, each daily routine of pain and ritual felt by a chronic body is distinct and strange every time it occurs.

Without making a more thorough account of Freeman’s talk – an account which should consider the implications of the usage of ‘queer’ to describe a disability, or trouble the ways in which academic analyses of disability often marginalize or exclude people with disabilities – I want to underscore here her notion of queer chronicity. Freeman notes that this thought-experiment is not meant to gloss over the endlessly painful and frustrating experiences of people with chronic illnesses. Rather, this idea is a suggestion for disruption. It involves subjects who appear to be basic and repetitious in action, but in actuality are constantly changing, creating meaning in the small spaces of morning ritual, brain fog, and peculiar time zones. Chronic life, then, is not just about the reoccurrence of identical experiences and rituals over and over again, but a flexible space that often refuses to offer obvious significance. Because of my partiality for a certain type of jargon and my own experiences as a queer, chronically ill individual, I felt something like a paradigm shift after attending Freeman’s talk. My illness, in all of its altered time, intoxicating fatigue, and stretched-out feelings of numb confusion certainly does involve mundane repetition. But such a chronic life, as Freeman argues, can also be read as something exceptional, strange, and reimaginative. Within sick struggles are spaces for strange pleasure and cautious celebration of a queer, chronic body. Such a body refuses emphasis on production, embracing instead perverse repetitions and bizarre reorientations with worlds.

These repetitions, or better said, the iterations of a chronic self, are not just habitual or bodily. They are rhetorical, they are verbal. I could count how many times a day, a week, I re-utter phrases like: “Yes, I’m still sick. No, I didn’t catch anything, I just have the same thing I’ve had for a while now” or “My head hurts. My back hurts. My body hurts. I’m tired” or “Yes, I’m still sick. No, same old thing.”

A description of Murphy’s film, as it appears on Youtube, says: “Shit People say to Sick and Disabled Queers and Shit Sick and Disabled Queers Say–to other people, to each other, to themselves…and repeat!” I read that last exclamation – “…and repeat!” as a crucial aspect of chronic communication. I constantly explain myself, my disabilities, my inconsistencies to those around me. And my friends and loved ones constantly (and so patiently) witness the subtle shifts, the strange confusions, as well as the continually, painfully repeating aspects of my illness. Representations of myself, then, just like my body, are art forms of iteration. In a twisted and ironic fashion, the constant reiterations of my illness, all of the words said and thought over and over again….right now, writing this piece – re-inscribing my own understandings of self and sickness… right now, the energy it takes to repeat the words that I know so well onto a computer screen in written form, also contribute to my illness.

Chronic illness can make it exhausting to make any film, to write any reflective piece. If sick folks are going to make something about being sick, then perhaps it is only appropriate that the very process of making that something – of producing a film about chronic

illness – is inscribed in the final product itself. My sickness needs its own representational genre. This genre incorporates the bodily realities of sickness into the very workings of artistic production. Explaining illness makes one sicker, so the art of depicting chronicity is ill, by nature. Literally. Content and process, discussions of sickness and the making of sick bodies, become entangled and wound into each other. Moreover, within such art, there is a repeated reflection on one’s own inability to “function,” to easily encapsulate sickness, to make decipherable messages. Murphy’s film might suggest a form of ‘sick work’. (Although, since normative conceptions of productivity consistently oppress disabled bodies – maybe ‘work’ can be invoked only with the most serious irony.) With sick work, corporeal realities of illness translate strangely, awkwardly, darkly, into an erroneous world of cinema that requires repeated questions, multiple takes, and fragmented episodes.

Can this work take place in other mediums? What happens when a text becomes chronically ill? When it needs to nurse a heating pad and take a Sudafed before it has the wherewithal to articulate?

Although I’ve fashioned this reflection in a manner that some may find legible, it is not a fair representation of my sickness. Writing these paragraphs has taken constant doses of medicine, fevered breaks, a few existential timeouts, and a complete neglect of my other responsibilities. When I tried in true form to write – in my realest moments of sickness – all that emerged were endless ellipses and countless semi-coherent revelations.

Thoughts about thoughts. Interrupted by the desire to vomit.

Interrupted by fevers, by aches.

I would like to see texts that are tired. Texts that pause between every other sentence to lay in the fetal position for a while. These texts don’t need to be productive. They don’t need to conclude. By involving a repeating and confusing constant translation of sick bodes, queer bodies, and by remaking these sick bodies, queer bodies, the text makes its own politics, its own refusals. It disables representation. It fucks with time. It rambles off, vaguely impassioned with hints of conclusion, semi-sensible, semi-argumentative, aching and tired and confused and not about to finish and when you wait for the final thought it can’t really find it for you, and it goes back to bed. 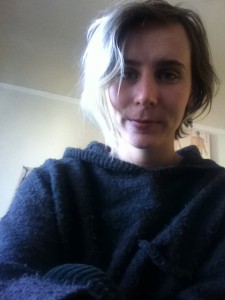 Alli Yates is an Interdisciplinary Studies undergraduate at the University of California, Berkeley, where she focuses on critical studies of food and the body as well as queer disability studies. She recently received a grant from the UCB Center for Race and Gender with a project entitled ‘Probiotics and the Re-culturing of Colonial Hygiene in the United States.’ Alli likes learning about plants, making sounds, and thinking a lot about guts.

Related ItemsChronic IllnessdisabilityElizabeth FreemanfilmIllness
← Previous Story On Disability and Cartographies of Difference
Next Story → Degeneracy Now! Suspended Between the Violence of Time and the Timelessness of Violence