Disposable Children: Whiteness, Heterosexism and the Murder of Lawrence King – The Feminist Wire

Disposable Children: Whiteness, Heterosexism and the Murder of Lawrence King 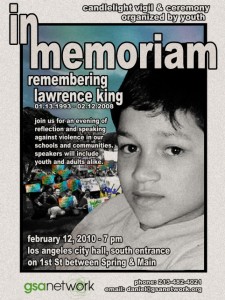 It isn’t until the end of director Marta Cunningham’s new HBO documentary film Valentine Road, the gut-wrenching chronicle of the 2008 classroom murder of 15 year-old Lawrence King, a homeless gay youth of color, that the viewer learns the significance of the film’s name.  Valentine Road is the location of King’s Oxnard, California grave, the final resting place of a caring, intelligent child whose death became a lightning rod for a racist homophobic heterosexist nation ill-equipped to see much less affirm King’s personhood.  Place is a central character in this film, which dubiously frames King and white working class “boy next door” murderer Brandon McInerney as bookends in an American tragedy set in multicultural Oxnard.  The film opens with a collage of the moments leading up to King’s execution in a classroom at E.O. Green Middle School.  We are treated to the sterile interior of the school, the gray tyranny of the computer lab where King was shot at point blank range, the blood-soaked floor that cradled King’s head after the slaying.  Throughout the film King is represented in still photos, in the blurred fleeting footage of a campus security camera, in whimsical stylized animation that attempts to capture King’s transition from Larry to Letisha/Latonya (which friends say was her preferred identity before her death).  The recollections of schoolmates, teachers, social workers and a foster parent touch on her fragility and kind-heartedness, yet in many of these testimonies her emerging identity is reduced to the “ungainly” performance of “cross-dressing”, crudely applied makeup, and awkward high heel boots.  It is clear that King’s “inappropriate” gender expression was construed by the school as an embarrassment, a behavior problem that school administrators sought to contain with vapid compliance memos which downplayed the culture of structural violence against LGBTQ youth.

While King’s narrative plays out in fragments, the narrative of 14 year-old McInerney is vividly nuanced. The product of a violent home, McInerney’s drug-addicted mother and homicidal gun-toting father appear as deeply flawed yet loving.  When he is cross-examined after the murder by a police detective he is treated with dignity, respect, and sensitivity.  When his case is taken up by two “juvenile justice” advocate attorneys enraged that he may be tried as an adult, the female half of the duo expresses her devotion and undying love for his so-called beautiful spirit.

In this regard Valentine Road ably, perhaps inadvertently, captures how the criminalization of people of color shapes American presumptions of white innocence.  Despite McInerney’s apparent fondness for Nazi paraphernalia and use of racial slurs to refer to black classmates, prosecutors dropped a hate crime charge against him.  His defense team trotted out the repugnant “gay panic” defense (which was prohibited for use in criminal trials under a 2006 California law named after Gwen Araujo, a transgender teen who was brutally murdered in 2002) egregiously portraying McInerney as a victim of King’s unrelenting sexual harassment. Unable to reach a unanimous verdict, the jury in McInerney’s first trial deadlocked.  Some of the jurors voted for voluntary manslaughter and others for first-degree or second-degree murder.  After the mistrial we see telling footage of white female jurors expressing sympathy for McInerney over pastries in a spacious suburban kitchen.  In their minds King was clearly the aggressor; the dark sexual predator whose moral deviance sent the troubled young white boy into a (justifiably) murderous tailspin.  Indeed, at least one of the jurors mailed prosecutors Religious Right propaganda excoriating the “abomination” of King’s sexuality and the injustice of “poor Brandon’s” plight. And in a show of motherly solidarity, the white female jurors even display “justice for Brandon” slogans.

In order for white hetero-normativity and heterosexism to flourish, violent masculinity must be fiercely protected by white women. This was made more than apparent during the trial of George Zimmerman, whose acquittal was driven by white women’s empathy.  The recurring theme of straight white innocence is one of the film’s most powerful subtexts.  At every turn McInerney is humanized and contextualized; redemptively positioned as a son, boyfriend, brother, lost boy, conflicted student and victim of abject circumstances that were beyond his control.  As per the national narratives of so many young white high profile murderers—from the Columbine shooters to Newtown killer Adam Lanza—we are carefully guided through McInerney’s world and made to “understand” his emotional turmoil and “damaged” psyche. While McInerney’s family members testify to his horrible upbringing Cunningham does not include interviews (save for one that was conducted with a short term foster parent) from King’s family members, guardians or adoptive parents, Gregory and Dawn King.  The film never attempts to place King’s homelessness, her foster care status, biracial cultural background and history of sexual abuse in the broader context of systemic disenfranchisement of queer and trans youth of color. We learn from a classmate’s passing reference that King was “part-black” and that she strongly identified with and perhaps saw herself as an African American girl.  Yet the implications of her biracial ancestry are never seriously explored with respect to the jury’s biases.

Aside from Dawn Boldrin, the instructor (who was subsequently terminated) who attempted to counsel and mentor King through her transition, many of the adults at the school policed and pathologized her behavior.  Throughout the film, King’s queer and trans Latino classmates comment on the impact of her murder and how it influenced their own courageous struggles for empowerment.  In one of the film’s most glaring oversights, it is unclear what, if anything, the school and district did in the aftermath of King’s murder to address the culture of institutionalized racism, homophobia and transphobia that contributed to her death.

After the outrage of the mistrial, McInerney eventually received a 21 year sentence for murdering King.  He will be released at the age of 39. One of the final scenes shows him rejoicing in juvenile detention with his family after receiving his high school diploma—a beneficiary of the criminal justice system’s devaluation of black queer and transgender lives.  Despite the advocacy of Larry King’s friends there is still no monument to or recognition of King at E.O. Green Middle School.

Sikivu Hutchinson is the author of the newly released Godless Americana: Race and Religious Rebels and Moral Combat: Black Atheists, Gender Politics, and the Values Wars.

Related Items
← Previous Story The Government Shutdown, Rape and Other Extortions of Assets
Next Story → Sound Off: Black Women Writers Respond to Rihanna’s “Pour it Up”