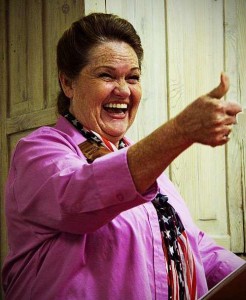 Arizona has more than its fair share of wing-nut politicians. But Brenda Barton, a Republican legislator from Payson, takes the cake.

On her Facebook page earlier this week, she referred to President Obama as “De Fuhrer,” generating a wave of well-deserved criticism, including from Jewish leaders understandably upset about Barton’s reference to the extermination of millions of people as “other stuff” that Hitler did. Democrats were also quick to criticize, with Arizona House Minority Leader Chad Campbell calling Barton’s comments “disgusting.”

Here at TFW, we’ve suffered whiplash trying to follow Barton’s oscillating claims that by “de fuhrer” she didn’t actually mean Hitler. But then she did, and then she didn’t again. What she really meant to say was that President Obama is like that other guy, Pol Pot, who also did some stuff. In Barton’s words, “We have a lot of examples of how a federalized nationalized government begins to take a grip on their citizens.”

Brenda Barton seems more than a little unclear on 1) history; 2) which party has “a grip on their citizens”; and 3) differences between federalism, fascism, democracy, and nationalism. Alas, while it would be comforting to view her as an isolated example of an out-of-touch rural white politician in a state that has become a poster child for backward politics, her views are all too common among conservative Republicans who hate President Obama.

Here in the “post-racial” United States, the haters can’t call the President what they’d really like to call him. So they  settle on the next best thing: Adolf Hitler. Remind us again who the jackbooted thugs are?