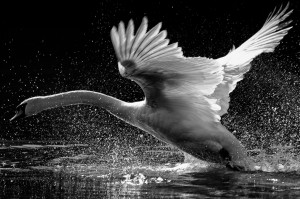 As you pack, you tell me

during your dawn river swim.

a hiss of chase. You say swans

protect their space. I say

What do these swans know?

the shoddiness of a god,

disguised as a bird

who mates for life.

To Have and Have Not

Here’s looking at you, kid.

You know how to whistle, don’t you?

Just put your lips together and blow.

We know a woman said that,

At least in the movies. The camera

Was there. But she didn’t write

The lines; they were scripted for her.

See the rakish angle of his fedora.

How his cigarette dangles.

And thinks he’s saying something.

.    not flesh, presumes to sky and abandons

That she knew herself divine, forgotten.

.   As though a flow of water could wash

Meredith Trede’s full-length book of poems, Field Theory, was published by Stephen F. Austin State University Press in 2011. A founder of Toadlily Press, her chapbook, Out of the Book, was in Desire Path, the inaugural volume of The Quartet Series and she serves on the Advisory Board of Slapering Hol Press. Journals that have published my work include Barrow Street, Gargoyle, 13th Moon, and The Paris Review. She has held residency fellowships at Blue Mountain Center, Ragdale, Saltonstall, the Virginia Center for the Creative Arts in Virginia and France, and was awarded the 2012 Nicholson Political Poetry Award.