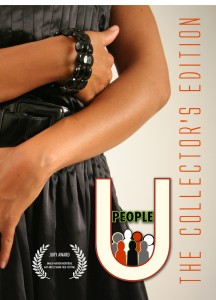 Nominated for a GLAAD Media Award for Outstanding Documentary in 2010, U People [2008] is a music video, a documentary LGBT film, and a digital archive of stories that document myriad experiences of otherness and queer-of-color life. The first ‘rockumentary’ of its kind, U People brings viewers behind the scenes of a not-so-typical music video shoot for out black lesbian artist Hanifah Walidah’s hip-hop single “Make A Move,” which debuted on LOGO in 2007. Directed by Walidah and Olive Demetrius, the film was made from the 20 hours of downtime footage of an unprecedented cast and crew of thirty queer women, straight women and transpeople of color between the ages of 25 and 35, living in New York City. What the camera caught introduces the hilarious, heartbreaking, candid and very human voices of young queer women and transpeople of color into discussions of gender, race and difference.

Regularly aired on LOGO network since its debut, U People became the first LGBT film to be screened at the National Civil Rights Museum in Memphis, TN in 2009, and went on to win several international awards and accolades, including the Jury Award for Best Documentary in the 2008 Image Nation Film Festival, the Audience Choice Award in the 2009 Paris De Les Femenists Film Festival in Paris, and a Most Outstanding Documentary nomination in the 2010 GLAAD Media Awards.

On the fifth anniversary of the project’s release, TFW Editorial Collective Member C. Riley Snorton had the opportunity to interview Walidah about the creative process, U People’s legacies, and the place of film and social media in contemporary queer-of-color communities.

CRS: Tell me about the conceptualization of U People. What was your role and who else was involved?

HW: U People was an incidental documentary. We didn’t get together those two days to make a documentary. We gathered to make a music video. But as the cameras rolled during breaks and downtime, we ended up capturing incredible, nuanced conversations on sexuality, race, spirituality and politics within the LGBTQ people of color community. So we kept filming. It was a serendipitous undertaking from day one. We had reached out to the community and our circle of contacts Myspace (this was just before the complete Facebook takeover) and that was how we brought the cast and crew for the video shoot together. So the cast and crew were in many ways a reflection of us—LGBTQ folks of color. There were also a few straight women and gay men who helped with the process, and who weren’t afraid to engage, and ask questions as they came up during the shoot. In the end, everyone who entered those brownstone doors was committed to getting into these conversations, even though we hadn’t planned them. There was something in the air and we all wanted to inhale.

CRS: It strikes me that U People is one of the earliest iterations of a now more commonplace practice, in which LGBTQ people of color make use of social media to create art. I’m thinking of The Peculiar Kind, Hart, and others.

HW: Definitely. As soon as the film was in the can I understood the power of social media to help bring our voices to the foreground. At the time Facebook wasn’t poppin’ like it is now, and Twitter hadn’t descended on the masses. The social media venue we used was our website, where we published a web series called “U People Stories,” where people shared their own experiences of otherness as queer people of color. We also had a weekly live video feed show hosted by my co-director and I called “Live with U People.” The film and the series became a kind of social anchor for many queer and trans folks of color—as well as for allies–looking for their reflection online.

When LOGO picked up the film, the emails came pouring in. We heard from hundreds of people within the queer community who used the film to come out to their parents. But we also heard from parents used the film to better understand their child, from educators who wanted to use the film in their classes, and so on. I’m grateful to LOGO, because they were very receptive to the film and allowed it to be seen by so many that we might not have reached on our won. But I think next to the film, the “U People Stories” webseries truly articulated and expanded on our main concept: everyone is a “U People” to someone. Everyone experiences ‘otherness’ in some way, and we wanted to showcase how those experiences look and feel in queer communities of color.

CRS: That’s a striking confirmation of the message of the film, which I read as one of understanding. Folks trying to understand across so many differences.

HW: Exactly. Across sexuality, ethnicity, race, gender, body-type, abilities, class… you name it. I think that was “the thing” that was in the air. The people in that brownstone felt absolutely safe to ask questions and affirm answers. There was no defensiveness or resentment, just this uncanny saturation of love. There was an incredible respect and appreciation for the project we all were working hard on, and that superseded any and everything that was less than love. It created an environment where Black, Latina, and Asian-American lesbians, transmen, bisexual and straight women could go for broke, use all of their body language, shed and wipe each other’s tears, call each other out, become fearless in probing, yet maintaining a respect for each other’s perspective. I had never experienced anything like it.

WATCH: U People Excerpt: “The Box”

HW: Sure. Me and my co-director (who was my girlfriend at that time) were walking down St. Marks St. in Brooklyn and a “brother” cut us off with his pedal bike. He thought that we should apologize to him for running into his bike. My initial reaction was “fool, you must be out of your mind. Bike trumps feet papi? For real?” He taunted us for 3 blocks on that bike. Then he got off and faked a jab at me. I do not propose to be hard in any sense of the word, so I flinched. He smiled and kept taunting us. It wasn’t until we threatened to walk back a couple of blocks to where some police were stationed that he left us alone. I couldn’t talk for the remainder of the day; my jaw was tight. I wasn’t able to speak literally until I sat down and wrote a song about it. But you know, it wasn’t so much the feeling of being trapped and assaulted that hurt the most. What hurt the most was that there were plenty of witnesses that did absolutely nothing. As if two black lesbians or even two black women weren’t worth the effort it would take to speak up, stick up, help. We were better suited for entertainment. We were the other. And that is what U People stories were about. That is what the film challenged head on.

CRS: Thank you for sharing that story. Changing gears, I’d like to ask you a question about music and musicianship. Tell me a little bit about the sound and the music, as it pertains to U People’s various components.

HW: The mother of U People is music. It was born out of wanting to bring my music and my reflection, simultaneously to a wider audience. I knew there wasn’t any music video that showed “us” as we know us to be. I am not one to complain about what doesn’t exist but rather build it or birth it into creation. Creating art is much like being pregnant, at least emotionally. The film also welcomed other amazing musicians within the community and within the larger community of women like Toshi Reagon (NYC), Shelley Nicole’s Blakbushe (NYC), Red Summer (ATL)  Kandy Cole (LA) and many others on the soundtrack. Music is the cornerstone of what I do. Every creative process has a soundtrack.

CRS: What were some of the reactions you received while touring with U People?

HW: Actually one of the surprising perspectives I’ve heard while touring the film were the opinions from gay men audience members of the lesbians and queer women in the film. One gay brother was like, ” wow you guys are just like us.” I took it as a nod to our mutual humanity and left it at that. I still wonder why no one has tackled the disparity between the two groups, at least on film. It’s a project I have in mind.

Over the past five years, we’ve shown the film at dozens of campuses, libraries, museums, theatres, etc. I’m especially inspired by the dialogues it opens up on college campuses where black LGBT students feel like a shameful minority. It also prompts great discussions at larger universities where professors have screened the film in front of their mostly straight black student body. For me, a real highlight was when it became the first LGBT film to be screened at the National Civil Rights Museum in Memphis in 2009. People had screamed bloody murder online when that screening was announced, but to our surprise, there were no picket signs when we arrived. The museum really supported the film, and the town hall meeting that followed.

CRS: Wow. Do you still get requests for screenings? How can people see the film now?

HW: Absolutely. In addition to college and university screenings, the film just recently became available to view online at Busk Films.  But there are still so many places it hasn’t screened where it could make an impact. The beauty of filmmaking is bringing the vision to fruition, but then there are the logistics of marketing, acquiring momentum, press and the business, and that’s where too many queer, women’s, and feminist projects need more support. The play on Logo was fantastic, as were the festival awards, and the GLAAD nomination, but in some ways the film didn’t get as much attention from the LGBT press at the time.

Like you said, it is a timeless film, and I’m glad to see it living beyond the moment in which it was created. As long as young queer folks of color are being hurt, killed, ignored, isolated and simply misunderstood, I’m glad the movie is out there. I feel honored to have been a part of its making. Folks can watch it online, or it can easily be licensed to universities and festivals at www.iloveupeople.info. 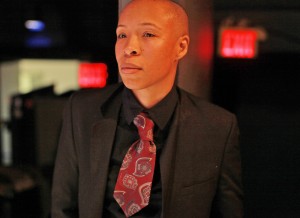 Hanifah Walidah is a musician, playwright, educator and social arts activist. She currently is touring internationally as lead singer-songwriter for electro-soul band St.Lô (www.facebook.com/wearestlo). Her rich, twenty-year career has taken an ethnographic approach to the arts to create culturally relevant film, music, and stage works that help foster social change. Recent projects include the feature length award winning rocumentary U People and the nationally noted Black Folks’ Guide to Black Folks, a one-woman show and feature-length film imagining and stimulating conversations among queer and straight communities of color in the contemporary U.S. She is a founding member of the well-known New York City women of color theatre cabaret, Rivers of Honey which is celebrating its 15th year in production.

Related ItemsAcademiaActivismarts and cultureBlack WomenfeminismfilmLGBT politicslgbtqiLGBTQI People of ColorMasculinityMusicWomen of color
← Previous Story if God can Cook / you Know I can: Pedagogy of Those Opting-Out of Oppression
Next Story → #BlackPowerIsForBlackMen: Letters from Brothers Writing to Live