Race and The Invisible Cloak of “Black” – The Feminist Wire

Home / Black Women / Race and The Invisible Cloak of “Black”

Race and The Invisible Cloak of “Black”

Two years into living in the U.S. a carload of Anglo American boys tried to run my two younger sisters and me over in an empty parking lot, yelling epithets, revving up their engine and doing donuts. Among the words, “Nigger” stood out. Not “monkey” not “jungle” but “Nigger.” It was 1997. When the full reality of what they said sunk in, I was infuriated even more. How dare they? Couldn’t they see that we weren’t like them? My sisters, oblivious to race relations, couldn’t understand my anger. I gave up trying to explain myself.

My mother had moved us to the U.S. to live with her in the home of the African American family that adopted her when she first sought asylum from an abusive relationship. We lived as a blended family. My perception of my African American siblings was culled from media and spiced with the limited interactions I had with those who lived over the border between our “American Dream” cookie-cutter community and the dilapidated housing projects just behind our white picket fence. The surfaces of our individual bubbles kissed in the McDonald’s located at the corner of Livingston and James, and at the local branch of the public library, just across from the 7-Eleven on Barnett.

So was I a Nigger based upon observation and what the media fed me?

Hell No! I still blush when I think back to this particular day in my herstory. I sold out my siblings that day. I had no idea what America had in store for this visibly dark brown-skinned immigrant woman. Mostly surrounded with Anglo Americans and the few international students who comported themselves in a way that was as far away from any stereotypes as possible, I was seen as an “Oreo” for most of my college years. I could “talk proper” and “articulate so well.” And by year three I got compliments for having no accent: “no one would be able to tell you weren’t from here!” I was ecstatic. I even let them touch my hair. After all, they were “just curious.” And I relished in the fact that I “wasn’t like them” because being the kind of Black I was made me acceptable. I was the “safe” African/Black woman.

Yet I was complicit in mainstream America’s Operation Demonize African Americans, and it was only years later that I would vehemently refuse this access to the “safe Negro” society. In retrospect I stepped off that plane a Ghanaian, confident in my ancestry and history, and was quickly handed the cloak of “Black.” This is by no means to say that I wasn’t aware that I was Black before. I was. I am the darkest of all my siblings and cousins so I knew that I was Black.  However, I was also acquainted with the deep shame of having a darker shade of skin (a story for another day). This cloak was initially invisible to me but became evident quickly, even though I refused to accept its properties.

I knew where my people were from.

I wasn’t sold into slavery.

My father wasn’t in jail.

I wasn’t the child of a teenage mother.

I wasn’t a high school drop-out.

This was Black. I wasn’t Black. Unbeknownst to me this cloak that America gave to me carried with it totalizing and reductive traits that became defining characteristics–with social implications. Once I was denied a Big Mac meal in a little village in Pennsylvania because of my skin color (my white teammate went in right after me and purchased the said item for me). At another time in Texas I was given a $325 ticket for cutting through a gas station with my lights accidentally off (the two police officers who originally pulled me over called for back-up; they claimed they thought I had drugs and searched my trunk).  When in college my grade was once lowered because “I couldn’t possibly have written that paper!”

So even as I was being congratulated by my white peers for “having no accent,” America was busy at work socializing me, making sure that I knew what the rules of the game were: In America, you are Black, get it?! If you don’t conform, don’t worry, we have lots of ways to ensure that you do. In the end, no one will need to tell you that you are Black. You will just know your place and learn to navigate it in order to avoid harassment, humiliation, imprisonment, and death.

It took me Years to fully claim/own this cloak. As the years rolled by, I minored in African American Studies and got involved with Black Student Union and other student organizations at my schools. My awareness of what label I wore (“talking proper” and ethnicity be damned!) became clearer. I began the slow undoing of the divide-and-conquer assault that had been waged on my psyche for twenty-five years by reading, attending workshops and making real African American friends. And when I saw my African American siblings and others defying statistics, I finally understood the weight of this invisible cloak.

Fast forward to last week, I gave an interview to a sociology PhD student wanting to interrogate the label of “Black” and if/how African immigrants come to own it. A few days later, another PhD student also asked me to articulate the same question after she watched the interview Chimamanda Ngozi Adichie gave about her latest book, Americanah. I have never been interrogated about articulating why I wear the label “Black,” at least not in the way they were asking me to do it. How did I define it? How did I come to claim “Black” for myself as opposed to “African”? When did I first claim it? How did I embody it?

So here’s what I told them:

In identifying myself in the beginning stages of race-consciousness (i.e. pre “oreo” stages) I chose “African,” feeling more drawn to the identity of nationality, never mind that there was no singular African identity. Further along in my stay in America, I discovered the term “Diaspora” and learned that there was an identity in that as well. I became “Black” and/or a “Person of Color” over the last seven years, since serving on an Anti-Racism team, being trained by CrossRoads, and better grasping the struggle and owning it. Still, sometimes I find myself caught in between Africa and the Black Diaspora, each operating with its own set of stereotypes about the other. Yet all are covered in the same cloak.

I consciously became Black when I was refused access to the system I thought would work for me because I was “African”–and not Black like them. When I was refused service in the boonies of Pennsylvania or the “A” I earned in class, I realized that my African American siblings were not just “angry, needing to pull themselves up by their bootstraps, or lazy.” And what they were telling me about in terms of their racial experiences were not conspiracy theories. It was real. My experiences were real.

I became Black because it was attached to me and there was no escaping it. I couldn’t be fully a hyphenated American because none of the existing labels fit me. I knew I could not claim the label African American in the context of the U.S. because my narrative was not that of the people who articulated it. The slavery that I know is from history books, and from sitting at the feet of my African American foremothers. It is not encrypted onto my flesh or in my DNA. At least not in the way I presume it to be for my African American brothers and sisters.

Black is my cloak of choice in spite of/because of what dominant America says–but also because of what I say. I see it as a unifier, a way to blur the edges of our so-called individual and separate cultures. Black is my identity to claim the struggle that Audre Lorde always talked about. It’s my way of saying that our “original” ancestors (if you will) would most likely have all of the continent and the Black Diaspora join together to undo the separation that has long-marked our very existence. Under this label, I dare to think that we can accomplish so much more. Of course I am not foolish enough not to realize that this is rather utopian and idealistic of me. Still I claim the cloak of Blackness knowing its properties both lived and imposed. I claim the cloak of Blackness wishing more of my African siblings would claim it as well. 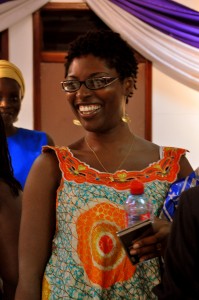 Kuukua Dzigbordi Yomekpe is a trans-disciplinary artist: choreographing West African dance forms, creating western versions of Ghanaian meals, and penning  memoirs, essays, and social commentaries. Her scholarly and writing interests lie at the intersection of race and skin color, immigration and the African culture, Black women’s bodies, and queering sexual expression. All her work is influenced by her education and socialization in womanist, feminist, postcolonial, and Africanist theories.
.
Her essays have been anthologized in: African Women Writing Resistance (UW Press), Becoming Bi: Bisexual Voices from Around the World (BRC), and Inside Your Ear (Oakland Public Library Press). Her essay, “The Audacity to Remain Single: Single Black Women in the Black Church,” won the Marcella Althaus-Reid Award for best “Queer Essay,” and is anthologized in Queer Religion II (Praeger Publishers). She has twice participated in the Voices of Our Nation residency at UC Berkeley. When in her nativeland, Ghana, she often reads on the weekly radio program, Writer’s Project on Citi FM and Ghana Voices Series.
.
She blogs at: http://ewurabasempe.wordpress.com/ and http://www.spoonwiz.com/feed-people-heal-schisms/

Related ItemsAfricaBlackBlack WomenBlacknessEthnicityidentityImmigrationRaceRacializationracismWomen of color
← Previous Story COLLEGE FEMINISMS: A Critical Analysis of Orange Is The New Black: The Appropriation Of Women Of Color
Next Story → Miley’s Big Foam Finger Is Pointing At You: Stereotypes Plus Objectification Equals $$$