The Aisle of Ethnicity – The Feminist Wire

Home / Ethnicity / The Aisle of Ethnicity

The Aisle of Ethnicity

I am shopping with my mother at Giant; the top of my braided head barely meets the counter of the register while my mother’s head soars high above my sights. We walk past the register, and begin to shop.

As we pass the different aisles, I take a quick whiff of each one, trying to determine which aisle holds what; but my mother walks quickly, and I cannot keep up. We don’t have time to dawdle, my mother says, and so I breathe deeply, trying to savor each smell with the passion of somebody who has time to burn. I take in each scent with the torpor of a sloth.

Lavender is wafted into my nostrils as we past the Detergents. A sweet, doughy scent makes its way to my nose as we pass the Bakery. Pungent carcasses barricade their odor into the air, and the biting scent lingers on my clothes even after we pass the Meats. And then, after ages of treading along, my mother stops abruptly at the end of the aisle. She sighs, and walks slowly, taking in the smorgasbord of aromas that are lilting into the air.

I look around, and the warm air settles on my shoulders, wrapping me almost in a hug. The scents bombard me mercilessly, and the diversity of the smells is matched only by their evanescence. An acrid spice suddenly transcends into a nauseatingly cloying aroma. I don’t have time to process how an opaque and grainy scent shifts into a shallow, syrupy smell that traipses into the air. Each unique scent permeates through my very core, leaving me speechless.

I am sharply pulled out, by an dark, unseen force; it is my mother, telling me that we must go, that she has been looking for me, and no I cannot have that Hershey’s bar because I haven’t eaten lunch but maybe I can get the chewing gum if I share it with my siblings. I ask my mother what that aisle was, and I point aimlessly at the harem of aromas I’d been meandering in, the same one we are walking away from. It is the Ethnic aisle, she says, leaving me with a wondrous feeling at how I could’ve lived so long not knowing of that special aisle.

It is years later, and we are shopping at the same Giant, only it’s taken my mother and I much longer to drive there. I am taller than my own mother, and as we enter the store I ask if I can drive us back. My mother responds with a curt “tsk” as she drops the car keys in her abyss of a purse. I do not expect to drive home.

Thank God the trip to the Ethnic aisle is a quick one, now that the store layout has been re-arranged, my mother says. For the third time this month, she mutters with what she believes to be an inconspicuous tone.

The Ethnic aisle welcomes us with open arms and a soft hug of heartily warm air, which is well-received in this wintry month of December. The Ethnic aisle is appealing in that I don’t have to search for or explain my culture, a part of who I am; it’s already there, assuring me that I’m nothing but normal and among friends. I turn and look around at the Ethnic aisle, and as I lazily gaze, I hear my mother’s “tsk.” If this trip is like any other, my mother will “tsk” several times and we will be on our way with our desired item.

I search and see all of the different sections of the Ethnic aisle. Asian, South Asian, East Asian, African, Italian, Middle Eastern, Latin, South American, the list doesn’t end for miles. It’s as if every possible ethnicity on the planet were brought to this section of this simple suburban supermarket for a potluck…except for one.

I critique my favorite section of the Ethnic aisle—African—and I look for products to beg my mother for. Spices that I hold near and dear are mispronounced and misused with such ignorance that I cringe in pain. At least my own section has English phonetic transliterations in addition to the translations; I can only imagine the trouble entailed to those without.

The idea of somebody misunderstanding a part of who you are is hurtful, but for somebody to simply ignore your identity is a hell I wouldn’t wish on my worst enemy. Culturally, it’s the easiest thing in the world to do; simply take something you don’t care to understand, and trivialize its significance with misuse. Using a foreign spice for a simple recipe is one thing, but wearing religious and/or cultural attire for fashion purposes is something else entirely; one is culturally appropriative, another is bad cooking skills. I thought on it further, and shuddered to think that many have appropriated other cultures and violently embedded chosen aspects into their own throughout history, with America being one of the most ignorant offenders.

But as I ponder this further, I come to see the despicable fantasy within the Ethnic aisle. I know for a fact that the creation of each section was not consulted by the respective ethnicity/race—that my mother and I had no say in what got put in the African section—and that the only identity unavailable in the Ethnic section was White. The fact that White was not a section within the Ethnic aisle exposed to me a dark truth in America: that White was the default, and that everything else was an “Ethnicity” to be abused. The Ethnic aisle was the White perception of “Ethnicity,” and though the products were convenient, I had a change of heart when I realized that my culture, identity, and history were reduced to a small section in a supermarket.

The Ethnic aisle, once a second-home and now a sham, was in the rear-view mirror with the rest of the supermarket as my mother drove us away. I angrily chewed my gum, biting my tongue in the process. I had arrived as a person, with history and culture all my own, and left as a flavor to be well-tried and thrown away. 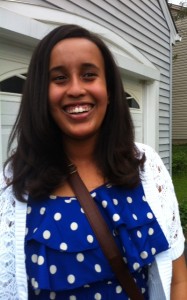 My name is Carima Nur when I’m in trouble and CC when I’m among friends. I enjoy tweeting, Nutella, social justice, dismantling the patriarchy, doing my nails, and other silly girl things. I can usually be found in my room or at the mall.

Related ItemsEthnicityFoodwhiteness
Next Story → Race and The Invisible Cloak of “Black”