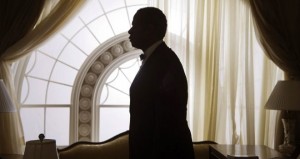 In a formative scene that occurs about midway through Lee Daniels’ The Butler, audiences are presented with imagery from two widely divergent events that are purportedly unfolding at the same time. The drama is delivered in flashing, back-and-forth takes that accentuate the contrast between these two seemingly opposing sequences. The first event is one of opulence and grandeur: elegantly dressed, middle-aged black domestic servants prepare a Champagne-filled dinner table for an extravagant gathering (of white diplomats) at The White House. Dissimilarly, the second event is one of terror and fright: a group of young, mostly-black, college-aged student radicals engage in nonviolent tactics as their bus comes under attack by the Klu Klux Klan.  The directorial choice to present these events side-by-side is clearly not simply for “dramatic effect,” rather, it is a way of exposing the central ideological and generational “riff” that forms the narrative core of Daniel’s film. According to the narrative logic of Lee Daniels’ The Butler, the men and women who quietly cleaned dishes at The White House (as butlers and maids) are just as important to our understanding of the civil rights movement, as the young visionaries who rode in “Freedom Buses” in the deep south.

From some, this argument will be a stretch. For others (including this critic), it is a provocative proposition (one that is powerfully—even if disjointedly— engaged in Daniels’ film). At its core, Lee Daniels’ The Butler is an attempt to alter the way that domestic workers have historically figured into the black cultural imagination. Rather than following in the classic Hollywood tradition of representing black domestic workers (particularly butlers, maids, and cooks) as clownish, one-dimensional caricatures whose sole purpose is to aid in the moral enlightenment of white people (see, for example, The Help) —Daniels presents us with Cecil Gaines:  a hardworking, family man whose subservient labor arguably constitutes a form of “quiet” protest. Based on the life of former White House Butler Eugene Allen, Gaines is depicted as neither an apolitical, happy-darky (in an early dinner-table scene, he objects to his wife’s claim that life for black folks in Washington, DC is “better” than in the south by reminding her that blacks are also “treated badly” in the north) nor is he portrayed as a larger-than-life hero. Instead, Gaines is figured as a multidimensional human being who is doing the best that he can to feed a family, maintain a job, and live with a modicum of dignity.

In another formative scene in The Butler, a minor character in the film prepares Gaines for his life as a butler by lecturing him on the necessity of maintaining “two faces”: the friendly, nonthreatening face that must be worn when entering the white man’s public sphere, as well as the more authentic, humane, and multidimensional face that must be worn at “home” in the presence of other black folks. Sophisticated viewers will immediately recognize this scene as one that resonates with W.E.B. DuBois’s classic articulation of “double consciousness,” first proposed in his 1901 magnum opus The Souls of Black Folk. Indeed, the trope of duality, or “two-ness,” is a central theme in much of Lee Daniels’ The Butler—particularly as the Gaines character wrestles with the realization that he is in The White House but certainly not of it. Similarly, one might argue that as a filmmaker Lee Daniels himself struggles with “two-selves.” On the one hand, his auteur style, quasi-experimental aesthetics, and ongoing engagement with the traumatizing dimensions of black social life (from rape and incest to racism and inequity) align him with a rich black independent film tradition that recalls the work of Leslie Harris and early Spike Lee. On the other hand, his ongoing collaborations with industry A-listers (from Nicole Kidman to Oprah Winfrey) and his penchant for melodramatic sentimentalism places him squarely in the big-studio, Hollywood tradition that has come to be synonymous with Tyler Perry. Ultimately however, Daniels is caught somewhere in-between worlds: he remains both inside and outside of the Hollywood machine at the same time.

The problem with Lee Daniels’ The Butler has less to do with the story and more to do with the storytelling. The film’s innovative storyline and superb acting performances are often compromised by specious directorial choices and clichéd screenwriting.  Daniel’s signature style (campy, kitschy, and sentimental) falls flat in critical moments. Most of the casting choices for the film’s Presidential figures are poorly conceived (particularly Alan Rickman’s Harry Potter-esq portrayal of Ronald Reagan); the film’s sentimental engagement with melodramatic background music compromises the authenticity of several key scenes; and the film’s costuming choices occasionally gesture towards the farcical (the image of Cecil and Gloria Gaines dressed in matching RunDMC-era vinyl tracksuits is treacherous). These directorial flaws are exacerbated by a script from screenwriter Danny Strong that often attempts to do far too much in too little time (in two hours, audiences receive a fly-by-night tour of 82 years’ worth of American history). As a result, Lee Daniels’ The Butler often has the look and feel of a made-for-TV movie (it should not be surprising that Danny Strong’s most successful screenplay to date is the 2012 Cable-TV movie “Game Change”). Any trained filmmaker will notice that Lee Daniels’ The Butler has been edited in a way that supports this aforementioned “made-for-TV” format: in several moments there are noticeable “blackout” pauses in-between scenes, each of which leaves audiences with the feeling that a 30-second commercial break is just around the corner. 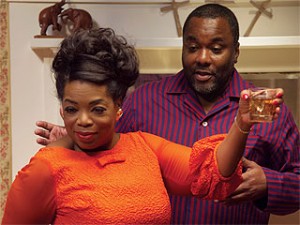 Nonetheless, in spite of these hefty directorial and screenwriting flaws, there is enough superb material here (both in terms of the ideological depth of the film’s father-son narrative as well as the uniformly excellent performances of Whitaker, Winfrey, Howard, Kravitz, Gooding, and Oyelowo) to ultimately make this film quite important. Lee Daniels’ The Butler soars most forcefully in the moments where the camera finally moves out of the White House and into the Gaines house. There in that house—in the moments where we get to witness a middle-aged black mother (Winfrey) asserting her agency through whiskey, Soul Train and the blues; a jive-talking, numbers-runnin’ street Casanova (Howard) scheming into his way into his neighbor’s pants; and a soft-spoken, strong-willed domestic worker (Whitaker) desperately trying to make sense of the strange new model of “freedom” his son (Oyelowo) espouses—audiences get a glimpse of cinematic magic.  Indeed, in the powerful scenes that take place inside of the Gaines residence, Daniels moves beyond caricatures and presents us with a gorgeous cinematic portrait of what poet Elizabeth Alexander refers to as the “black interior”: those intimate, joy-filled (and often-raunchy) counterpublic spaces where black folks can congregate, care-for, and cater-to one another without being subjected to the surveillance of a white gaze. It is in the vein, that the film ultimately succeeds. Also, to Daniels’ credit, this film breaks important representational ground with the character of Gloria Gaines: I can’t recall another mainstream film where I’ve seen a plus-sized, late middle-aged black woman represented as “sexy” (in a way that did not reify the tropes of “Jezebel” or “Sapphire”).

Overall, Lee Daniels’ The Butler is a moving, multidimensional, and sometimes magical film from an emergent filmmaker who is still wrestling with his inside/outside relationship to the Hollywood machine. 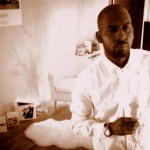 Frank Roberts is a Ford Foundation Fellow in the Department of Performance Studies at NYU, where he also teaches in the Gallatin School. He has previously taught in the English department at Hunter College of the City University of New York, the department of Africana Studies at the John Jay College of Criminal Justice, NYU’s College of Arts and Science, and the department of Film and Media Studies at The New School for Public Engagement, among others. He can be reached at frankrobertsonline.com.