A few years ago, an African American comedian joked about having to move in with his mother because he was down on his luck and had no one else to whom he could turn for help. Unable to find employment in—or out of—his field, he reluctantly accepted his mother’s offer of temporary housing until, according to him, “someone saw fit to hire a grown, fat guy whose only job is to make folks laugh and get paid for doing it.”

Unable to contribute financially to the household but grateful for his mother’s benevolence, he soon discovered, however, that the big move-in came with “conditions for remaining.” Chief among the requirements were standard missives, including “keeping the room clean,” “looking for work on a consistent basis,” and “contributing to the household in whatever manner you can.” When, however, several months had elapsed and few of the conditions had been met, the mother, in an effort to nudge her son toward independence, began a series of small “house fees,” including charging for drinking the filtered water, enjoying the central air, and parking in her designated spot. “But, Mama,” the man protested upon the newly-presented list of stipulations, “You gon’ charge me for that? I thought water, air and parking were naturally free.” “Yeah, well, you thought like Nelly,” the exasperated mother shot back. “It’s gon’ cost you a fee to be up in here. May as well be for my water, air and space.”

I offer the above scenario not to lament the circumstances of the man’s employment woes, but to buttress his claim that some things in life are thought to be “naturally free,” i.e., the public spaces where citizens walk any given day, in any given city, during any designated time of their choosing. In the case of 17-year-old Trayvon Martin, however, the space he walked, at the Twin Lakes Retreat in Sanford, Florida, on a drizzly February evening in 2012, came with not only a price but a fee he had no way of knowing he would be charged. While I will refrain from revisiting the events leading to Martin’s death, I feel compelled to address the elements of how his presence, in the space of his choosing, was somehow transformed into a personal debt that George Zimmerman believed he, Zimmerman, was owed, not only because he and Martin were of different races, but also because he believed himself to be, in the moment of his gaze upon the teenager, owner of the space where the teen walked.

There was a time, in the not-too-distant past, when social codes of conduct, especially in the South, dictated that people of color defer to people not of color, in public places. The most public of these spaces where such actions were expected were sidewalks, where African Americans were expected to step aside and put a measurable distance between themselves and white pedestrians who approached from the opposite direction. To behave otherwise raised the risk of verbal abuse and, in some instances, violence in the form of physical confrontation. In the public domain, certain people believed, in that not-too-distant past, that it was their absolute right and privilege to claim ownership of all things in their proximity and within their periphery.

While George Zimmerman, according to reports, had a legal permit to carry a firearm, the weapon he carried on the night he killed Martin augmented his self-confidence, allowing for an artificial gallantry and sense of assurance. His judgment of Martin, however, was a calculated bearing, postured by the teenager’s mere presence in the community. Zimmerman viewed himself—at the moment of his gaze upon Martin—as the gatekeeper, protector, and guardian of the space where Martin walked. It was a space without walls, borders, or boundaries, a space where Martin should have felt freedom from intimidation, fear, or threat, a site that should have allowed him a peaceful presence of mind as well as a path of safety. In Zimmerman’s determination, however, the space where Martin walked would be one which he, Zimmerman, controlled, managed, and asserted power over, a space which he—and he alone—determined would not be defiled, violated, or sullied by the presence of an “other.”

Trayvon Martin’s right of occupancy greatly conflicted with what Zimmerman deemed proper, fitting, and “appropriate.” In Zimmerman’s calculated reckoning, Martin lacked authority of attendance at the moment of his, Zimmerman’s, sighting. Martin’s greatest protection for contradicting his “otherness,” in Zimmerman’s perspective, would be an accounting of his “permission” to be in that esteemed space, where faces and bodies, in his perception, had value, merit, and worth. The gunman’s gaze of deliberation dictated, without cause, an instinctive need to operate on impulse and desire. Therefore, in the quiet surroundings of manicured lawns, carefully trimmed hedges, and debris-free sidewalks, he not only proclaimed Martin an interloper, he irrefutably declared him a threat.

In the essay “Black Men and Public Space” (1987), Brent Staples, an editorial writer for the New York Times, shares his feelings about being racially profiled on the streets of Chicago during his years as a graduate student at the University of Chicago:

In that first year, my first away from my hometown, I was to become thoroughly familiar with the language of fear. . . .I grew accustomed to but never comfortable with people who crossed to the other side of the street rather than pass me. Then there were the standard unpleasantries with police, doormen, bouncers, cab drivers, and others whose business it is to screen out troublesome individuals before [author’s emphasis] there is any nastiness.

What connects, a quarter century later, the experiences of Martin and Staples? What parallels the actions of the “police, doormen, bouncers, cab drivers . . . who screen[ed] out troublesome individuals. . .” with Zimmerman’s appropriation of Martin? The most palpable confirmation is that each was Walking While Black. Unlike Martin, however, Staples was a twenty-two year old man, whose experiences in his hometown of Chester, Pennsylvania, may have prepared him for the tribulations of big-city life. Perhaps his familiarity with the “language of fear” allowed for a more nuanced—and thus a more immediate—adaptation to pierced gazes from those who did not look like him.

As the oldest of nine children, perhaps he was charged with adult responsibilities in the guardianship of younger siblings. Conceivably, if this were the case, his sense of responsibility, coupled with wisdom and experience, would prepare him for an arena beyond the security and safety of the family dwelling. He understood, as he walked the streets of Chicago, that he not only had the ability to alter public spaces, he also had, by virtue of his color, the power to reinforce myths of the “menacing black man.” Where Staples, in his maturity, may have been perceptive to impending injuries, Martin held no shrewdness of imminent danger or hazardous circumstances. Nor, I surmise, should he have had. He had every expectation that he would arrive, in peace and without interruption, at his destination. Like the fretful white women who clutched their purses and exceeded their natural gait when passing Staples on the streets of Chicago, Zimmerman’s imagined peril activated an unyielding conviction.

In the immediacy of his most despotic act of inhumanity, however, Zimmerman also failed to display any level of consideration and empathy for Trayvon Martin as he lay motionless on the ground: He did not call for medical assistance; he did not attempt, however in vain his efforts may have been, to render aid to the dying teenager; he did not shield the boy’s body with clothing in an overt display of respect in view of the brutality of the action he had committed. What he didn’t do in the aftermath of his act, however, was less profound than what he said: “Call my wife and tell her I shot someone,” he directed a curious onlooker. In other words, “Call my wife and tell her I shot an other. Tell her I shot a figure that did not belong. Tell her I shot  someone who had no right to be in my personal space.”

To perform any act of decency in shielding Martin would have, in Zimmerman’s thinking, negated his theory that Martin, while walking, had a right to be in the space where he was. To display any level of consideration would suggest, in Zimmerman’s thinking, that Martin was not an “other,” an interloper, a fraud, or charlatan. To behave any way other than the way in which he behaved would indicate a level of consciousness and empathy, and Zimmerman would absolutely have none of that. In the rain of the night, Zimmerman became, because he proclaimed himself to be, the judge of Trayvon Martin’s right to inhabit the space of his choosing.

Zimmerman’s callous and cowardly behavior, on the night of his steely gaze upon Trayvon Martin, was calculated and abrupt. His unsubstantiated theory of deleterious “behavior” by Martin superseded any rational premise of the young man’s innocence. Unlike the mother of the unemployed comedian who, to his chagrin, had the absolute right to charge her son for utilizing the “natural elements” in her private home, George Zimmerman believed that he had the right to impose his own rules, regulations, and “conditions for being” in a space he neither owned nor operated. Not only were his actions heartless, injurious, and indefensibly reprehensible, they were also an affront to anyone who dares to walk in any public space, on any given day, during any time of their choosing, without fear, terror, and threat of bodily harm. 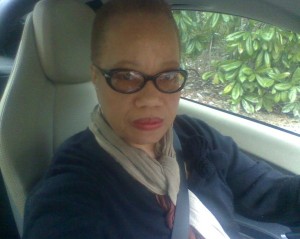 Lillie Anne Brown teaches in the Department of English and Modern Languages at Florida A&M University in Tallahassee, FL, where she also serves as Co-chair of the Grievance Committee of the College of Social Sciences, Arts and Humanities. Her work has appeared in numerous books and journals, including Revista Lingua & Literatura; Personal Souths: Interviews from the Southern Quarterly; The Journal of the Pennsylvania State Universities; Black and White Masculinity in the American South; Pakistaniaat; Children of the Changing South: Accounts of Growing Up During and After Integration;and The Encyclopedia of the Environment in American Literature. An essay, “Negotiating Racial Performances in the Capital City,” is forthcoming inFlorida. Her research interests center on images of the female body politic and the intersection  of race, power, gender and identity in southern literature. She has written and lectured extensively on the works of American author Ernest J. Gaines and is at work on a project in celebration of the 20th anniversary of the Pulitzer Prize-nominated novel A Lesson Before Dying. She has also laid the groundwork for Kaleidoscope: Essays on Kinship, Community and Cultural Traditions. A politically conscious member of the community in which she grew up, she writes a blog for the Innocence Project of Florida, a public policy organization that seeks to free wrongfully convicted men and women through DNA testing. Her essay, “Not the Belle of the Ball: Bernice, an Unconventional Girl About Town in Jennifer Lopez’s South Beach Tow,” appeared in The Feminist Wire in November 2012. She holds a PhD in 19th and 20th Century literature from Florida State University.