Black women have tended to incredible, secluded gardens within the expansive wasteland of this dysfunctional democracy.–Joy James, from “Resting in the Gardens, Battling in the Deserts: Black Women’s Activism” 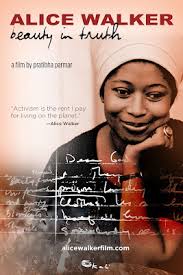 Celebrated British filmmaker and activist Pratibha Parmar opens her newest work, Alice Walker: Beauty in Truth, with stunning shots of landscapes. Alice Walker’s voice can be heard as scenes of nature—blades of grass, lavender-colored flowers, and trees captured against the color sunset—move unhurriedly across the screen. Walker’s reading of her poem “Remember” is laid over the images and functions as an invocation—a calling forth of the spirit, life world, narrative of the very subject that the film explores. Walker’s poetic words, “I am the woman: Dark, / repaired, healed / Listening to you…,” reminds the viewer of yet another filmic backdrop, namely, womanhood or “women’s landscape,” a term poet Sonia Sanchez used when describing Walker’s life and work when interviewed in the film.

Beauty in Truth, like other films in Parmar’s oeuvre, attends to the particular experiences of women within global feminism and lesbian rights movements. Parmar’s award-winning works include the feature length film, Nina’s Heavenly Delights (1996) and several shorts and full-length documentaries including the popular A Place of Rage (1991) and Warrior Marks (1993). The latter was made in collaboration with Walker, and the two artist-activists later co-wrote Warrior Marks: Female Genital Mutilation and the Sexual Blinding of Women as a way to extend their collaborative work on the subject.

Across her body of work, Parmar evidences a commitment to telling the stories of African-American women. A Place of Rage, for instance, celebrates Angela Y. Davis, June Jordan, and Alice Walker and serves as a cinematic intervention that makes visible the contributions of African American women to the African-American Civil Rights, Black Power, and Feminist Movements. Parmar’s return to Walker as a film subject some 20 years after their initial meeting is, in effect, an expression of her desire “to grab every opportunity to reclaim feminist histories for ourselves” and her commitment to ensuring that “feminist foremothers’ are brought center stage where they belong.”

Beauty in Truth sets forth a persuasive thesis that echoes the sentiments of black feminist scholar Joy James: that is, gardens are perfect places for black women warrior poets/writers/activists to rest in, to be healed, precisely because of the ways they function as majestic sanctuaries in geographies and political climates that tend to be unwieldy and unsafe. The scenic images that open Parmar’s carefully constructed and visually compelling film also function as metaphors for tranquility. In Walker’s life, as the film depicts, beauty exists within a mosaic of truths alongside rabid institutional racism, patriarchy, misogyny, colonialism, heterosexism, and so much else. The garden, however, is not only a representation of spaces of care and protection, but it is the place where Walker is shot most often in the film. And when she is not, viewers will notice that some form of flora, like hope(?), is never too far away. Parmar visually narrates the garden motif—possibly as an allusion to Walker’s essay collection In Search of Our Mothers’ Gardens: Womanist Prose that was published twenty years ago—as a reminder that Walker’s life, which includes as many trials as successes, orbits around Walker’s groundedness in the miraculous practices of attending to self—a practice that men tend to be praised for while women are often chided.

Walker, who will turn 70 in 2014, has lived a fascinating and multifaceted life. Born in Putnam County, Georgia, to a sharecropper father and a mother who worked as a maid under the Jim Crow regime, she is best known for her epistolary novel The Color Purple, for which she won the National Book Award and Pulitzer Prize, making her the first African-American woman to win the Pulitzer Prize in Fiction. In Beauty in Truth, viewers are reminded, as Walker narrates her own trajectory as a writer, that she has published numerous best-selling novels, non-fiction books, and short story collections beyond the one that caused her the most consternation, including The Third Life of Grange Copeland (1970), Meridian (1976), The Temple of My Familiar (1989), Possessing the Secret of Joy (1992), Overcoming Speechlessness (2010), Chicken Chronicles, A Memoir (2011) as well as poetry collections like A Poem Traveled Down My Arm: Poems And Drawings (2003) and Collected Poems (2005). Viewers are also reminded that Walker’s rise to international attention and celebration as a writer was not without struggle.

Parmar includes many black and white stills and videos that document Walker’s early childhood years and family life in the South as well as footage that contextualizes a history of violence for those black people living in the U.S. in the mid-1900s. The film, replete with scenes of racial violence, which most U.S. citizens might easily recall from their viewings of docufilms like PBS’s Eyes on the Prize, tells the story of Walker’s interior life as she navigated a social order constructed by white racism, on one hand, and sexism, on the other.

Parmar includes testimony from a range of celebrated public figures who are intimately familiar with Walker’s life and work, including her former husband Melvyn Leventhal, the white Jewish civil rights attorney with whom  she fell in love  while working on social justice projects in Mississippi in the mid-1960s. Leventhal’s placement in the film, as well as the pictures of Walker embracing her woman lover Jean Wiesinger, complicates myopic renderings of Walker the anti-racist, feminist “writer,” “author,” “poet,” or “activist” and narrates Walker—the human being—whose writing, senses of spirituality, poetry, love making, and protest have been interconnected forces that animate one another.

Parmar’s interviews with a cast of well-known public figures like Evelyn C. White, Beverly Guy Sheftall, Howard Zinn, Gloria Steinem, Jewelle Gomez, Quincey Jones, Steven Spielberg, Danny Glover, and Angela Y. Davis as well as Walker’s brothers, James and Fred, among others, attest to the ways that Walker has always sought to live a life in which her art, politics, and being are united. Parmar expands her pool of witnesses beyond Walker’s close friends and allies by including the perspective of a younger generation of contemporary cultural workers/thinkers, like black queer feminist Alexis Pauline Gumbs, whose work is shaped by Walker’s own, demonstrating Walker’s sustained impact on present-day feminist politics.

The film is also quite successful at narrating Walker’s multiple encounters with the public and the resulting hurt that she experienced. From the public retaliation, including the rebuke offered by other African-Americans, in response to the production of the Spielberg directed film of The Color Purple to the criticism she has received for her recent Palestinian solidarity activist work, Walker has faced an insurmountable display of scorn. Most compelling are the clips Parmar includes of black cultural critics slamming Walker on public television shows, which are interlaced with shots of Walker sitting alone recalling the deep pain and isolation that she experienced at the time.

The absence of Rebecca Walker, Alice Walker’s daughter, from the film is noticeable and illuminates the very distance that exists between the mother and daughter in real life. Parmar explores the distance by including testimony about the fractured family ties from Walker’s closest friends, including a former partner, Robert Allen, and others like the Walkers’ family friend, Gloria Steinem. Walker also speaks candidly about her broken relationship with her daughter and, when she does, her pain is as evident as Rebecca’s invisible presence and muted voice. According to Parmar in an interview she gave on AfterEllen.com, Alice stated in response to a question centered on her relationship to her daughter at the film’s world premiere in London during International Women’s Week, “I have a certain spirit and I didn’t suppress it. I have tried hard to honor it . . . It was the spirit of creativity—standing with people who are in danger, the commitment to the people I love, including my daughter . . . I was brought up in a culture where to be a mother . . . was to be the mother in the old, old, old sense, where you were the mother to children everywhere.”

But like her own mother, who she remembers as one who possessed “mother’s magic,” the stills included in the film of the elder Walker and daughter are representative of the charmed relationship that once existed between the two. The film, indeed, leaves viewers with the hope of return: a return of the magic that has seemingly vanished. Yet, a domestic hope of return for Walker must always be considered in relation to the right of return that Walker now speaks publicly about regarding the right of Palestinian people to return to land that was once their own. At the end of the film, Parmar includes clips of Walker traveling on the Freedom Flotilla, which was stopped from going to Gaza in 2011. Walker speaks fervently about her deep desire for the undoing of the Israeli occupation in the same way that she speaks passionately about the possibility of one day seeing her grandson. Such is the life of Alice Walker: the beautiful and open and complex life of one whose truth may be too thorny for some to bear.