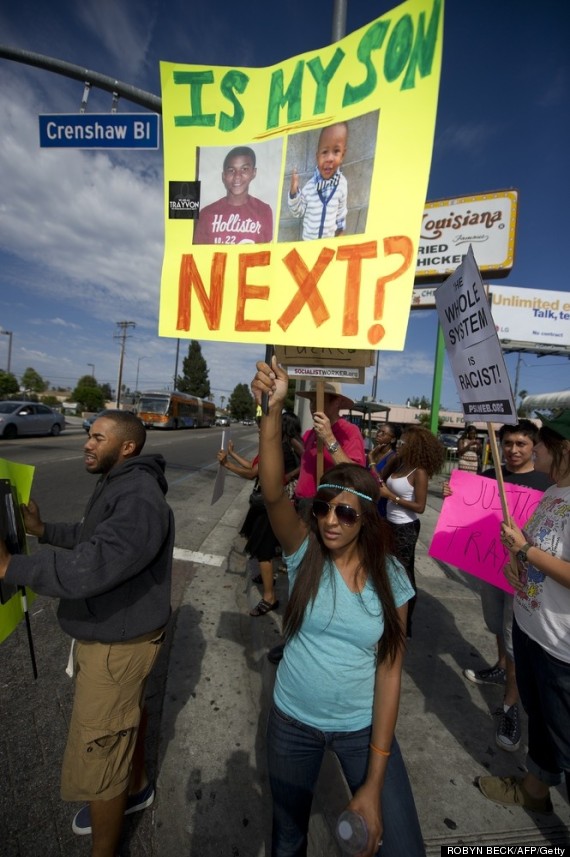 In the hours and days following the Zimmerman verdict, a kind of racial segregation has re-surfaced, not in formal, legal terms but with regard to human affect. The line is drawn not in terms of ancestry but with regards to a different set of relations. The Zimmerman verdict fortifies parental fears that particular children are especially unsafe. Some of us are raising Trayvon, and some of us aren’t.

In recent forum on race, racism, and feminism, here at The Feminist Wire, Duchess Harris explored the problematics of white feminist responses to issues contouring Black women’s lives. Her essay titled “Your Feminism Ain’t Like Our, Because We are Raising Quvenzhané” came on the heals of the obscene treatment of the Oscar nominated actress and white feminists’ relative quiet in the face of her attack.

Harris’ essay identifies ways white feminists consistently function as bad allies to Black women and the complex reasons why, but it’s the simplicity of her title that calls to mind a basic but penetrating difference between white and Black feminists.

By and large, our children do not resemble one another’s, and therein lies a critical gap in understanding.

“Can we talk about how I can be a better anti-racist right now?”

“But not all white people see it that way.”

White feminist silence and bad allying are two sides of the same coin. Both responses are shaped by the very same problem. White feminists’ indifference and/or anxiety produces silence at the exact moment that solidarity is needed. And white feminists’ egoism and/or lack of empathy drives bad allying when deep listening is what is called for. In both cases, the perspective, emotion, or interests of white feminists trump Black women’s pressing needs.

Given the frustration with white feminists’ silence and bad allying in the face of violent racism, there seems to be another kind of response desperately need in this very moment.

Harris’ declaration “We Are Raising Quvenzhané” may provide us with a place to begin. In making such a claim, Harris is naming the shared experience parenting Black children, who are uniquely vulnerable due to enduring patterns of racism in the United States.

What do we learn by thinking about the difference between what it’s like to raise Quvenzhané” and to not raise Trayvon? How does who we are raising (literally or in our imagination) impact our experience of this event, our immediate response to it, and our awareness of others like it?

Of course, many Black women are not literally raising Quvenzhané, and many white women are raising sons that look like Trayvon. But a white feminist response that contests silence and hopes to avoid bad allying might begin by feeling though these questions.

What Black (and non-Black) women (and men) who are raising boys that look like Trayvon and girls who look like Quvenzhané know especially well is that Trayvon Martin’s death is not unique. And deaths like his are attributable to widely held perceptions that are dismissed as inconsequential at the same time that these beliefs yield life and death consequences.

If Trayvon Martin’s death were an isolated event, it would be utterly tragic. If George Zimmerman’s pursuit of an unarmed Black man were unique, his behavior would be monstrous.

Neither one of those things is true.

The death of Martin and boys like Kimani Gray  depend upon a broader structure of white supremacy wherein the perceptions of Black men are bound up with criminality. The killing of Kendrec McDade and Timothy Stansbury Jr. happen because subtle (and overt) stereotyping of Black boys and men goes uninterrupted.

All of these boys were unarmed. All of their killings were ruled lawful. What does it say that I could have chosen from hundreds of names of unarmed Black children (overwhelmingly boys) shot and killed?

This moment is deeply personal for the people who see their sons in the faces of these boys and who know that this event is not an isolated one. If those raising Black children need to be vigilant about how their children are perceived and the potentially violent consequences of those perceptions, and if there is no evidence that white children experience disproportionate surveillance and excessive police force, then we have vivid confirmation of one fact— there is a racial disparity around the risks associated with being a child and thus a racial disparity in the experience of parenting.

The killing of Trayvon Martin, the subsequent trial of George Zimmerman, and the racially disparate responses to these events point to visceral differences in the lives of women (and men), based on the race of their children.

While white feminists shouldn’t try to make these events and the aftermath “about” white people, but we should be on guard against white defensiveness or white dismissals of what sustains this pattern of violence. Widespread racist perceptions make it possible for police and neighborhood watch volunteers to assume the worst of Black children. Most importantly, white feminists can’t act as if these thoughts are not a big deal. They’re a huge deal.

Early this summer on a visit home, I walked through the New Orleans French Quarter on a Sunday afternoon with a white child I dearly love and her parents. While we visited on a corner waiting for the light to change, a group of about ten Black boys approximately the same age as the girl I was with approached the corner biking fast and furious. They took the street corner with expert skill. Their bikes hugged the road as they tilted at a 45-degree angle towards the pavement. The moment sang summertime to me—children free to fill their days with things so sacred they simply had to race to fit it all in. But my breath stopped short when the child I walked alongside named her perception of those few seconds, “They’re probably doing something bad.” I am grateful that her father interrupted the way she made sense of the scene, suggesting that she had no evidence to draw such a conclusion, but what was made clear was that those perceptions already live inside of her.

What I do know is that these perceptions don’t just shape our thoughts and ideas, they find their way out into the world. They travel from the brain through the nervous system to the musculature of the index finger and into physical world through the barrel of a gun. These perceptions rip open the bodies of Black children and the hearts of parents who fear such outcomes for their Black boys and girls too.

Some white feminists are raising children that look like Trayvon. Many more are not.

But if we seek justice, none of us can wait to have sons that look like Trayvon to take action. When the lives of children hang in the balance, discomfort or fear can’t lead to continued silence about issues that disproportionately impact Black women. And when there’s been a long established history of bad allying, white feminists (myself included) need to get crystal clear that the ongoing and sustained violence directed at Black children is a feminist issue. 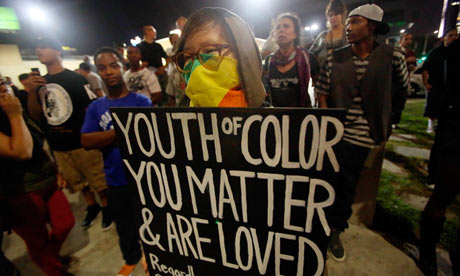 Many white feminists continue to live lives contoured by racial segregation—residential, occupational, social, cultural, and otherwise. In writing about parenting here, I do not want to suggest that no one has been talking about these very issues. Over the last year, many, many Black women have written about navigating the violence racism poses to their children. As I think about white feminist silence and bad allying, the obvious place to start is with the words of parents raising Black children. Here are only a few of the countless reflections written by Black mothers raising Black sons in response to the killing of Trayvon Martin…

“A Message from a Black Mom to Her Son.” Dyan Watson

Related Itemsbad allyingGeorge ZimmermanTrayvon Martinwhite silence
← Previous Story No Justice for Trayvon: White Women in the Jury Box
Next Story → A Statement on the Reclamation of All Black Life: For Trayvon, Marissa, & Jordan