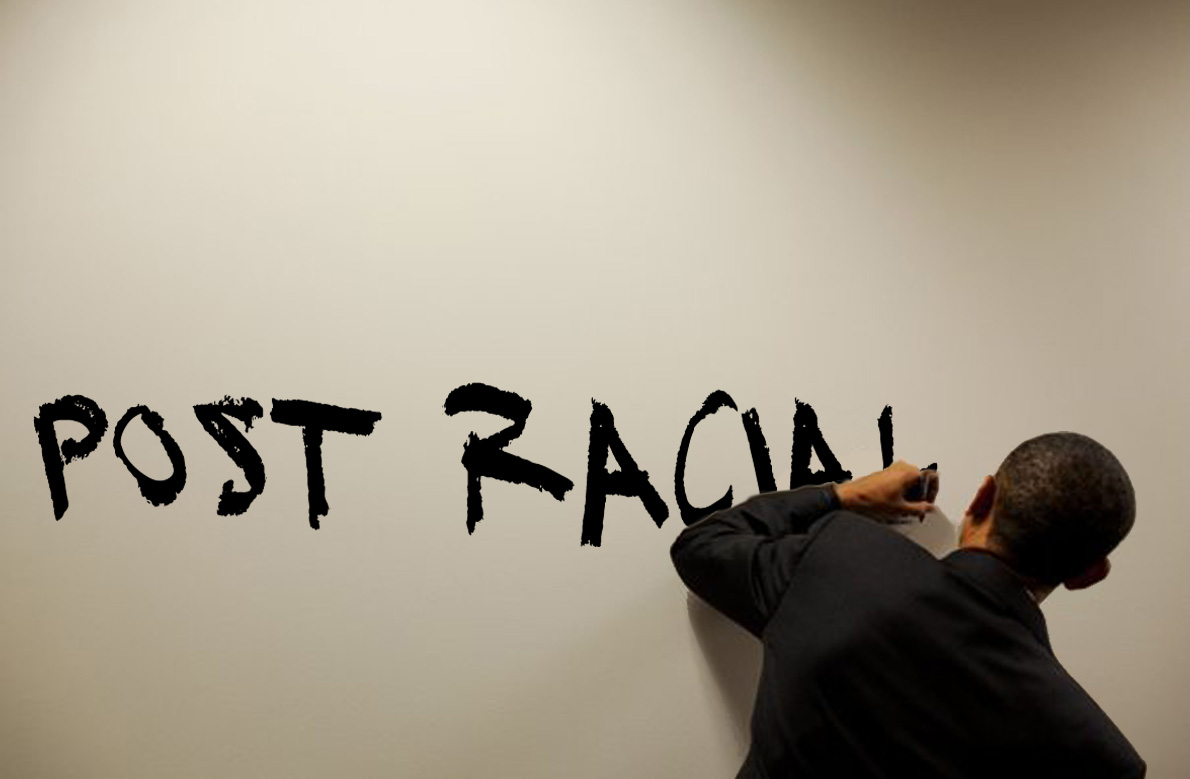 The killing of Trayvon Martin, the trial of George Zimmerman, and the aftermath illustrate how much race matters.

Yet the response from many, particularly white America, has been to deny, dismiss, and blame.  And Zimmerman apologists and those privileged by their own post-racial fantasies have been particularly busy.  Take Juror B37 for example, who concludes that, “race did not play a role” in the Zimmerman trial or verdict.  Jonathan Tobin agrees, arguing, “The race hucksters need to demonize Zimmerman and B37 because without marking them down as inhuman racists, the country will see the case for what it is rather than the tale of revived Jim Crow that the left is so desirous of promoting.” And according to yet another Zimmerman apologist that sees Zimmerman as the “true” victim, Peter Roff, outside agitators are to blame for “injecting race” into the case.  He posts, “Zimmerman, nonetheless, remains in jeopardy because of the racial overtones bystanders, including President Barack Obama, interest groups and the media injected into the case.”  One poll in the Sun Sentinel found that 75% of respondents said race had nothing to do with the trial.

White denial, dismissal, delusions, and racial cowardice are dangerous; they too are part of the trauma that is taking place right now.

Claiming that race has nothing to do with the case, and that those who are “inserting race” into the discussion are stirring the pot of racial hostility is both absurd and laughable, if only it wasn’t so destructive; it is a symptom of WDD – White delusional disorder.  The ‘race doesn’t matter gang’ – AKA the twenty-first century’s flat earthers perpetuates the nation’s cowardice toward race.

Let me say this clearly with hopes that the deniers hear me: race matters and the denial is the real source of tension, division, and everything that surrounds the George Zimmerman Trial.

One has to look no further than the jury to see how much race matters.  Five white women.  Not only does this matter in this moment but it has a larger history and context.  A 2010 report in the New York Times found that Blacks were typically “Blocked From Southern Juries.”  While the Supreme Court ruled in Baston v. Kentucky (1986) that jurors could not be dismissed because of race, white-only juries remain a reality of American jurisprudence because attorneys routinely dismiss black jurors.  For example, in 2003, the Louisiana Crisis Assistance Center reported that “prosecutors in Jefferson Parish felony cases strike African-American prospective jurors at more than three times the rate than they strike white prospective jurors.” On 80% of criminal trials, “there is no effective black representation on the jury.”  This is evidence of what Michelle Alexander describes as the “New Jim Crow” or what Harry Edwards calls “James Crow ESQ.”

Denying how race matters in the selection and in trial outcomes is enemy of not only equality and fairness, but also justice itself. Creating diverse juries is necessary if justice is a desired outcome of the criminal justice system.  According to Shaila Dewan, “Studies have shown that racially diverse juries deliberate longer, consider a wider variety of perspectives and make fewer factual errors than all-white juries.”

Beyond these FACTS, can you imagine the outrage if an all-women jury was impaneled for a sexual harassment case?  Can you imagine if the Steubenville Rape Trial had an all-male jury?  What sort of rightful condemnation would have ensued?  Even more telling, what sort of response would there have been if this jury was all women?  Can’t you hear the anti-feminist bashing?

Hanity, Rush, I see you.

Can you imagine if the juries adjudicating the killings of Oscar Grant, Sean Bell, Amadou Diallo, and Jordan Davis were all black?  What sort of national conversation about fairness and equal justice under the law would we be having then? What about if the jury (and the prosecutor for that matter) had been all black or all black males with the Central Park 5 Case?

There would be outrage, irrespective of fact that had these juries been more diverse, justice might have been actualized.

And then there is the issue of racial profiling, for example, the schizophrenic response from Zimmerman defenders, who simultaneously claim that Zimmerman followed Trayvon Martin because he “was acting funny” and “suspicious” (not because of race), yet, note that Trayvon looked like one of the individuals arrested for past burglaries. Notwithstanding the ridiculous binary, the contradiction here is really about denial and racial cowardice.  As Jamilah Lemieux brilliantly notes white privilege is one of “a hell of a drug.”  And, it is one that is killing; dividing; and hurting.

While facts and reality might be a dangerous pill to swallow, they are an antidote.

Lisa Bloom notes that 100% of [Mr. Zimmerman’s reports] about suspicious persons involved African-Americans.” While The Daily Beast reveals that of the 46 calls, not 100%, implicated African Americans, there is quite a bit of evidence that points to the ways that what is deemed “suspicious” and who is recognized as Black were synonymous.  To this end, the race denial crowd, the racial flat earth crew, and the Zimmerman defenders may want to review the definition of racial profiling: “Racial Profiling refers to the discriminatory practice by law enforcement officials of targeting individuals for suspicion of crime based on the individual’s race, ethnicity, religion or national origin.”   And before you, cite “behavior,” his “hoodie,” his “swaying in 7-11” as “evidence,” lets look at the actual evidence in the 911 transcripts, as documented by Monica Casper:

“…looking at all the houses”

“Now he’s just staring at me”

“He’s got his hand in his waistband. And he’s a black male”

“Something’s wrong with him. Yup, he’s coming to check me out, he’s got something in his hands”

“These assholes always get away.”

Casper summarizes, “Race, gender, and criminality, all woven into one ‘suspicious’ package: a young, unarmed Black boy carrying a bag of candy.”  Determining that someone is suspicious and up-to-no good because he looks like others who purportedly committed a crime in the neighborhood is the very definition of racial profiling.  So unless you are going to argue that “these assholes” is a reference to males, those wearing hoodies, skittle purchasers, or 6-2 teenagers walking home, spare me the race doesn’t matter denial nonsense. It ain’t true just because you say it.

Research proves that whites, from college students to police officers, are more likely to misidentify a gun when in a black hand.  Moreover, according Project Implicit,  “An analysis of more than 900,000 completed Implicit Association Tests (IAT) at the Project Implicit website suggested that more than 70% of test takers associated White people with good and Black people with bad more strongly than the reverse.”

The refusal to look at this research, to examine the impact of implicit bias tests, to look at persistent stereotypes, to talk about racial profiling is the true source of discord and division. From the efforts to portray Trayvon Martin as a “thug” to persistent references to white victimhood and heroism, from the fear mongering around the “riots” that never happened, to the obfuscating references to “black on black crime” amid a refusal to talk about white-on-white crime in Newtown, Aurora, and elsewhere, race is at the center.  Ignoring and denying that and the broader context isn’t a solution.