Paula Deen. Paula Deen. From a titan of the down home cooking industry, $17 million dollars strong, with books and TV shows and a product line and restaurants all over the south, Deen has fallen in just the last two weeks to a shamed superstar. After employees charged Deen with racial and gender harassment, and stories of her past use of the n-word have come out, the Food Network has dropped her show. Target and Smithfield Foods are cutting their ties. Caesar’s Entertainment Casinos has announced it will close all of her restaurants and reopen them with new branding. Even the infamously un-PC Walmart has announced it will sever its relationship with Paula. She has been divorced, disgraced, and shunted to the sidewalk.

Meanwhile, some white southerners are furious at the media for its abandonment of Paula in her time of need, and furious at the former employees who charged her with gender and racial harassment, refusing to accept her very public apology. The usual three hour wait in line at her Savannah restaurant is now even longer, as her supporters declare they will boycott the companies that have left her out to dry in the summer sun. 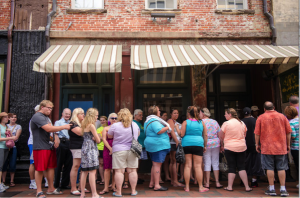 I’ve eaten at Paula Deen’s restaurant in Savannah, that most southern of cities. (The chicken was delicious.) My mother’s Southern white family came from a similar background as Deen: a mix of southern hardscrabble and impressive practical know-how, where whites picked cotton only one field over from where African Americans were picking it, and where occasionally there were tentative sharings at the weekend pig-roast. Paula Deen does not come from that stock of middle-class white women who were attending Junior Club luncheons while their black maids cleaned their houses.  Rather, she comes from the strata that are obstinately and impressively proud of their manual skills, that make fun of people who try to ‘put on the dog’ or make themselves appear better than they are. Paula Deen’s unembarrassed folksy self-presentation strikes a powerful chord among southern white women from modest backgrounds who still keep a coffee can of bacon fat near the stove. She got their attention for making it in the business and media worlds, and she got their affection for making her success by cooking food that was the comfort food they, and I, grew up with. This was the Platonic Form of comfort food, and not this artisanal imitation low-calorie comfort food of Brooklyn. Deen was the real deal.

So what are we to think? She’s old, right? She’s just being who she is, right? And she doesn’t put on airs, isn’t that all good? Can’t we give her a break? And when all the multibillion dollar businesses throw her under the bridge, shouldn’t we feel sorry for this woman who is getting sacrificed so bad actors like Walmart can portray themselves as good by comparison just so they can keep on selling stuff to black and brown and poor people?

The generational excuse doesn’t work. Let me just be clear. Yes, there are older people in every community who get a pass on a variety of topics, because we love them and owe them our gratitude and respect. But this is different. Paula Deen is not our collective grandmother cooking up some butterbeans on the back porch. She is a very successful businesswoman who has traveled all over the country and had the opportunity to talk to lots of different people and to learn. But she chose not to learn. She didn’t learn that slavery does not make a good party theme. She didn’t learn that it obviously makes a difference who is using what words. She didn’t learn that a white woman calling loud attention to someone’s dark skin can feel painful in a racist world. She didn’t seem to consider the possibility that her black employees were not telling her 100% of what they really thought about what she said and how she said it, because they needed the job.

White women of Paula Deen’s background and generation have been getting a pass for too long. We need to just stop. This is not northern and high-class political correctness stepping on the throats of an authentic culture down south, but a white southern culture that needs to grow up and face some realities. Learn some things about the past as well as the present. Rethink who they think they are. Find avenues in which they can discover what African American people really think about the south when they can speak their minds as baldly and uncensored as Paula Deen did.

I do have sympathy for Paula Deen. And I do believe it is important for us to be able to hear a white person’s apology and accept it, when acceptance is the right thing to do. In fact, some more of that in public could be a helpful thing. But apologies that backtrack, make excuses, blame others, and that don’t indicate a real intention to learn difficult truths aren’t worthy. And don’t provide real comfort.

TFW Collective Member Linda Martín Alcoff teaches philosophy and women’s and gender studies at the City University of New York, both at Hunter College and the Graduate Center. She is a past president of the American Philosophical Association, Eastern Division. She has written and edited several books on feminism, race, Latin American philosophy, and epistemology, including Visible Identities: Race, Gender and the Self (Oxford University Press, 2006). She is currently writing a book on the future of whiteness in the U.S., entitled Getting Over Getting Over. Besides being an academic, she has also been active in several movements, from the recent Occupy to, years ago, the effort to defeat the Klan. Her background is half-Latina and half-white, with a Panamanian father and a white southern mother who grew up poor. For more info on her work, go to www.alcoff.com.

Related Itemsfood politicsPaula DeenracismU.S.
← Previous Story Wall of Shame: George Zimmerman’s Defense Team et al.
Next Story → Dispatch from the 'Very House of Difference': Anti-Black Racism and the Expansion of Sexual Citizenship – OR – We Need to Do So Much Better at Loving Each Other