Life is easier, kinder, and more lenient when you are white, and this may be why George Zimmerman decided to downplay his mestizo origins and identify as white/white Hispanic during the Trayvon Martin trial.  Zimmerman is a partially white half-Hispanic, and as such he was already closer to whiteness and the privilege it grants than Martin ever could have been. But perhaps Zimmerman knew that just being a partially white mestizo wouldn’t win him an acquittal, and so he decided to identify with a category of “really” or “fully” white people who would sympathize more with a white man whose actions reflected his (and their) fears of black America.

When I was growing up in Los Angeles during the 1990s, “really” or “fully” white meant Northern-European looking. Aryan looking. Those with the combination of an olive complexion, a “big” or “bumpy” nose, and black hair were not “really” white.  These “not really white” people included individuals belonging to groups officially labeled “Caucasian” (i.e., Eastern European Jewish, Arab, Middle Eastern, Southern Italian, or Central Asian), as well as mixed raced people with a partially white background. They were the “sort-of white” people, because of their official racial status or their mixed race background, but “not white” in the way people treated and perceived them. The “sort-of whites” were put into an ambiguous “other” pile and were constantly asked (like many other non-white Americans): “Where are you from? I mean—originally?” “Sort-of whites” never felt really truly American, and those of Middle-Eastern, Arab, and Central Asian descent faced the most discrimination from peers, not only because of the way they looked, but also because their families were recent immigrants.

Discrimination against “dark-ish” immigrants in the U.S. is as old as the country itself. White Americans have always had a socioeconomic interest in proving that they are the “real” Americans with the right to establish and control institutions. The category of white, in regard to European immigrants, was relatively fluid until the mid-nineteenth century, when it became restricted to individuals of Anglo-Saxon origin. Europeans perceived to be of the darker “variety” (e.g., Polish, Jews, Italians) occupied a kind of “in-between” space when it came to racial identity and designation. The official status of “in-between” “sort of whites” of European, Arab, Middle Eastern, and Central Asian descent changed to “white” in the twentieth century, yet many people belonging to this category still don’t feel “really” white. The more purportedly “Arab” or “ethnic looking” they are, the more they feel and are treated as non-white.

I have experienced what it is like to be a “sort-of white” person because of my racial background,  my upbringing, and the way I look. My dad is Mexican-American of mostly Amerindian descent and my mom is of German, Scottish, and Cherokee descent.  Ethnically and culturally speaking, in other words, I am partly white. Many Mexican-Americans I knew growing up were either poor or lower-middle class and experienced economic as well as cultural marginality. My family wanted my sister and me to feel American, not marginal. Ensuring this meant ensuring that we were imbued, at least partially, with what had become a Euro-centric English-speaking white culture. This culture has always been institutionalized as American. Other American traditions, other holidays, values, philosophies, and languages, have been systematically excluded, never allowed to become American. This is why black, Hispanic, and Asian cultures, despite having had a firm presence in America for generations, are still “hyphenated” cultures. Though I was surrounded by the Spanish language, Mexican food, music, and holidays growing up, I was also exposed to homogenized, anglicized, and middle-class American culture. And this may be why some of my Mexican-American/Chicano friends and acquaintances can’t always relate to me— to the part of me that has, in their eyes, “become white,” culturally speaking.

My physical appearance, however, has shaped the “sort-of whiteness” I experience most explicitly. Many people in the U.S. don’t think I look Hispanic, and usually assume I am of some other “dark,” “brown,” or “sort-of white” ethnicity.  As a result, white acquaintances often feel free to make invidious jokes or derogatory remarks about Mexican people in front of me. Some make these jokes and remarks knowing my ethnic and cultural background, but perhaps they assume that the access to whiteness I have because of my physical appearance will make me indifferent to their cruelty.

Though my appearance has often allowed me to avoid anti-Hispanic prejudice, it has exposed me to the kind of prejudice some “sort-of white” people face. Conflating nationality, race, and religion, many people in the U.S. lump Middle Eastern, Central Asian (and sometimes South Asian) nationals, Arabs, and Muslims together into one category of “darkish” or Muslim-ish” looking people. Many people in the U.S. assume I belong to this group, and have discriminated against me, accordingly.

When I was in my early teens, a few white acquaintances tried to insult me by calling me the “Armenian chick,” and made fun of the bump on my nose saying it was ugly and Persian or “Middle Eastern” looking. In college, I received an anonymous email, and attached to it was a picture of two naked women. Both women were lying down, legs spread, vaginas center stage. One woman was a blonde whose pubic and leg hair had been shaved. The other was an older dark-skinned Arab woman, unshaven. Under the Arab woman a caption read, “Here’s what they have,” and under the blonde woman, “Here’s what we have.” It hurt even more when some Hispanic and African Americans began discriminating against my sister and me post 9/11, perhaps eager to finally feel like they could become part of the American “us” versus the hyphenated “them.” In one incident, a man yelled at my sister while she was walking down the street, “Get out of my way, you Arab bitch.”

In no way am I implying that I have experienced what it is like to be Arab, Muslim, or Middle-Eastern in the United States. Moreover, I recognize the advantages I’ve had as a person perceived to be “sort-of white,” “part” white, or “brown-ish,” as opposed to the more explicit and cruel forms of hatred and institutionalized racism that those perceived to be “fully” non-white experience. My point here is to show how the mixed race, partially white, and/or “sort-of white” experience can reveal how problematic and exclusionary American understandings of whiteness are, and, therefore how real and severe the problem of race still is.

Even many individuals of Southern European and Eastern European Jewish descent still don’t feel fully American because of the way they look. Some of my friends and acquaintances that belong to this group have obtained plastic surgery or blonde streaks in an effort to “Aryanize” themselves. This means that even though they have, to a certain extent, become white culturally and in official rhetoric, they have not become white physically or psychologically. And if they still don’t feel American because they don’t feel fully white, then what does this mean for everyone else?

It means that whiteness has not become more inclusive. It means that whiteness welcomes and rewards those willing to hide, downplay, or remove traces of ethnic features, traditions, or origins (read: George Zimmerman). And it means that those who have no chance of being even semi-included in this exclusionary privileged club (read: African Americans), become even more marginalized and even more non-white than before. It means that the closer one is to being black, the harder, harsher, and more unjust life will be.

When they were growing up, my dad and step-mom both faced discrimination and feelings of inferiority because of their poverty and ethnicity. During a recent dinner table conversation, they told me that they have always hoped that I would never experience shame. Shame is debilitating yet persuasive in its ardor, like a jealous friend. Shame keeps us company in the hide-out it has forced us into. I didn’t want to upset my dad and step-mom, so during the discussion, I didn’t reveal to them that throughout most of my life I have experienced a great deal of shame in regards to the racism I have experienced. I have felt and still feel misunderstood by those who perceive me to be too “Middle-Eastern-ish,” “not Chicana enough,” or “not white enough.” I am often asked why my name, Amalia, isn’t spelled with an accent, the way it is spelled in Mexico. And I am often asked, “What kind of name is Amalia—I mean originally?”

Lately, I have been trying to use my personal experiences to help challenge understandings of American whiteness and race. Lately, I have been responding to this question by saying, “Amalia is an American name.” Its ambiguity is part of the Middle Eastern story I am assumed to have. Its lack of accent is part of my assimilation story, part of my white story. And its accent fills in the confused space that is my México.

They say shame starts to lose its poison when it is turned into a story. And so I try. 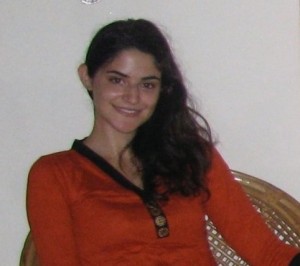 Amalia Clarice Mora is a doctoral candidate in ethnomusicology at the University of California, Los Angeles. Her doctoral research examines how tensions related to class, caste, and gender are negotiated within the context of music tourism in Goa, India. Her other research interests include interracial attraction and mixed race experiences in the U.S., and how sociocultural anxieties related to both manifest themselves in unofficial discourse and texts, such as rumor and internet comment sections.

Related ItemsGeorge ZimmermanImmigrationRaceTrayvon Martin
← Previous Story In the Aftermath of the Trial
Next Story → Op-Ed: The Responsibility of Virgins