An Open Love Note to My Son: On Mourning, Love, and Black Motherhood – The Feminist Wire

Home / Black Women / An Open Love Note to My Son: On Mourning, Love, and Black Motherhood

An Open Love Note to My Son: On Mourning, Love, and Black Motherhood

Raising Black children – female and male – in the mouth of a racist, sexist, suicidal dragon is perilous and chancy. If they cannot love and resist at the same time, they will probably not survive. And in order to survive they must let go. This is what mothers teach – love, survival… (Audre Lorde, “Man Child” in Sister Outsider, 1984)

When I was pregnant with you, I was sure you were a girl. Even when sage after sage looked hard at my big round belly, shook their heads, and told me, “No, that’s a boy,” I did not believe them. I could not conceive of having a boy. Little boys were never a part of my mothering fantasy. I always imagined myself as a mother of a girl. One girl to be exact: Just like my mother, my mother’s mother, and most of my aunts. So, when your father and I went for our five-month pregnancy ultrasound to learn your sex and make sure you were okay, I was on a journey of confirmation, not discovery.

I laid down on the familiar faux-leather doctors table. Lifted my shirt and waited for the cold jelly to be applied. We were both giddy with anticipation. In our minds, we didn’t “care” whether you were a boy or a girl. It was the excitement of hitting another milestone in the pregnancy that was euphoric. The doctor began to describe your heartbeat, vital signs, count fingers and toes, all as we watched you peacefully swim around on a projection screen. Already trained in the dramatics of the process, the doctor waited to the very end of the visit to ask us if we wanted to know your sex. We took a breath and said, “Yes.” Bright-eyed in anticipation of our excitement, he said, “See this right here, this is a penis, and there is his scrotum, you are having a boy!” My breath stopped momentarily and a breathless shiver ran through my body. I forced a smile. I already loved you deeply, but knowing that you were a boy, and not a girl, paralyzed me with fear.

As we walked out of the doctor’s office, your father looked at me and asked, “Are you okay?” as if he knew that my head was spinning with emotions that I was only beginning to understand. I forced another smile, answered, “Yes, I am fine,” and went to the bathroom to gather myself. I washed my face and tried to snap out of the sense of vertigo I was feeling. But I couldn’t shake the dull ache of sadness that I felt and I could not understand why. The good feminist in me chastised: “Sex is a social construct; pull yourself together.” But the cold feeling remained. As we walked out of the clinic onto the sunny sidewalk, the cold feeling turned into panic. Ashamed, I tried to hide this from everyone: your father, your grandparents and my friends. I did not want anyone to know that knowing your were a boy gave me a sense of dread that I could neither understand nor explain. I started to make side comments to our family that hinted at my emotional distress. I would say things like, “I don’t have the slightest idea what to do with a boy,” and “we just don’t have any boys in our family,” but my mind could not or would not allow me to put into words the unspeakable terror that I felt.

I was in a state of shock and it took me a long time to understand why. It wasn’t until February 2012, after you were born the beautiful and amazing person that you are and had been in the world almost a year, that I began to confront my shameful secret. It was the day I learned that Trayvon Martin had been shot and killed, and heard about the circumstances of his death. When I heard the news I sat down and wept. I wept for him. I wept for his family. I wept for Black people everywhere. But most of all I wept for you.

I, a Black mother of a Black boy, knew the pain Sabrina Fulton was experiencing through an intense sense of cross-spatial, cross-temporal diasporic empathy, and I was petrified by the thought of losing you, or any more Black mothers losing any more Black children. Yet another murder of another black child misconstrued as a justifiable homicide forced me to confront the secret, gender-biased panic about Black mothering I had carried with me since I was a child. As irrational as this may seem, finding out that were a boy felt like you were given a death warrant. I knew then like I know now that Black girls are also disproportionately impacted by police violence, and I also knew, much like Jamila Aisha Brown observes, that this reality is invisible and silenced. We should never forget Aiyana Stanley-Jones, Reika Boyd, Malaika Brooks, Jaisha Akins and Frankie Perkins, Black women killed and unmentionably harmed by the police whose lives recall the all-too-often-ignored reality of state violence against Black women in the United States. And the realities of police violence against Black transgendered people is literally unconscionable in our society –omnipresent yet invisible to most who are not a part of that community.

Knowing all of this, and acknowledging the obvious contradictions inherent in my fear, I still could not shake the feeling of helplessness and sadness I had associated with bringing you into this world. In my traumatized and irrational mind, mothering black boys was imminent mourning, and the empathy I felt for mothers like Sabrina Fulton, Mamie Till, and Laura Nelson brought that into stark relief. But my feelings were not only born out of the hegemonic silence that shrouds the real lethality of white heterosexist patriarchal supremacy on Black women and Black transgendered people. It was also born out of the raw and painful emotions of love that I have for you.

Quietly and almost unknowingly for years, I had developed a sense of life and love that was being shaped by my preoccupation with the senseless killing of Black children that happens daily in your two homes: the United States and Brazil. Knowing, writing about, and researching Black death had paralyzed me with the fear of loss. Before I became a mother, I could compartmentalize that feeling and distance it. However, after I became a mother, I could no longer distance the realities of violence that I had come to live with in my daily thoughts and reflections. Even as you grew in my womb, I unconsciously began to crunch statistics in my mind in an attempt to create a scenario that somehow might make your survival more probable. Quite fundamentally, I loved you so much that I could not bear the idea of you possibly being taken away from me by the “suicidal dragon” that is our world. My hope that you were a girl was my desperation in believing that somehow there would be a way to beat the odds of the game in the Russian roulette of Black life in the Americas.

After spending years personally and politically speaking out against police violence (and its close relative vigilantism) against black people in the United States and Brazil, and tracing the genealogy of the torture and death of Black people from hemispheric American slavery to lynching, death squads, and policing in both nations, I had come to accept that the world takes black boys from their mothers, often right in front of their eyes, without rhyme or reason, at random, and yet with cruel intent.

I met the mothers of Canabrava at the First People’s Gathering for Life and a Better Model for Public Safety (ENPOSP I) in Salvador, Bahia in 2009, just after one hundred civil, military and special operations police officers invaded their neighborhood and summarily executed five young men from that community. Three of the young men, Edmilson Ferreira dos Anjos (22), Rogério Ferreira (24), and Manoel Ferreira (23) were brothers. According to their sister, the police invaded their house, pulled their mother out, and shot the boys while they were watching TV, on the couch and sleeping in a bedroom. I met Debora from Mães de Maio whose child was one of the 493 people the police killed in São Paulo in 2006 in retaliation for the PCC revolts. I met Deise, one of the thousands (yes, thousands) of Black mothers of a child killed by the police in Rio de Janeiro in the past ten years, who had to hire a private investigator to find her son’s mutilated body after he was assassinated. In their eyes, I saw the living death that happens when the joy of your life has been sucked out by white supremacy. The same look I had seen in Sabrina Fulton’s eyes, Mamie Till’s eyes, and the pictures of the mothers, sisters, daughters, and partners far off in the shadows of lynchings in the United States waiting to gather their loved ones’ remains. I remembered the aunt you never knew who had lost her boys to police violence and street violence but had kept her girls. Because I knew more black women who had survived police violence (even though their lives had become a living death), I longed for you to be a girl.

Ever since you were born, I have grappled with the terror I felt the day I found out you were a boy, and now that your little brother is here as well, my journey to overcome this terror has become more acute. Yet beautifully, mystically, you have taught me to belie my fears and just love you, recognizing what Audre Lorde said many years ago: “If [you] cannot love and resist at the same time, [you] will probably not survive… For survival, Black children in america must be raised to be warriors” (1984:74-75). So my promise to you is to raise you as a warrior, because this is the only thing I can do. And know that this is my way of loving you every step of the way. Everyday that you live and love, smile and giggle, laugh and cry, in your bright eyes you carry the happiness of God/Olorun and I am reminded that you have come back to fight another day. You and your brother are not mine, but one day you will grow up into fierce warriors for truth and justice. 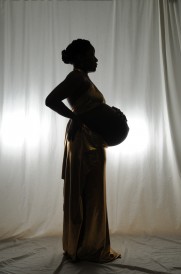 Christen Smith is a mother, writer, and researcher who currently works as an assistant professor of anthropology and African and African Diaspora studies at The University of Texas at Austin. Her work explores the politics of performance, race, violence, and the body in the Americas. She has published essays on performativity and racial formation in Brazil, police violence and the politics of geography in Salvador, and the transnational collective black female body. Since 2001 she has been collaborating with Black activists in Salvador, Bahia around the fight to denounce police violence and death squad actions against the Black community in Brazil. She is a member of the transnational grassroots community action organization Quilombo X.