In my first creative writing class as a Brazilian international student at a private American college I received my fiction assignment back with comments and a tall slender “A” written in green ink. I was glad to see validation that I, a non-native speaker, could write well in English, despite knowing that my English-as-a-second-language skills could never be rated any higher than “near-native fluency.”

My college professors have been great with grading my assignments like they would grade any other students’ with no “special needs,” whatever those might be. I do believe this is fair. After all, I would receive the same degree as the native-English speakers would: a Bachelor’s Degree in English. So I accept that I am expected to speak English as well as everyone else.  Or rather (and this is where the problem begins), I should speak and write even better than U.S citizens—because I have to prove myself while they do not. If I make a spelling mistake in any given context, it’s because “I can’t really write in English.” In my experience, if my Anglo-American classmate makes a mistake, more often than not it’s a matter of negligence or circumstance. “It was late and the hardworking fellow was tired.” It’s easily forgiven.

I read the comments my creative writing professor carefully placed on the last page of my story.  One in particular made me think more deeply about what I believe to be the core of this attitude I’ve experienced toward foreign citizenship: “italicize foreign words,” the comment read. They’re not standardized enough.  Of course I understand my professor’s intentions. She/he wanted me and all the other students to be good writers, writers who could get published, and who would be understood. I needed guidance and was trying to figure out how things worked in this new country where I just landed. It all made sense. I did as my mentor told me. We both had good intentions.  However, eventually I felt that italicizing my words wouldn’t do the trick.  That’s not how I spoke, and I did not want to communicate with a voice that wasn’t mine. My tongue couldn’t be conquered.

Cultural and gender theorist Gloria Anzaldúa writes, “wild tongues can’t be tamed, they can only be cut out.” The process of cutting out someone’s tongue by forcing them to speak the dominant group’s language in a certain way is never gentle or painless. I was told that once your tongue is cut out, the acute pain in your throat when you try to speak up never goes away.

I still have my mother tongue.

As an emerging writer, I am still afraid to tell publications that I am from another country, because I fear they will find out that I don’t speak English like everybody else. Mind you that I don’t have a degree yet to certify my speaking skills. Another time, someone asked me how to pronounce my name on an internship interview.  I knew I wouldn’t get the job. Even my Social Security reminds me that I am an alien. This type of language signifies outlandishness, strangeness, and of course, alienation.

A teacher once censured Anzaldúa, “If you want to be American, speak ‘American.’ If you don’t like it, go back to Mexico where you belong.” Anzaldúa also writes that in college she was required to take speech classes to learn how to mask her accent — all Mexican-American students had to do this in order to graduate. This continues to happen to thousands of students who are now in the process of becoming tongueless.  I am repeatedly told that I have to change and adapt, and this is true. I volunteered to be here, so I’m the one who has to accommodate others. However, does that mean I’m supposed to accommodate intolerance? Should I merely do my part, even if it means not standing up against prejudice?

“Latinos” are not just “Hispanics.” We are Brazilians, Dominicans, Mexicans, Colombians, Argentines, Cubans, Puerto Ricans, Salvadorans, Peruvians, Nicaraguans, and from dozens of other countries from two separate continents, both of which are also called America. Not to mention the countless U.S.-born citizens who are Latin American descendants. We are diverse and complex.  We can all benefit from this kind of richness.

And many of my Euro-American friends also have names that are hard to pronounce, most of whom have families that immigrated to this country at one point in their lineage. However, they don’t feel marginalized like I do. They are part of a much larger group. And they are not part of the ghetto month in the American Literature survey in college, classes in which we study white American authors all semester — except for a few weeks that we reserve for African-American, Native-American, Latin-American, and Asian-American writers, those, apparently, are not American enough.

There’s a short story by Toni Morrison called “Recitatif” in which the reader is not told which character is white and which one is black, despite knowing of their biracial friendship. In a story about the nature of preconceived ideas and their consequences, this plays a role in making the reader empathize with both protagonists, and in showing that there’s no hugely significant difference in their experiences as Americans.  I see many issues related to racism, sexism, classism, and other similar -isms no different from how I see the problem of discrimination I face right now as a Brazilian international student.  All forms of marginalization are symptoms of the same cancer. Some voices get heard.  Others don’t.

Still, I’ve kept my tongue (so far).  I refuse to italicize words that are not foreign to me. E não hesito with my sharp tongue.  When sharing my story with some of my peers, they sometimes see me as the angry minority, or the whiner who can’t recognize how lucky I am to be in America. Believe me, I do recognize that. But I also know that this privilege does not serve the minority groups alone. Please, never forget that. 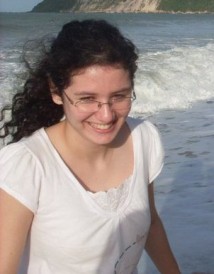 Originally from Natal, Brazil, Bruna Lobato studies literature, creative writing, and Latin American studies at Bennington College. She is a Fulbright scholar, and a Youth Ambassador of Brazil through the U.S. Department of State Bureau of Educational and Cultural Affairs. Previously, she was a Make a Difference Scholar at Green Mountain College, where she was the editor-in-chief of The Mountaineer and was awarded the Marsh Writing Prize. You can follow her on Twitter @brunadlobato.