Op Ed: Paternalism, Not Protection: A Feminist Reassessment of the Burqa and Niqab – The Feminist Wire

Home / Op-Ed / Op Ed: Paternalism, Not Protection: A Feminist Reassessment of the Burqa and Niqab

Op Ed: Paternalism, Not Protection: A Feminist Reassessment of the Burqa and Niqab

Yesterday, I opened a Facebook message from an old friend, touched that she was thinking of me after many years. But the feeling quickly turned to surprise as I read the words, “I’m thinking of wearing the niqab, so could you remove the photos of me on your page?”

Easily done. But as a moderate Muslim wary of extreme sides of the spectrum, I wanted to know more. So I typed back, asking for her reasons, pasting in a Quranic verse in expectation of her defense.

I was curious to know the reasons behind my erstwhile friend’s choice, particularly when the niqab in particular is not a religious requirement.

“The niqab is the proper hijab and jilbab,” she said, ending a long, rambling paragraph with a few barbs: “… Most people don’t know their religion and only follow the ways of those around them.”

Oh snap. That’s me put in my place!

Only, of course, it’s not. Her response had little in the way of specifics, and the argument was unsupported by any authority. I expected as much from a Facebook message.

Vagueness persists when considering the religious position of the burqa (the full-face covering and veil) and the niqab (its slightly freer sibling, where one’s eyes are shown). There is nothing in the Quran explicitly providing for a burqa or a niqab.

The root of discussion is this verse: “And tell the believing women to lower their gaze and be modest, and to display of their adornment only that which is apparent, and to draw their veils over their bosoms, and not to reveal their adornment…” (24:31)

What does apparent mean? And what’s an adornment? Schools of thought are divided on this issue – some scholars say that it means you cover your face and hands (i.e. a burqa), others interpret it more loosely, suggesting that you need to cover your ‘awrah’ (intimate parts) and possibly also your hair. Women are told to dress modestly, but there is much room for interpretation.

Each side of the argument supplements their view with extrinsic “authorities.” There is no definite provision for the burqa and niqab, which largely began as cultural imports from overseas – people simply following the ways of those around them. So why do women wear them?

I last wrote about the burqa three years ago, and while I cringe today at the superficiality of my arguments, I still stand by the idea that legislating against niqabs, burqas, and hijabs is the sort of government overreach that you read about in dystopian novels.

Many who choose to wear them speak of being empowered, and wanting to live their lives judged as people and not bodies. This is a fine goal, and women who make the choice (freely, without pressure, I hope you’re reading this, Taliban!) should be able to live as normally as possible, without encountering discrimination or the long arm of the law.

But some of the reasoning and power dynamics behind the niqab and burqa are sketchy and worrisome. Simply put, a woman veiling all of her body is putting the burden of avoiding the male gaze on herself entirely. You may feel in some way less sexual, but all you’re doing is serving entrenched patriarchal power structures

It is a one-sided concession to a rape culture that tells women to avoid streets at night and dress in a way that is not “asking for it” — without telling men to stop attacking women. The burqa and niqab, in a roundabout way, sexualize the female form as blatantly as a naked body supposedly does. By covering absolutely everything, a woman accepts her body as a wild, roaming sexual beast that needs to be neutered and wrapped up in case of attack.

Men ostensibly can’t control themselves, so it is the lot of women to do so. The aim to desexualise by way of complete concealment ultimately has the opposite effect – a woman in a burqa or a niqab submits to the mythical unrestrained male libido without challenging it.

Men and women are told in Islam to lower their gazes. So why are people putting responsibility on a woman to push the man’s gaze away?

The burqa and the niqab, more than anything, promote shame. A woman’s body is no longer hers, it is a danger and something to be parcelled away – a word often used is “protected.”

A burqa and a niqab protect a woman against attack as much as a sign saying: ‘Dear rapists, please don’t touch!’ Women and men of all shapes and colors and sizes are subjected to sexual offenses, because rape and other sexual violence is not about desire or “asking for it,” it is about power and domination.

It also misconstrues the realities of rape – rape by strangers accounts for only 13.8 per cent of the crime. You’re more likely to be attacked by an acquaintance than by a shady man ambushing you because of how “sexy” you look.

Either way, rape is more about subduing and exerting power over a helpless body – and a burqa or niqab doesn’t suddenly inure you from that.

There is more paternalism than protection involved here. A woman may wear the burqa and niqab and trumpet loudly that it is her “choice,” but for that to be true she must also consider the underlying reasons involved.

Islam tells men and women to lower their gazes, but women covering and restricting themselves fully take responsibility for this, without challenging the males who leer and terrify. They are almost complicit in shaming their own bodies into a submission to men that is out of Islam’s bounds. 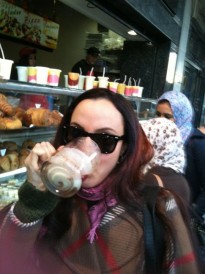 Aicha Marhfour is a writer currently based in Melbourne. She has had work published in Australia and abroad. Twitter: @aichamarhfour