Latinas in the United States are facing many of the same concerns regarding birthing and reproductive health care as our African-American sisters. As Latinas assimilate into American society, the threads that have kept us connected to our traditions are breaking quickly.

For example, Office of Minority Health research states that the infant mortality rate ranges from 4.8 per 1,000 live births for Central and South Americans to 7.3 per 1,000 live births for Puerto Ricans.  Puerto Rican Americans have a 30% higher infant mortality rate as compared to non-Latino Whites. The numbers for Puerto Rican women offer evidence of how assimilation can negatively affect health; strong cultural support for maternity and a healthy traditional diet often encourages Latina immigrants to take care of themselves with knowledge passed down through generations.  Latina mothers are almost twice as likely to begin prenatal care in the third trimester or not receive prenatal care at all, as compared to non-Latina white mothers.

Several factors are at play in health disparities, one of which is language. As my mother’s oldest child, I served as a makeshift interpreter at certain times to help facilitate communication between my mother’s Spanish and English. I witnessed micro-aggressions, especially in hospital situations. My blood would boil with rage and humiliation when the doctors or nurses would speak in an exaggeratedly loud voice to my mother. It was insulting. I could feel my mother shrink quietly in shame as I stopped short of starting an altercation.

I am alarmed by just the thought of similar behavior in a situation where an immigrant woman is giving birth in a hospital. Culturally, in my experience with my Dominican family, Latina women tend to be and are taught to be extremely conservative about their bodies. This conservatism is a mixture of generations of patriarchal indoctrination and a large dose of Catholic/Christian beliefs about women and their bodies. The dichotomy of women as both assertive and submissive was a dynamic I watched often, as I witnessed family and friends become a shell of their sassy and fierce selves in the presence of their husbands and other male figures of authority. It is as though the shame of being born a woman is engrained in their psyches. 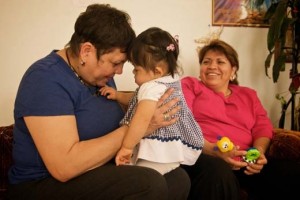 What does this mean for our reproductive health? We are not encouraged to learn about our bodies, are often left to figure out sex on our own, and are at risk for health problems in our current and future lives. Latina women’s bodies are just as vulnerable as African-American women in this country have been since the enslavement. The language barrier makes it routine for health care professionals to neglect their patients’ right to informed consent. The medicalization of birth and its transformation from a natural to a pathological event has increased the demand for medical students to have people on whom to practice procedures. Latinas are susceptible to experiencing Caesarean sections, episiotomies, forceps use, and being pumped with pitocin and epidurals, among other procedures.

I remember when a relative of mine gave birth a few years ago, I found out that she had an episiotomy and no one asked her anything about it. I nearly lost my mind. This is wrong. Doctors are cutting women and taking advantage of women enculturated to see them as their saviors.

Historically, I have reason to be up in arms about the reproductive health of Latinas. In the late 1930s, the United States funded private foundations and the Puerto Rican government in the sterilization of women as a way to control the population. Known as “La Operacion,” a bill legalized the sterilization of countless Puerto Rican women first on the island and later in the South Bronx, where much of the migrant population came to live. The operation is tubal ligation; that is to say, in plain English, cutting a woman’s fallopian tubes and rendering her infertile. Instead of offering comprehensive education on family planning, being operated was the only option given. There was no informed consent in that some women had no idea what exactly was being done to them. The backdrop to this was Operation Bootstrap, the heavy industrialization of Puerto Rico for foreign profit. Women worked in the factories, and maternity leave became an inconvenience. Essentially, a genocide was and is being carried out to decimate and control populations that, in large numbers, would pose a threat to imperialist and capitalist interests. A documentary released by Ana Maria Garcia has brought to light the injustice of the situation.

The stereotype that exists for Latina women and other women of the African Diaspora is that we are oversexed, and in the same breath, always pregnant. We are constantly bombarded with messages that we are doing something wrong and we should be ashamed for having so many children. Latino/as also have the highest uninsured rates of any group in the United States (from Latino Healthcare Forum). Lack of health insurance prevents many women from getting medical attention; sometimes this is influenced by their immigration status. Going to the doctor could mean deportation for people who are struggling to be legal citizens of the country.

Organizations such as the National Latina Institute for Reproductive Health have stepped up to address the intricacies of reproductive health, focusing on such issues as abortion access, advancing immigrant women’s rights, and ensuring contraceptive equity. There is movement and voices are rising to address and change the reality for Latina women in this country. As an Afro-Latina, studying to be a midwife is my form of taking my passion into direct action. Our stereotypical submissiveness and silence stands in the way of asserting our right to healthy birth outcomes. We have been led to believe that we are powerless and ignorant, and thus hand our bodies over to a system all too happy to experiment with them. We must pay attention so that both Latinas and other marginalized groups of women do not continue to fall through the cracks of our healthcare system. 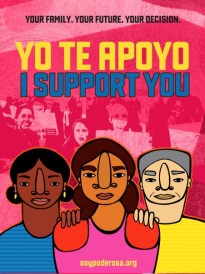 There are some ways this predicament can be addressed. My first recommendation is to increase the number of Latina healthcare providers. There is a clear need for more Latina and Spanish-speaking doulas and midwives. Reintroducing traditional and compassionate care to the Latino community would provide an alternative to Western medicine. Additionally, the retention of bilingual staff and training health care providers to be culturally competent is a key in transforming existing hospitals and clinics. Lack of insurance serves an obstacle to prenatal health, especially for immigrant and low-income Latinas. I would recommend that, with the help of organizations such as the Northern Manhattan Coalition for Immigrant Rights (NMCIR), we incorporate healthcare education and resources into other activist work. Another recommendation comes from the National Latina Institute for Reproductive Health policy brief concerning undocumented Latinas, Prenatal Care Access Among Immigrant Latinas. Increasing access to free clinics, expanding public funding for clinics that serve immigrant women, and training promotoras are strategies to turn the tide for Latinas.

Promotoras are community members who promote health in their own communities. They integrate information about health and the health care systems into the community’s culture, language, and value system, thus reducing many of the barriers to health services. One successful example is Promotoras Comuntarias in Los Angeles, California, through Planned Parenthood. Created to address the lack of access to reproductive health care and sexuality information in the Latino community, the promotoras go to schools, homes, and community centers to provide a 15-session program that covers not just reproductive health, but topics such as family communication, child abuse, alcohol and drug abuse, teen pregnancy prevention, and domestic violence.

Lastly, empowering women through all of these strategies is important. Being sensitive to cultural beliefs and practices of Latinas collectively, teaching women to assert themselves can aid in bridging the disparities. We need only to activate the resources and people already working for change so that more solutions can be developed and implemented. 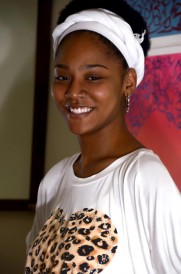 Ynanna Djehuty is an Afro-Dominicana born and raised in the Bronx. She is a writer, a certified birth doula, and a member of the International Center for Traditional Childbearing (ICTC). The focus of her work is the empowerment of women and people of the African Diaspora, specifically discussing the Afro-Latina Identity. She utilizes her experience as a birth doula to raise awareness of maternal and infant health for women, highlighting the disparities in the healthcare system in the United States for women of color. She is studying to become a midwife to continue to advocate for women and their overall well-being.

Related Itemsbirth violenceDominican RepublicHealthhealth disparitiesinfant mortalityMaternal healthpromotorasReproductionU.S.Women of color
← Previous Story Are Men to Be Trusted? Thoughts on Sexual Assault and the Chain of Command
Next Story → A Love Note to Black Mothers on Mother's Day