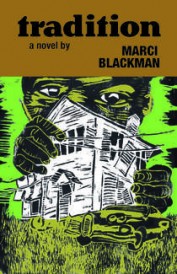 In the most brilliant crimes stories, the detective must travel, and hence guide the audience, from more familiar settings to enter hidden and hostile communities.  Sherlock Holmes leaves the humdrum armchair to investigate the Red-Headed League.  Easy Rawlins leaves his middle class home to dig into the seedy streets of 1940s South Central L.A.  Even Batman must drive into Gotham City from the outskirts of Wayne Manor.  Marci Blackman’s new novel, Tradition, out June 1st from Water Street Press, is no exception to this rule. As its jacket synopsis suggests, the novel shows one of its protagonists, Gus Weesfree, returning to his hometown after witnessing “a brutal crime” and discovering that “not all was as it seemed.” But Tradition is not the typical crime story and offers no singular guide into its world.  Instead, Blackman’s multilayered narrative allows Tradition to swallow us whole and, from the first pages, envelop us deep within the county line.

Tradition opens simply on a spring day in 2007 with Gus, the one-time promising academic of the Weesfree family, returning as an old man to a childhood home of Tradition, Ohio to find his old neighborhood overrun by bulldozers. While everything outside the house is quickly being demolished, everything inside the house is in slow decay: “the moldy loaf of bread hiding the stale box of baking soda,” the “[d]ust and paint chips from the ceiling sprinkl[ing] the stovetop,” Mabel’s alcohol-laced physical state, and, most importantly, the relationship between Gus, his sister, and the town itself.  As Tradition continues, cutting seamlessly between the first decade of the millennium and roughly twenty years surrounding World War II, we are introduced to an array of characters including the boldly named Finest Coon, a man misshapen and malformed from a hard birth and even harder life; and Belle, a woman who enters the Weesfrees’ lives with so many secrets she seems almost supernatural at times.

It is the intertwining of character and setting that makes Tradition such a captivating read.  From the controlled chaos of a large party in a small house, to the moisture in the seams of “torn…defecated on” clothing, to irritation of fresh, frequently “twitching” scars, to the almost ten pages dedicated to slaughtering a sow (bacon lovers, you have been warned) Blackman’s descriptive powers embed us not only in the town of Tradition, but also in the complex psychologies of its residents, and the character of the town itself.

Through Blackman’s use of multiple protagonists and nonlinear structure, Tradition becomes an emblem and an exploration of the paradox “the more things change, the more things stay the same.”  While there are specific chronological references throughout the book – the image of unused war rationing coupons, the George W. Bush pronunciation of “I-raq,” and the allusion to a certain up-and-coming writer named Richard Wright –Tradition invites us to look at themes that run throughout the 20th and 21st centuries—themes we’re perhaps more accustomed to seeing with one eye shut:  gentrification, euthanasia, child abuse, spousal abuse, disabled abuse, veteran abuse, police brutality, and the marginalization of communities that don’t fit in the neatly drawn, socio-politically-imposed lines of race, gender, and sexuality norms.

This multiplicity is the true strength of the novel. Through engaging prose and engrossing narrative, Tradition, serves to counter American mythologies propagated by many politicians and subtly supported in much mainstream media. In the process, Blackman reveals that issues of integration run deeper than street borders, that the LGBTQA community and all its complexities existed long before the acronym, and that not everyone was for “the Good War.”

Ultimately, Blackman exchanges the trope of the singular super sleuth for a kaleidoscope of characters and allows us to explore Tradition—both the town and the concept–freely. She paints a community comprised of the Greatest Generation we don’t see, the ones that don’t make it into the romanticized campaign speech or the feel-good-movie-of-the-week.  It is the country of our grandparents; it is the country in which we live.  In the opening epitaph, Blackman reminds us that “tradition” is defined by Webster’s Third International Dictionary as “the force exerted by the past up the present.”  But Blackman’s new novel expands this definition’s logic, compelling us to ask ourselves: What are we passing down?  What are we giving up? 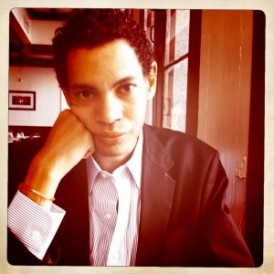 Quincy Scott Jones’ work has appeared in such anthologies as Heroics: Strange Tales of Absurd Superheroes, From Where We Sit: BlackWriters Write Black Youth and Let Loose on the World: Celebrating Amiri Baraka at 75.   With Nina Sharma Jones he co-created the Nor’easter Exchange:  a multicultural, multi-city reading series.   His first book, The T-Bone Series, was published by Whirlwind Press in 2009.