COLLEGE FEMINISMS: A Seemingly Crazy, Yet Sincere Call for a Bra-less Revolution – The Feminist Wire

COLLEGE FEMINISMS: A Seemingly Crazy, Yet Sincere Call for a Bra-less Revolution

Bill Cosby knows that kids say the darndest things. Lying by the pool yesterday, I overheard my little brother tell my rather corpulent uncle he had huge boobies, what some have coined as “moobs” (man boobs). After wiping my tears of laughter, I began to think more closely about gender implications imbued through the wires holding bras and bathing suit tops together. What makes the difference between my uncle’s moobs and mine, besides the fact his may be a few cup sizes larger?

Before I go any further, I would like to add an important disclaimer—I am not a hormonal teenager looking for quicker access to second base, rather a young woman seeking emancipation of a sort. I question why it is the social convention to cover breasts in informal scenarios where men can reign shirtless. And on a less radical level, why is not wearing a bra deemed inappropriate? Before dismissing the question completely, as it may at first sound ridiculous, I ask you to separate yourself from cultural norms and consider the questions posed in this article — in order to understand the implications behind something so widely accepted.

Fact: Both men and women have areolas and nipples. Not the most enlightening fact, but one that is crucial to the core of my argument. Disregarding the existence of “moobs,” are the inches of fat beneath a woman’s areola what need to be hidden away? Last time I checked, an overwhelming amount of American citizens are no stranger to fat; a whopping whopper-eating two-thirds of American adults are overweight or obese. The cow reigns sacred in India and its nutrient-rich milk is an integral part of the diets of billions worldwide. Maybe breasts are revered as highly as those utters of a sacred cow, due to their milk-producing abilities? If so, I’ll clarify that personally, I would prefer reverence in the form of overt celebration instead of protection, suppression, or whatever you want to call it. And if it is solely an issue of repression, then it’s definitely time to break free my friends.

I am not encouraging a nudist society; I don’t as openly question the need to cover either sex’s genitals, partially because both the penis and vagina are repressed from public view. Rather I want to equalize opportunities, and call me selfish, but I am also very interested in increasing my own comfort levels. I can attest to the seemingly ordinary, yet universally orgasmic feeling from un-strapping my bra. Yet I always feel compelled to quickly run to put a bra on when someone knocks on my door. I don’t run to put on make-up or heels, as these are less of a sanction for Western femininity, whereas bras are a requisite. There is the common notion that bras provide support, but as a woman on the less endowed side, at least I can wholeheartedly confirm that it bothers more than it helps. For those who prefer the support, that’s perfectly fine too; I’m not here to create more restrictions. But wouldn’t it be nice to have the damn option? Maybe you’ll be convinced once you read about a French study conducted in 2003, where 33 women who practiced a range of sports went a year without a bra, and 88% reported increased comfort and their breasts were firmer and more elevated. Dr. Laetitia Pierrot confirmed these results, repeating this study in 2006 with 250 women.

Next, admittedly cliché, fun facts: Beauty is subjective, and culture is relative. One glaring example comes to mind: Among the Kung of Botswana, small penises are culturally desirable, whereas large ones are perceived as grotesque and disgusting. American society as a whole does not further this notion; likewise, we do not have to submit to the popular idea that perky breasts are best. Considering tribal topless women, or the more common braless European women, the restriction is hugely cultural. My concern does not stem from the fact that I’d prefer an even tan rather than two triangles on my chest…or maybe it does a little. It’s America’s damn puritanical beginnings that are responsible for my uneven tan. What a liberating feeling it was to untie my bathing suit top for the first time in Barcelona, and what a wonder that the comfort could so easily escape me as soon as I crossed the Atlantic ocean.

I strongly feel this is an empowerment issue, relating to self-esteem and self-image, or rather projected constructions of what is acceptable. We feed off breasts as babies, and as adolescents learn to cover them up, hide them, make like Adam and Eve after they ate the forbidden fruit. Should something so many children, boys and girls alike, thrive on to survive as newborns, be covered up in scenarios where men’s are visible? I remember being able to take off my bathing suit as a young child and feel no shame.  But at some point I outgrew training bras and grew embarrassed of my body. There was a distinct point in time where I stopped feeling comfortable changing in front of my own sisters. Is my discomfort at the idea of joining friends for dinner clearly braless an unfortunate self-inflicting pain? If all women in a class attended a lecture without bras, would it be too distracting, or compromise the students’ learning abilities? Am I wrong to assume most women would also be reluctant to partake in such a liberating physical comfort? Do excuse me if this is not the case.

I would like to advocate embracing breasts in a natural state, regardless if they sag, bounce, or appear unpronounced. Who decided it would be socially unacceptable for the shape of a woman’s nipples to show beneath a shirt? It’s nothing men haven’t also experienced in the cold or state of arousal. Is there an exception for women since they are more openly sexualized, and why should this double standard hold true? If others cannot keep their heads clear (or down), why should women carry what I perceive as a burden?

I sit at my computer more than ever conscious of my strapless silky bra, creating indentures in my skin. Do these ideas cross a line of appropriateness? Should I hesitate to share these ideas with my friends, or one of my professors? Is this all together crazy or embarrassing? And for any critics who would be quick to say yes, I’d like to ask why this is the case given that it is a relevant issue to possibly you, your girlfriend, sister, daughter, or mailwoman. Ask any of them if they have reveled in the feeling of taking their bra off; I double-D dare you. While you’re at it, take yourself back in time to the 1800s and imagine if you would also ridicule those first women who dared to wear bloomers. I know my concerns may elicit laughter from discomfort or raise some disapproving eyebrows; imagining the possibility may also raise other body parts, but is that a bad thing?

Or you know, maybe my bra’s a little too tight; what do you think? 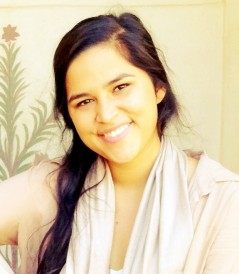 Elvia Lopez is a UCLA undergraduate involved in UCLA Sex Squad, where she uses humor and personal narrative to perform sexual health education for LAUSD 9th graders. She has volunteered in India and Costa Rica and has traveled alone throughout Spain, Portugal, Denmark, Germany, France, and Italy, interacting with Parisian artists, Portuguese taxi drivers, professors, and other students to gain deeper understanding of culture and social constructions. She possesses a hyperawareness to gender, class, and racial issues and an inextinguishable, fiery tongue. Focused on amplifying the reverberations of her voice, as well as those deemed incapable of speaking or protesting, she dreams of shedding light upon unspoken lived realities.