COLLEGE FEMINISMS: On Using the 'F' Word as a Queer WOC – The Feminist Wire

Home / Academia / COLLEGE FEMINISMS: On Using the 'F' Word as a Queer WOC

COLLEGE FEMINISMS: On Using the 'F' Word as a Queer WOC

The other day I was watching student presentations in my African American Women’s History class. One of the students’ research, which focused on objectification of women in mainstream hip-hop, stressed that the word “bitch” was wrong and oppressive in every single context that we use it in today. OK…I mean, but what about Bitch Magazine? And what about the ways that some women reclaim the term “bitch”?

The student went on to give an alternative perspective about Tupac’s opinions of women.  She stated,

Now I know that some people, like feminists, say that Tupac shouldn’t speak for women because he’s a man, but I still think he’s right—and it is just more classy to use other terms like ‘ladies’.

There was a breakout of quiet commentary from a good half of our ten-student class. I heard my peers—mostly women of color—mutter about how they don’t call themselves feminist because of controversies like supposed allegations against Tupac’s morals.

I was so stunned. Was that how they really saw feminism? Was it this black and white?  Would they see me as a hate-rallying asshole for calling myself a feminist and recognizing the need for women to have their own voices? And lastly, what’s with that whole “classy” deal?

I wanted to speak up.

In most cases, I would have, even though it usually ends with somebody telling me I’m freakishly opinionated and that they “disagree” with my experiences or feelings. (How does that make sense, seriously?) I didn’t.  I remembered being there.  I used to cradle concepts like Christ and the Ten Commandments, and I get the power of patriarchal norms for women like being “classy” and “ladylike.”  But then I discovered mainstream white feminism, and how the aforementioned can be oppressive.

I loved following body-beauty blogs, and I remember getting embarrassingly stoked about events like Slut Walk, mainly organized by and composed of white, middle-class cisgender women.  Feminism became my Bible, even though it never had any intention of including a narrative like mine.

I’m queer, Asian-American, my family is low-income, and I use gender neutral pronouns. I write poetry and spit spoken word at open mics because my voice is important. I engage others in dialogue about Asian fetishization, ableism, and dragon ladies.

The truth of it is, I didn’t march in Slut Walk, and trite statements like “Your body is beautiful no matter what you say,” are no longer my mantra.  My feminism is evolving.  Today it’s more nuanced.  For me, feminism is a story.  It’s multiple stories.  It’s my mother leaving my abusive father and moving back to her homeland, where she works three jobs to provide for my younger sister and send the college textbook money and living expenses that my dad won’t pay for.  It’s European-featured Barbie dolls made in Taiwan, disassembling class privilege as part of the discussion around girl-on-girl hate, and not seeing low-income women of color as inherently “trashy sluts.” It’s Queen Latifah’s U.N.I.T.Y., solidarity, and responsible allyship among people of all genders. And while feminism is not a one-size-fits-all narrative, it’s neither white nor simply black and white, and neither is it a bad word to claim.  Feminism is nuanced unfolding story-lines that center upon women’s lives, rights, voices, desires, right to naming, etc. Maybe one day my classmates will see that, too. 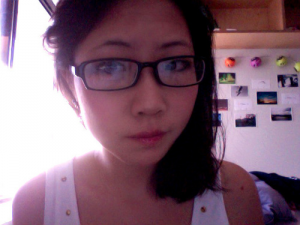 Claudia Chen is a first-year Communications and Rhetorical Studies major at Syracuse University. Claudia is Public Relations Chair for Asian Students in America (ASIA), the sole pan-Asian student organization on campus, and currently interns for ImMEDIAte Justice, a Los Angeles based organization aiming to empower young women to share their experience of reproductive justice through film. Claudia facilitated regional and statewide workshops with Gay-Straight Alliance Network for the past three years, and has been a guest speaker on the Dr. Phil show, various banquets, the 2011 API Equality LA Crossroads Symposium, as well as for Nickelodeon star Avan Jogia’s Straight But Not Narrow campaign.