Find the Good in Women Who Aren't Margaret Thatcher

“She must have been miserable,” one of my Facebook “friends” wrote as a kind of eulogy for Margaret Thatcher. I had to disagree. Margaret Thatcher, before she began to suffer from dementia, had, in every recorded moment of her political career (as well as her writing after that career was over) the same joy as Pat Buchanan has in his television appearances: the both of them completely certain of their completely wrong beliefs, energized and eager to shout down anyone who dared to disagree. Only the most skilled actors can fake that kind of relish and confidence, and for Thatcher, with her false “posh” accent and her unconvincing, heavily coached body language (as one comedian pointed out, she tilted her head one way and then another in an attempt to make herself seem as if she were listening to and considering the opinions of her rivals), acting was never her strong suit. 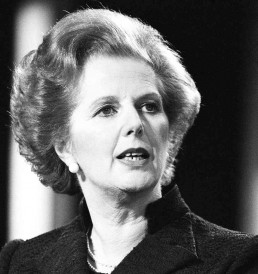 I lived in London for the last half of 1983, and although Thatcher had just won her first reelection bid (and would rule for another seven years) she was despised in every social circle that touched my life– by people who would never dream of grouping themselves together under other circumstances. From the wealthy, titled, racist family I worked for (Labour supporters in spite of themselves, though the stay-at-home son had made an aborted run for parliament as a Liberal that year) to every punk and post-punk British musician whose concerts I attended on my nights off: the contempt for Thatcher seemed to permeate the whole city like the scent of damp chalk.

I don’t have the numbers in front of me, but I suspect Margaret Thatcher is the person in human history whose death was most often–and in explicit terms–wished for in popular song. So many great musicians have written anti-Thatcher songs that the ones who are still around could put on a daylong concert together, an all-star affair (well, stars of a certain era). And then do another the same time next year.

Most hatred directed toward women politicians is, at its core, misogyny. If Thatcher had been “Martin” instead of “Margaret,” his hairstyle and clothing would have come under less scrutiny, his nickname would never have been “The Iron Gentleman,” and no one would have called him a “witch” or “bitch”–though they still would have called him a “cunt” because in British vernacular, when used to describe a person, “cunt” is a gender-neutral term. But his government’s policies would have brought about the same deep and lasting damage: British people would have hated “Marty” the same way they hated “Maggie.”

The animosity toward Ronald “Ronnie” Reagan in the U.S. was also bitter and well-earned: when the announcement came that Reagan was suffering from Alzheimer’s, the HIV-positive host of a local LGBT radio show said, “On the cosmic scale of retribution, that diagnosis isn’t even close. He forgets he has it.”

But Reagan did, in his wooden, washed-up-matinee-idol way, portray himself as a sunny, friendly figure, appealing to a wide variety  of Amercians (minus anyone who was poor, queer, or not white). “It’s morning in America,” Reagan’s 1984 reelection campaign trumpeted– and he won by a landslide. The fact that he seemed a little… absent while he was still in office, years before his diagnosis became public, made his death less of an occasion for cake and champagne.

Thatcher’s persona was one of someone who knew exactly what she was doing: “the right thing,” but for people who were too stupid to know what was good for them. It was “mourning” never “morning” in Thatcher’s Britain. People who celebrate Thatcher’s death are simply reciprocating the disdain she showed for her own citizenry. 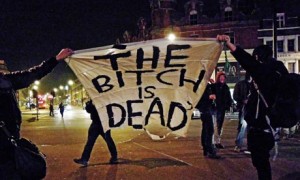 Her policies devastated the lives of so many British people that she was still a presence in the decades after she was forced out of office, bobbing up like a long-submerged corpse from a river bed. Nearly ten years after I’d lived in London, when we were both in a city thousands of miles away, a friend mentioned to me that his father had lost his livelihood during the failed miners’ strike  which started soon after I left England and lasted 51 weeks. Before the strike’s end I heard many times, on college radio, a British post-punk song which included a spoken intro from a union leader. He said if the miners didn’t win, the rest of the unions would lose too. Today, union membership (for every profession) across Britain is half what it was when Thatcher took office.

The tendency to mischaracterize Thatcher is part of a larger trend in which progressives try to soothe themselves by imagining that the right, in spite of their many victories in elections and policy decisions, are, at heart, tortured souls. “They’re probably very unhappy people,” we say. We want our conservative foes to have sleepless nights, a dread of facing the bathroom mirror in the morning and when they finally do, we want them to burst into tears and begin a slow downward slide against the tiled wall, the way characters in movies behave after they do horrible things.

Most progressives haven’t cut benefits to seniors, children, and the disabled, haven’t written homophobia into law,  nor have we supported dictators in the slaughter of their own people. Still, even those of us who fight against these and similar measures struggle with self-doubt and feelings of worthlessness. We anguish, in the company of friends and therapists, over our small everyday failings. Of course we think the people who have commited great wrongs should struggle more than we do. But I haven’t found much, if any, conflict in the right-wing bigots I’ve known.

At least two of my uncles were on the wrong side (the racist one) of busing in South Boston in the 1970s. The “Kiss Me I’m Irish” buttons and other green St. Patrick’s Day parade paraphernalia they bought for all the nieces and nephews every year came from a cart with a sign saying all profits went to the neighborhood “anti-busing” hate group. My uncles were good friends with one of the most notoriously homophobic, racist, and misogynistic city councillors in my town’s history: the week after I’d been to a protest against that guy, I saw him at my cousin’s wedding reception. My right-wing uncles were also cheerful people, fun and good company. I haven’t been in touch with them in years, but I would wager that neither of them has lost a moment’s sleep over the racist or sexist things they’ve thought, said, or done. But I wouldn’t say their wives were especially happy women. 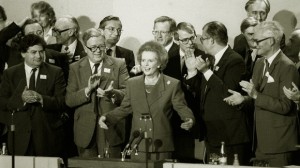 As has been pointed out elsewhere, the attempts to laud Thatcher in death as a feminist groundbreaker are outrageous, considering her record.  Trying to portray Thatcher as a success in the push for women’s rights is also sexist: no man who showed as much contempt for women in general and feminism in particular would find himself posthumously labeled a feminist superhero. The was-she-or-wasn’t-she argument is itself a distraction from Thatcher’s legacy. Even the discussion on the “no” side implies the main problem with Thatcher was: she never mentored other women to take her place in government! Debating whether Thatcher was a feminist is as pointless as debating whether Hosni Mubarak should have had more diversity in his cabinet.

Instead of denouncing Thatcher for her policies, feminists have spent more time this past week denouncing each other, for greeting her death in a less than respectful manner or for disagreeing with knee-jerk assumptions about Thatcher like, “She must have been miserable.”  This pattern is an old one detailed in Susan Faludi’s recent New Yorker portrait of a true feminist groundbreaker, Shulamith Firestone, “the epicenter of the radical-feminist movement” as well as the author of bestselling The Dialectic of Sex: The Case for Feminist Revolution. The article chronicles how Firestone and many other feminist founders of the 1960s and early 70s were torn down and “trashed” by their fellow “sisters” in the movement and eventually forced out of the groups and collectives they started– over disagreements that seem arcane and niggling forty-odd-years later. Those second-wave feminists vilified each other while the world unraveled around them. Perhaps now would be a good time to resist repeating that mistake, and instead try to find the good in women who aren’t Margaret Thatcher. 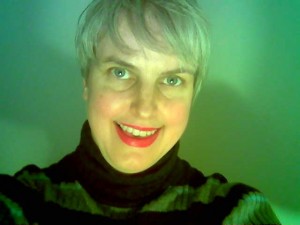 Ren Jender (@renjender) is a Boston-based writer, performer, and producer. She is currently working on Ten Tiny Films, a micro-filmmaking project with nine other queer women and gender-nonconforming writer/performers. For eight and a half years, she was the host/founder of and a regular writer-performer in The Amazon Slam, an all-woman poetry slam that won accolades from The Boston Phoenix and Boston Magazine. Her work has appeared in Bitch Magazine, Bay Windows, Spare Change, and most recently xoJane. She occasionally projects “radical” phrases on the sides of buildings.

Related ItemsMargaret ThatcherPoliticsWorld
← Previous Story Western Novelist Paints a Racy Portrait of Middle Eastern Women in "Stoning the Devil"
Next Story → Marriage Equality and Beyond: A View from India