On August 23, 2012, the George Washington University’s independent student newspaper, The GW Hatchet, reported that rising senior Tori Guy was transferring.  Her father had lost his job, and Guy, relying on financial aid for 60% of her tuition, could not pay.  According to the Hatchet article, Guy requested emergency funds from the University, but was denied.  Guy decided to leave GW and enroll in Cleveland State University, near her home.  The process left her with $20,000 of debt.  She had been elected president of the Black Student Union just the semester before.  When questioned by The Hatchet on how she felt toward the University after choosing to transfer, Guy stated,

I really appreciate all the University has done and how they tried to accommodate my family being in debt to them. A college is a business…I understand that.[1]

Many may read about Guy’s situation and feel shocked, or outraged, or despaired, or…something.  For those with the memory or education in the history of racism in the United States, seeing an article about a Black woman—a leader of an organization for Black students, no less—forced out of an elite educational institution for financial reasons may cut extra deep.  But there is an odd caesura between that affective response and Guy’s declaration of understanding.

I really appreciate all the University has done…A college is a business…I understand that.

To truly understand, Guy must not simply observe structures of debt and the coercion that is its root.  She must appreciate it, as if the University has shown some sort of benevolence.

Feminists, especially those feminists involved in creating, facilitating, and learning from women’s, gender, and sexuality studies programs, know this story all too well, because we have pointed out the futility and the violence of appreciating such so-called benevolence.  We have studied how the marginalized—one might call them “feminized”—must appear to labor dutifully in support of the very systems that oppress them.  Sara Ahmed, using the happy housewife as a point of departure, writes that “a duty can function as a debt, a way of returning what is owed.”[2]  Tori Guy got the complete deal—the duty, the debt, and the duty-as-debt.  We are, if you will, partly indebted to feminist and queer theory, especially the critical traditions of feminist-and queer-of-color critiques, for illuminating us to this cycle, and to women’s, gender, and sexuality studies programs for helping facilitate the spread of these illuminations.

Yet women’s, gender, and sexuality studies cannot be divorced from the economic context in which these programs are being presently produced—neoliberalism, and its educational institution, the corporate university.  Neoliberalism as both economic and cultural ideology results in Robert McRuer’s description of how such market-privileging processes shape the output of the corporate university: “on one side, the flexible body of the contingent, replaceable instructor; on the other, the flexible body of the student dutifully mastering marketable skills and producing clear, orderly, efficient prose.”[3]  Flexible instructors and flexible students, dependent upon the corporate university for a wage and a future, are those whose labors and bodies stretch to satisfy the requirements that would make them valued members of the university’s community, less at-risk to a budget cut here or a rise in tuition there.  Flexibility means that when the corporate university applies such pressures, instructors and students will bend as much as they can so that they will not snap.  Sure, I can teach another class for minimal pay.  Sure, I will work freshman orientation in return for free housing.  Sure, I will go into debt.

Student and professor flexibility correlates to the kinds of labors that subjects of neoliberalism are able to perform, and is thus related to the types and rates of values outputted by such labors and extracted by capital.  If the University is invested in the value it can extract from student and professorial labors—labors like research, presentation, publishing, marketing—it is of the highest importance for university capital to create the conditions for its own reproduction and further accumulation.  Flexibility at the university level aids in increasing the rate of profit for capital at the university level, increasing unpaid labor-time and thus accumulated surplus-value.[4]

What is the relationship of the corporate university to women’s, gender, and sexuality studies programs?  Flexibility is a key connection.  At GW, for example, much of the teaching labor in women’s studies or women’s studies-affiliated classes is performed by adjunct professors.[5]  These professors throughout the University are underpaid, overworked, and their victories are small and few.[6]  Students, meanwhile, are encouraged to “take advantage” of capital-enforced interdisciplinarity and pick up another major here, and another minor there, performing prestige-boosting academic labor.  (Can we imagine the perplexed looks on our family and friends’ faces when they find out that we only studied that arcane subject?)  Capital accumulates while the positions of workers at the University, and indeed of women’s studies and sexuality studies, become more and more precarious, more vulnerable to elimination and certainly to immiseration.  And if you cannot keep up, have no fear—just be flexible.  You can always transfer.

We in women’s, gender, and sexuality studies know how feminist knowledges and curricula are devalued.  We know that our subject areas have the extra burden of being declared already-useless, already-dead weight.[7]  It would be naïve to believe that the history of our departments and programs—whether they are separate or combined—is simply the history of interdepartmental contention, or of feminist and queer conversations in general.  These conversations demarcate a history of departmental territorialities and the messiness of identity politics, as well as the sorts of praxes and epistemologies that inhabit the historical present in feminist, racial, queer, disabled, postcolonial, transnational imaginaries.  However, “its history is also a history of capital,”[8] and this history denotes the fact that the value extracted from academic labor lies directly within the chain of globalized, neoliberal exploitation of marginalized people here in the United States and in the Third World.[9]

Yet we are not content to remain cogs in the machine of a world order that has cruelly and deliberately forgotten so many.  We are also not content to let our different labors, be they labors of teaching, learning, cleaning, organizing, remembering, caring (all of these labors of so-called “women’s work”) be used to prop up such an order as if it were a duty.  Women’s, gender, and sexuality studies can strike at the corporate university, and at neoliberalism, because they are loci of value-production and because the fields welcome (and we must work to make sure that the welcoming is affirmative and continuous) contention, diversity, and solidarity, as opposed to neoliberalism’s disciplinary obedience, sameness, and competition.  It is our job, as feminists in the corporate university in and around these programs, to make sure that the corporate university and neoliberalism are abolished, and to re-imagine a social sphere that suits our demands for a better world and “basic human needs right now right here everywhere,”[10] duty-free.

[5] According to the faculty listing on the GW women’s studies website, nine out of the 46 faculty, or around 20%, members appointed in or affiliated with women’s studies are part-time professors or lecturers.  This is not unique to women’s studies (or reflects other rising adjunct levels around the country), but ironically underscores a way that University capital layers flexibility on top of a department that would have an interest in studying such flexibility as feminization of labor. (Accessed August 31, 2012.  See the listing at http://programs.columbian.gwu.edu/womensstudies/faculty/.)

[7] “Everything has always already been taken.  That is the meaning of dispossession.”  Anthony Paul Farley, “Critical Race Theory and Marxism: Temporal Power,” Columbia Journal of Race and Law 1 (Issue 3): 262.

[8] “Communiqué from an Absent Future,” http://wewanteverything.wordpress.com/2009/09/24/communique-from-an-absent-future/. 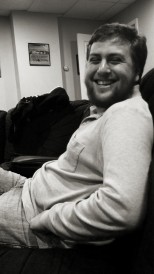 Paul Seltzer is a senior majoring in Women’s Studies at The George Washington University in Washington, DC. He hopes he will be accepted into graduate school, but the future is precarious and contingent. Contact him at pseltzer@gwu.edu.