Peeking "Behind the Kitchen Door": The Struggle for Food Justice in America's Restaurant Industry – The Feminist Wire

Home / Economy / Peeking "Behind the Kitchen Door": The Struggle for Food Justice in America's Restaurant Industry

Peeking "Behind the Kitchen Door": The Struggle for Food Justice in America's Restaurant Industry

Last month, Michelle Obama visited a Springfield, Illinois, Wal-Mart to celebrate and highlight its efforts to help Americans eat healthier.  Mrs. Obama announced, “For years, the conventional wisdom said healthy products just didn’t sell. Thanks to Wal-Mart and other companies, we’re proving the conventional wisdom wrong.” If only this neoliberal logic delivered as promised.  As with Michael Bloomberg’s Cola Crusade, the narrow focus on food choices, individual behavior (“Get Fit”), and healthy lifestyles obscures the structural inequalities that contribute to health inequity.

While Wal-Mart MAY led to great access to organic foods or fresh fruits and vegetables in some communities, it also contributes to the very conditions that make “healthy living” difficult.  Stacy Mitchell notes the deleterious impact of Wal-Mart and other members of the food industry’s 1%:

The real effect of Walmart’s takeover of our food system has been to intensify the rural and urban poverty that drives unhealthy food choices.  Poverty has a strong negative effect on diet …. Walmart has made it harder for farmers and food workers to earn a living. Its rapid rise as a grocer triggered a wave of mergers among food companies, which, by combining forces, hoped to become big enough to supply Walmart without getting crushed in the process.

The fight over injustice is not limited to these mega companies. The destructive impact the food industry has on the health and well-being of people across this country (and beyond) extends beyond the fields and super markets. It is most certainly evident in the treatment of restaurant workers.

In a new book entitled Beyond the Kitchen Door, Saru Jayaraman highlights the harmful impact of the restaurant industry on the health, economic security, and lives of those who cook, serve, and provide for US. Jayarman paints a picture of a restaurant world defined by exploitation, mistreatment, and abuse.  It is a world not simply of delicious foods and celebrity chefs, but of workers, moms and dads, scraping by just to make ends meet.

Saru Jayarman pulls the curtain back on restaurant work, highlighting the struggles endured on the dining room floor.  Far from the glamorous world of Top Chef or the joys of being a foodie, restaurant work is both hard and poorly compensated.  As of 2013, federal minimum wage for tipped workers is $2.13 an hour.  When tips don’t net the mandated $7.25 (current federal minimum wage), restaurants are supposed to make up the difference.  Not shockingly, this doesn’t happen in many cases.  Thirteen percent of restaurant workers report managers stealing their tips.  Others note how restaurant supervisors require them to report larger tip counts to create the illusion of an earned minimum wage.  Jayarman tells the story of Claudia, a server at a pancake restaurant in Texas.  Enduring racism from customers, she also did not receive sufficient tips on many occasions (one has to wonder how racism, sexism, and homophobia impact tips).  The combination of her tip count and her wage left her income under the federally mandated amount.  Instead of making up the difference, a manager told her, “If you don’t make enough tips to make up the difference, you have to report that you made the money anyway.”  In other words, her poverty wages were often way below poverty level.

In another instance, one of Claudia’s tables walked out on their bill of $98 dollars.  “She told me that it was my fault, and that I’d have to pay the bill.  I had made $80 dollars in tops that night,” noted Claudia.  “So after tipping out the bussers and the dishwater, the manager tool all my tips and told me I still owed the restaurant $18.  I had worked from 10:00 PM until 9:00 AM – though I clocked out at 7 AM – and instead of paying me anything, they were telling me I had to pay them.” It is no wonder that 80% of food service workers do not earn a livable wage; of the few that do earn a living wage, a large portion are white men who work at upscale restaurants. This is the American Dream; this is American poverty; this is restaurant work.  These men and women are the 47%, the “takers,” who despite serving the 1%, alongside the rest of us, get little in return but grief, mistreatment, and disrespect.

As with every American institution, race matters.  Restaurants are immensely segregated: by location, by job, by placement on the floor, by wage, and by clientele.  Servers, bartenders, and hosts are white, while runners, bussers, those in the back of the house, and those who make the lowest wages are overwhelming people of color.  Of those who have reported earning less than minim wage, 96% are people of color.  Workers of color experience racism and microaggressions; they are more likely to be questioned as to their qualifications.  It is a world where irrespective of diversity, in terms of both staff and food choices, racism remains a constant on every menu.  According to Jayarman, “We tend not to realize that diversity is not the same as equity – that simply seeing a lot of restaurant workers from different backgrounds have equal opportunities to advance to jobs that will allow them support themselves and their families.” 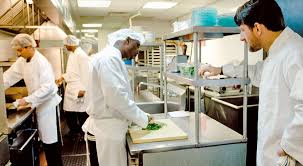 The restaurant industry is also rife with sexism – women earn 85 cents on the dollar compared to their male counterparts.  Women are also relegated to the lowest-paying jobs with the worst chances of upward mobility.  Women are subjected to rampant sexual harassment.  Although only 7% of the nations workers can be found in restaurants, in 2011 they accounted for 37% of the sexual harassment complaints to the EEOC.  The relative silence about these abuses and horrid conditions is telling.  We all frequent restaurants yet our interactions, our complicity, and our focus on pleasure over people perpetuates a cycle where exploitation and abuse remain in the shadows. 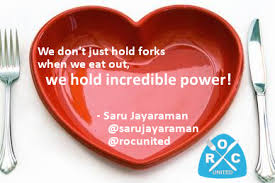 Food justice and ongoing fights around the food industry will be central to the struggle for justice and equity well into the twenty-first century.  From Monsanto to food deserts, from the working conditions of those who work within a myriad of food industries to food insecurity, from fast food to 4-star restaurants, the intersections of race, class, gender, and nation are mapped onto these struggles over food. Underemployment, health inequalities and exploitation are not only evident at the beginning of the food chain, but at every step, including the ultimate delivery to a dinner table near you. Those fights must challenge the hegemony of Monsanto and Wal-Mart, Inc. alongside the demands for justice within America’s restaurant industry.