His 26 year old body was calculating comfortable, sprawled over a disheveled collection of towels and sheets constituting a makeshift mattress, littered with blood-tinged gauze pads, a towel soiled with oral secretions and a crusty suction tube. Upon seeing me enter the room, his weary eyes shifted from his digital tablet in my direction and flashed the brightest beams they could muster to engage with me.  After all, this was his primary care doctor coming to see him.

On his scalp sat a tattered blue knit skull cap that was losing the battle to keep the curly strands of his unruly hair from peeking out from behind his ear; a bold announcement that he hadn’t had a fresh haircut in the three weeks since the car accident.  His lips were dry and cracked, concealing gleaming silver wires that were holding his fractured mandible together for one more day but rendered him unable to speak.  Just below his chin, squarely placed in the center of his neck was a larger V-shaped gauze pad that covered the crater of a recently removed tracheostomy tube – a stark reminder of his connection to a breathing machine that had been keeping him alive just days earlier.  He coughed deeply, the mucus sputtering from behind the conspicuous hole in his neck like an old vintage car trying desperately to get started.

“How are you feeling?” I asked, sitting on the bed next to him as he labored to join me and sit upright.

He motioned with his hand that he was ok and started typing, apparently not in the mood for prolonged greetings and pleasantries.

His fingers slid across the tablet in deliberate and painstaking fashion, correcting the numerous mistakes made as they tried in a futile effort to keep pace with the flurry of thoughts emerging from his brain.

“No. She’s been here every day, but just flew home yesterday.  I need you to tell her I’m POZ.”

By “POZ” I knew he was referring to being HIV positive; I had never been asked to disclose a patient’s HIV status to his family before, but obviously there was a first time for everything.  As physicians we are usually taught to staunchly honor confidentiality when it comes to disclosure of our HIV-positive patients’ status, particularly when family members or loved ones inquire during a hospital admission or clinic visit.  The spoken rule is usually that unless a patient tells you it is ok to disclose their status to someone, you are to keep it to yourself, even when loved ones ask you directly.  The only exception to this rule is when a patient may be involved in a sexual relationship with someone, refuses to tell them they are HIV-positive, and may be putting this partner at risk.  But this situation was different, and he had been through so much that I desired to be as helpful to his healing process as I could, whatever that would entail. During the four years I had helped him manage his HIV, we had never discussed to whom and how he disclosed his HIV status to people in his life.  I had also overlooked what a brilliant organist and singer he was for his church, and the shroud of secrecy around his HIV status he must’ve felt compelled to cloak himself with to avoid any stigma or discrimination. His resiliency through all this washed over me, flooding my embarrassment to guilt in a seamless fashion.

“Sure I can call her and tell her about your status.  I’ll call her when I get home, no worries.”

He rolled his eyes at me and resumed typing.

I paused, thinking about his hospital roommate and the family who was engaged in lively conversation just behind the flimsy adjacent curtain that provided little if any privacy.

I had barely finished this affirmation when he began gathering his tablet and making his way off the bed, careful to not put too much pressure on the surgically repaired wound in his left leg.  He impatiently glared back at me as if to say “C’mon, we don’t have all day.” I followed him as he deftly navigated, keeping his barely overlapping front and back robes with one hand while simultaneously guiding an IV pole and holding his tablet with the other.  I followed him out into the hallway as he limped in a slow yet deliberate fashion to the empty visitor’s lounge.  I opened the door for him.

He brushed by me and quickly shut off the television, gingerly sat down and began typing his Aunt’s phone number and name on the tablet.  I sat beside him, dialed her number, and put her on speakerphone.  A couple of rings later, a delicate female’s voice chimed through.

“Hi, my name is David Malebranche, I’m the primary care physician for your nephew.  I have him here right next to me, but he can’t talk because his mouth is still wired shut after his surgery. He wanted me to call you because he trusts you the most out of anyone in the family.”  My eyes darted back and forth for his reassurance, and he nodded in approval at the impromptu script I was developing.

She paused, her voice suddenly becoming strained and concerned at the odd nature of this phone call.

“Is everything ok?  I was seeing him every day but had to catch the flight back home yesterday.”

“Yes, everything’s fine…,” he nodded at me again as I nervously continued, “but because he trusts you… well, I don’t know any other way to tell you this but directly… he wanted me to let you know that he is HIV positive.”

Her voice echoed a mix of surprise and concern as I helplessly grasped for any comforting words to assuage the impact of this bombshell I had just dropped in her lap.  I continued the oral translation as his fingers danced across the screen, conveying to her how long he had been positive, that he was doing fine, and how it had nothing to do with the car accident.  The speakerphone remained mostly silent, with only an occasional grainy “Ok” coming through. He concluded with a final message for me to relay to her:

“You can tell Uncle, but don’t tell Grandma.  She can’t know.”

I looked at him strangely.  More mucus sputtered as he continued typing, speaking directly to me this time.

“I’ve known about my HIV status for over 5 years, but I’ve never told them about my sexuality. I wouldn’t have a problem telling them that I’m gay, but I didn’t tell anyone about the HIV because I didn’t want to embarrass the family.”

At that moment his nimble fingers stopped, he looked intently at the phone and slumped back in his chair as if he had just finished running a marathon.  I asked his Aunt if she had any questions for me.  When she said “no,” I turned his way, and he nodded his head, peacefully closing his eyes as he turned off his tablet.  We said goodbye to his Aunt, then to each other, and I watched him methodically make his way back to his room.

When I returned the next day, he was surrounded by friends from church, laughing and reminiscing as they watched an old video of him singing during Sunday Service: His fingers glided over the organ’s keys with a careless frivolity, and gorgeous chords of praise soared from his tongue, sprinkling the room with transcendent wisps of hope. I turned to see his bed, now neatly made and devoid of the soiled gauze pads, towels, and suction tubes that had adorned his pallet the day before. He had just come back from having the wires in his jaw removed; the skull cap now off, showing off a brand new fade and exquisitely trimmed beard; and he was sitting upright in his chair like a king holding court, graciously interacting with thankful members of his kingdom. I shook his hand and held it tightly.

“How are you feeling?”

His deep-set brown eyes looked through me, and a rumbling gruff voice escaped from newly moistened lips that were learning to part all over again.

“Better. They said I may go home in a few days.”

After these words melodiously streamed from his mouth, a painfully executed demonstration of pearly white teeth followed; resurrected, rejuvenated, and recently emancipated from restrictive wires.

I smiled back. He had found his voice. 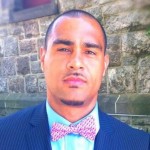 David J. Malebranche is a Primary Care Physician within the University of Pennsylvania’s Student Health Services and a writer/activist whose work centers on the intersection of race, sexuality, and public health.

Related ItemsFamilyHealthHIV/AIDSreligionSexualityU.S.
← Previous Story Op-Ed: Putting Violence Against Women on ‘Display’
Next Story → Special Report: The Commission on the Status of Women Comes to an End