anatomy of a rape

there are ways and ways to love a woman

find out what you did not know in your

ways to denude her in a bus, a train,

even a cycle if your balance is right

find out how to choose friends to invite

in partaking, how to muffle her cries, how to let

of meat, all in 10 easy sentences

or less, a DIY section on how and where

to dump off the body follows

read on to the next page, if you have time,

what to do in other circumstances

under the heading that reads

to shahjahaan, on castration of a rapist

love making will never be the same

world over, we will be thinking each time

of a man who did not get what he deserved

nor the woman he did it to

wake up shah jahaan, you who could sleep at night

cutting off arms which gave life to your dream

now is the chance to redeem yourself : build

another monument, this time to hate

only this time, strike before then after

only this time, let it be 561 feet under

the world could always do with one erection less

the universe is talking in a thousand non-tongues

today, pull out your eyes, your ears, your paper

place one on the other, or all three

before they died as stillborn whispers and left

love in the season of rape

winter this year has its own vocabulary

love loudly. or intend to. for women have always

women think there is a quietness in the love of men

for this winter has given them candles

which they burn against cold, against pain,

against pain they never knew to be pain,

against love they feel inside but are scared to admit

this season they can be forgiven for thinking

all rooms are their rooms, all windows are to

they lie and wait for their men to come home

they lie in their beds with their hair in the clouds

their dreams on the pillow, asleep but just not yet

Background on the poems

These four poems were written as a series in the aftermath of gang rape in New Delhi in December. Each of them charts the movement as it escalated on the streets of New Delhi.

‘anatomy of a rape’ was an immediate anguish to the incident.

This was translated in Tamil, (one of Indian regional languages, and his mother tongue) by Mr. Sridharan Madhusudhanan, Director, South Asian Association for Regional Cooperation (SAARC), Ministry of External Affairs, India. It was subsequently published in a Tamil online magazine.

‘to shahjahaan, on castration of a rapist’ came about as the public demand for castration of rapists grew. The poem refers to the Shah Jahaan, the mughal emperor who built Taj Mahal. He is believed to have cut off hands of all the masons who helped built Taj so that they may not ever do the same work again.

‘RIP’ was written as the girl, the victim, died and the hullabaloo of words that followed thereafter.

‘love in the season of rape’ is the last one in the series. It was inspired by candle marches women in New Delhi held. It sought to take a look at how real (or futile) their dreams of change will be. 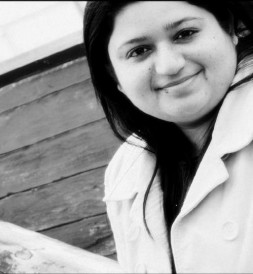 An alumna of Indian Institute of Management, Lucknow, Pooja studied English Literature at Jesus & Mary College, Delhi University, India. She went on to do Post-Graduate Diploma in Journalism from Indian Institute of Mass Communication, New Delhi. For Pooja, poetry is like coming home. She loves to spend time with her son and her dog. An interior decor enthusiast, Pooja enjoys pasta and photography.