By Nicole Guidotti-Hernández on February 14, 2013 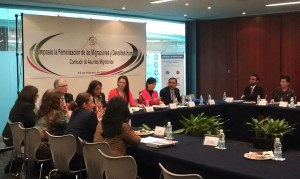 Today is not only Valentine’s day or Día V, the day against violence against women, but it marks an interesting moment in Mexican national policy. As a participant in the Simpoio Internacional de Feminización de las Migraciones y Derechos Humanos at the Centro de Estudios Economicos at the UNAM in Mexico City, it has been invaluable to see how the  Mexican State and researchers are trying to understand, track, and make visible the ways in which gender and sexuality segment the migration process. Discussions of vulnerable populations, HIV, and sexual violence characterized the main issues explored at the symposium. With a centralized focus on migrant corridors in the Americas, we are struggling with a stream of processes of power and violence on both sides of the U.S.-Mexico Border.

The question of violence in the lives of women is a long-standing conversation in feminist circles, but what the Symposium has highlighted is the ways in which women face different structures of violence in transit. How do we begin to account for the numbers of women and what happens to them in transit from country of origin to their desired point of migration? How do we provide services for those who encounter sexual violence on the part of coyotes, narcotraficantes, or other co-migrants that view such women as vulnerable and rapeable from the outset? How does the feminization of migration, which is becoming an increasingly younger group of women between the ages of 15-35 (before 2000, age range was 25-45), impact the ways that both the U.S. and Mexican States, NGOs, and academics respond to the needs of these populations in transit? What kind of protocols can be created to navigate the breech between international and national law for migrant women in transit to provide access to justice when they are vicitims of sexual violence? How can we attend to the material, psychic, and social conditions of gender (both masculinization, feminization, queer, etc.) that determine the vulnerability of migrant populations? 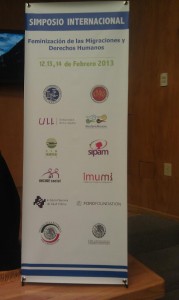 In the case of Mexico, one major crisis of the state and NGO service organizations is in providing services to Indigenous women and female migrants from Central America as they venture through the war zone that has become the southern border. Several scholars spoke of “La Bestia” (closely detailed in the film Sin Nombre), the train that runs from the southern border, through Tabasco, central Mexican States, and finally to the U.S. border with Renyosa in the east and Nogales in the west, in order to highlight the quotidian violence female migrants face. And while certain communities like Las Patronas of Veracruz, a group of women who cook food for migrants on the train with a feminist ethic of care, other communities see migrants, and migrant women in particular, as a vulnerable market for both theft and simple growth of the informal economy that is created by migration.

Nonetheless, one of the curious absences of the symposium and the discourses of the state staged prior to signing the accord was the question of immigrant detention. While there is a steady acknowledgement of the militarization of the Southern and Northern and Mexican borders, there was little conversation about immigrant detention, deportation, and incarceration. My fear is that if we focus mostly on providing services for women in transit, we miss the question of state accountability and the building of new-phase carceral ways of organizing the world in the Western Hemisphere.

While I am moved by the activism and model for accounting for the sexual violence against Indigenous, Central American, and Mexican women migrants in what the Ford Foundation called “the Mesoamerican Migrant Corridor,” we also have to bring migrant detention and the criminalization of women migrants into the conversation as they account for 49% of the people who try to make the journey northward every year. As the Comisión de Asuntos Migratorios in the Mexican Senate signs the accord today to take a stand against the violence against women migrants, it is hard to tell if this will be another document of broken promises, or instead, something that will create a safer future.