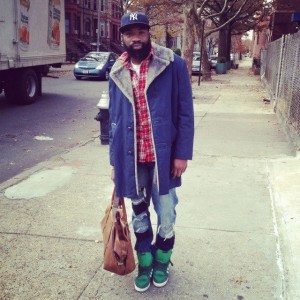 Enter Scene: I am walking in Bed-Stuy, Brooklyn—where we do more than die, by the way—rocking a close fade with two parts on the side, a full beard and mustache lined up perfectly, eyes protected by a pair of fresh chocolate browline frames (I was two blocks from Malcolm X boulevard, after all). I am donning a fitted button-up white shirt, closed off with a pink and gray striped bowtie, form-fitting charcoal gray blazer, dark blue kinda-skinny jeans, and a pair of hot pink and silvery gray kicks.

Passerbyer 1 checks out my footwear.

Passerbyer 2 offers up the obligatory, “Yo, son, your kicks are hot.”

Passerbyer 3 is looking at me like I’m way off, as if to say, “Really, you got on pink sneakers, sucka? That’s gay as hell. You are doing way too much!”

Passerbyer 4, my neighbor, repeats, like he always does, “You cool, brother.”

My representation as a certain type of black man often transgresses the accepted boundaries of black masculinity. The ways I cut my hair, shape–or refuse to shape–my beard, style my clothes, walk, talk, and gesture tend to confound some folk and, on occasion, anger others because of my seeming transgressions. Sinning ain’t easy.

Indeed, some will stare at me as I make my way down any street rocking a beard, frames, “man bag,” and a little less than loose clothing because my gender presentation seems to be read as a sign of non-heterosexuality, deviance. In fact, most folk are okay with what they “see” until they notice that I am wearing something like hot pink (!) sneakers. According to some, a black man wearing hot pink sneakers, like a black woman wearing a suit, ain’t at all “cool.”

The notion of “Black cool,” in particular, seems to be limited, limiting, and quite “straight” (as in hetero and rigid). I am thinking, for example, of one of the inspirations that motivated Rebecca Walker’s investigation of “black cool.” She mentioned during an interview on NPR that an image of then-Senator Barack Obama exiting a black Lincoln Town Car during the 2008 campaign “was really, at that moment, the epitome of black cool.”

She went on to say that she was “drawn to that image because [she] wanted to decode it and to see where it fit into this Afro-Atlantic aesthetic.” And while that image is but one of Walker’s inspirations (and while her book, Black Cool: One Thousand Streams of Blackness, actually includes critical and beautiful essays that think through the gendering of “black cool”), that particular picture of Obama locates the quotidian “black cool” in a male-bodied, masculine, straight black man and leaves me to wonder: Does coolness exist anywhere beyond black masculinity, maleness, and heterosexuality? As some of the writers in Walker’s Black Cool argue, I think so.

I can recall, for example, growing up with an older female cousin who was a swagged-out straight young woman and mother. She often chilled with the dudes in my family. Her vernacular was cool. Her walk was cool, or, as others would say, “pimped out.” She was cool. But this one black straight woman’s coolness was contingent upon the masculinity that she performed expertly. And, no, she didn’t identify as lesbian. Which, again, forces me to consider: are masculine performances solely emblematic of “black cool”? 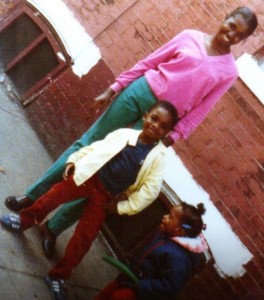 Unlike my swaggalicious female cousin, I failed at performing certain black masculinities. I tried my best to perfect the art of swag, but my gender expressions took much practice to perfect over time and are the result of me trying to fit into the normative boxes (i.e. men play sports and not with dolls; men are strong and not weak; men wear blue and not pink sneakers) that others attempted to trap me within. I was called a “fag” often and my cousin was called a “dyke” quite a bit, because our styles and expressions were moving beyond the gender boxes, somewhere other than the restrictive spaces of the normal that attempted to constrain us. And folk who escape the tight prison cells of gender, like “fags,” aren’t cool, until they are.

There are black male artists (especially those who have been identified as “fags” and “freaks”), for example, who have embodied, or performed, coolness in ways that go against the mundane gender formulas that tend to limit us. Little Richard, Marvin Gaye, Prince, Michael Jackson, Andre 3000, Kanye West, Cee-Lo Green, and yes, RuPaul (when he is out of drag) come to mind. These black men have expanded cool beyond the boundaries of a certain type of constricting black masculinity.

And, yep, there are also black women like Grace Jones, Monique, India Arie, Erykah Badu, Jada Pinkett-Smith (and her daughter Willow), Queen Latifah, Lil’ Kim, and Janelle Monae who exhibit coolness through the ways they fashion themselves, refuse norms, contest and perform gender. And some of these women are feminine performing, indeed.

In my own life, freedom from the prison of gender normativity allowed me to really be. I am no longer trapped in makeshift gender containers that were never strong enough to contain my authentic self-expression in the first place. Me, a Black unconventional queer brother who is sometimes masculine and other times feminine performing, cool? Well, maybe.

Black cool was queer before queer was cool

A friend pushed me to consider Miles Davis’s album, “Birth of the Cool,” which was released in 1957 on Capitol Records, as inspiration when reflecting on black cool. What’s interesting about Davis’s musical styling on this particular album is his use of polyphony, a musical texture where two or more voices are employed and not just one dominant voice.

Black cool is polyphony, that is, it is multi-textured and free from one dominant voice and way of being. It’s like jazz: always moving in one or many directions with and without intent. It is resistance to structure and, yet, it creates form without even trying. 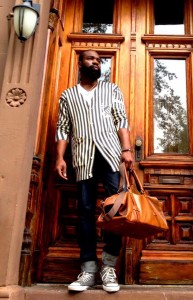 In other words, it keeps moving, redefining itself, and traveling along the ellipses because it refuses to be comfortably fixed. And that’s why I dig the black and cool, because queering is a political intervention that attempts to do the same: it signals one’s resistance to normativities (sexual or otherwise), boundaries, and binaries.

Given this, it seems to me that any notion of black cool that is only imagined as being exercised or embodied by black masculine men and/or some masculine women is, well, played out. Black cool is multi-textured, unrestrictive, and forever changing. We, black folk are diverse in our embodiments, sexual identities, and gender expressions; therefore, our imaginations of black cool, if they are to be unrestrictive, should be vast enough to consider feminine women, feminine men, gender variant/trans men and women, and differently-abled individuals.

Indeed, coolness, like queerness, comes as the result of a type of unsettling, a desire for something different. Thus, it seems that the black “freaks,” “fags,” “femmes,” and “dykes,” among us might be experts in the art of embodying black cool, after all.