Shades of Darkness – The Feminist Wire 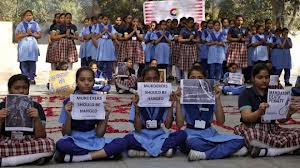 In this globalizing world made possible largely through the social media, it is not difficult to follow what is happening in any part of the world, especially India. Yes, Delhi, and other parts of India to a lesser degree, has been consumed by the brutal rape/death of a 23-year old woman. What is not surprising is that rape continues to be a manifestation of a misogynist culture (we can debate how this misogyny has mutated in its passage through the colonial-national confrontations of the 19th and 20th century in India) and that legislative, adjudicative, and enforcement pieces never fit in this not-so-strange puzzle.

What is also not surprising is that democratically elected federal and state governments (we can debate what “democratically elected” means in India–where the right to elect a representative is not the same as the freedom to make an informed choice of this representative—people vote for fear or favor) will use water canons and tear gas against a largely peaceful gathering of protestors in the name of security. The word “rioting” has often been used to enforce section 144 (to prevent any form of a collective)—a carryover from the colonial Raj—when any form of collective protest was marked as an affront and a threat to the colonial state. And since the post-colonial state is a derivative of this colonial state there are no citizens with the constitutional right to protest peacefully against cultural practices that a political state condones in the way of its apathy to both. 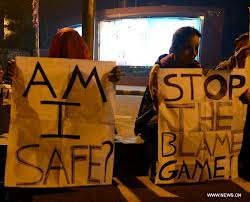 So yes, screaming for justice in the faces of the police-men armed with stun guns and lathis (batons) amounts to “rioting” and therefore subjection to unhindered police brutality. This is not to say that a certain section of the protesting masses was not infiltrated by what in India is referred to as the “hooligan” element–generally young men who have nothing better to do than tag on their existential angst onto a cause/protest but in a violent way. These men may have started the “rioting” part even as the peaceful protestors continued with their day and night time vigil, and despite their peaceful ways were mistreated by the police and the hooligans. However, on the day of the passing of the young woman in Singapore, the protests were largely peaceful all around.

What is stunning to me though, is that these liberalized metropoles, especially Delhi, have now become war zones–infact a genocide zone for women. It’s like the men have declared a new kind of genocidal war against women living and working there. I have lived in Delhi all my young adult life and even though I experienced harassment every time I was on a public bus or train, the nature of this harassment never took on the brutality that you now hear of. Everyday you hear of women being almost abducted by men in vans and/or being abducted/raped/ and left for dead on the public streets. Delhi, my Delhi, has become the rape capital in a way that women now want to probably wear armors and carry loaded pistols in order to protect themselves from this patriarchal Hobbesian state of culture/state.

Times of India, a national newspaper, reported recently that there is dramatic spurt in women of all ages applying for gun licenses. The brutal nature of abductions and rape is reason beyond doubt that women are under siege in the capital, that there is imminent threat to their lives, and they need to protect themselves in every way legally possible.  Liberalization has certainly made commodities of women but it has also vulgarized this commodity to a point that it isn’t just about the buying and selling of this commodity (through Bollywood films, product advertising, tourism etc.), but its mutilation to death. I have no idea how a change in the law can change the enforcement of this law when the police not only condones but also perpetrates crimes against women. 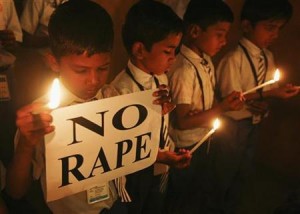 And I have no idea how to change a misogynist culture that liberalization has transmogrified into a new beast intent on devouring and then spitting women out like they are less than an irritating kernel stuck in its teeth. I look at my two nephews and I have no idea how to go about protecting them from becoming trained in this misogynism or teaching them how to combat it. I don’t know how they might challenge their peers to be more respectful to women without being threatened within an inch of their lives. What must the young man who was with the young woman who passed away be going through today? He was with her and he couldn’t protect her? What must he do to live with his own helplessness and loss?

I don’t know. I feel as helpless today, even more, than 16 years ago when we were fighting this menace primarily in rural India. Candlelight vigils did nothing then and they do nothing now. Peaceful protests did nothing then, and they do nothing now. But what is worth noting is the role of social media in publicizing an event to the point that everyone seems to be invested at least emotionally in it—there is anger, there is restlessness, there is shock and there are cries for something different to happen. And this, the government may not ignore even if it might want to. It is at least a little heartening to see swells and swells of protests across the nation against the men and the government, which has been slow in responding to the anger of the protestors. 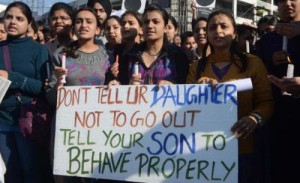 Now, the men accused of the crime, have been booked for murder and the government is demanding the death penalty for them. And given the unrelenting nature of the protests, the accused will be hanged to death. But this will lead to more questions about the role of the law, of government, in managing, questioning, and ultimately changing cultural practices that are anti-women through all means, legal and otherwise, possible.