Talking About Grief and Violence – The Feminist Wire

Talking About Grief and Violence

From the editors: Here at TFW, we have many, many email and phone conversations that never make their way onto our site. We bounce ideas off of each other, share thoughts and life updates, and also process how we’re feeling about goings-on in the world. And as with many families/communities, our exchanges are messy, raw, emotional, sometimes contested, and often do not lead to any specific resolution. The messiness is hidden by the polished, edited pieces we present to the world at The Feminist Wire. This past week, we were all deeply affected by the Connecticut murders, although our responses to the violence were anything but uniform.

For most of us, our first urge when events of this nature occur is to write something. But what? How to respond in the face of such violence, knowing other violences are also occurring? What could we say?  We (Monica Casper, Darnell L. Moore, Heather Laine Talley, Tamura Lomax, and David Leonard) began a conversation that we didn’t actually intend to publish; mostly, we just wanted to be in community with each other. We decided to make our exchanges “live” after realizing that some of the mess and complexity is necessary to the public discourse. There is so much being written about this incident–from calls for more mental health care to analyses of male violence to attacks on the killer’s mother–that purports to have the “right” diagnosis and prognosis.

Here at TFW, we offer neither.  We just have questions, ruminations, and various emotions. We have had, at some points throughout the week, words to describe our feelings. And there were moments when we have had none to offer. But we have, at all times, a community: of comrades, of confidants, of care. We invite you into a portion of our communal conversation…

Monica: I’ve been thinking so much, as we all have, about the shootings in Newtown, CT.  I’ve also read way too many Facebook posts, NYT articles, et cetera. I am fatigued, grief stricken, and angry—like all of us, I imagine.  And like many of us, I can’t seem to get my thoughts into some semblance of order. So I wanted to share with all of you what I’m thinking about, to see if my thoughts are at all helpful to the cause, or worth following up on.

First, it’s strange to me to be writing an article on elephant trauma, for my friend Maurice Stevens, at the same time all of this is happening. I feel both deeply committed to the project of interjecting “critical” into any discussion of trauma and yet, I also feel relentlessly “traumatized” right now by events, their representation, the horror. How to balance these dueling sensibilities feels, frankly, exhausting at this moment.  And I’m not sure how to write about trauma this week, other than probably to completely now redo the intro to that article.

Second, I’m finding myself conflicted, angry, and hopeful about the posts regarding mental health. We have schizophrenia in our family, and I am acutely sensitive to conversations about mental health and illness.  Had my biological father, at a long-ago point in our family history, had access to different kinds of weapons, our story and lives might have turned out differently. As it was, one time in Chicago in the 1970s, we came home from school and found police officers swarming all over our apartment complex; my dad had called (this is after my mom left him and took us with her) and told them somebody was being murdered in the home. He also called in a bomb threat to our elementary school, which prompted an evacuation.

So I GET the mental illness and trauma thing. It is woven into my family history.

I feel that we MUST have these conversations, but how do we do it without privileging one kind of suffering over another; some victims over others; whiteness over blackness; and so on? 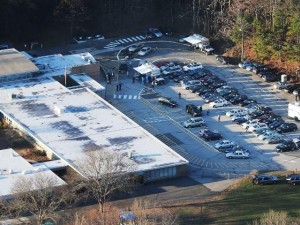 Darnell: Monica, you’ve pretty much articulated a lot of my own sentiments. Is there a way, I wonder, to be wholly empathic and critical, present in the moment and aware of how this “moment” exists within broader (and specific) genealogies of struggle?

Quite honestly, I have been mad as hell at those who have first critiqued the systems at work in this moment without attending to the real time loss of so many little babies and their caregivers. I mean, damn, can we stop, for a moment, to truly demonstrate empathetic regard? Can we, for once, consider another’s pain and refuse the impulse to further politicize a tragedy that has shaken up the lives of others? I have little nieces and nephews and all I could feel in the moment, despite the scandalous ways that media outlets tend to “tell the story,” was a sense of concern and fear for their safety–a fear that I contend with daily.

Yet, I’ve been livid at the ways that this tragic moment has been taken up as a type of extramundane violence that doesn’t happen in quaint spaces like Newtown (but is expected to transpire in other places like, say, Chi-town) at the hands of a white male (who apparently massacred hordes of people as a result of mental health issues only).

Today, I am sitting with the myriad feelings I am experiencing. That is what it means to be human, after all. And even while many are now contending with the traumatizing results of fleshly violence as it has manifested in Newtown and some are left to contend with another type of (ontological) violence that renders the deaths of so many others non-factors, this moment is a reminder that all violences are insidious.

Heather: I’m so glad you are talking about this with us, Monica. I too am pulled and torn, especially on the heels of a few days with my own precious 9-year old godchild: a baby who is dearer to me than anyone I’ve ever known. Today, I am close to the visceral experience of child love, and I also very much resonate with the critical question: why are these particular children being grieved so deeply when the deaths of so many children are resolutely ignored? Our collaborator Omar Ricks has incisively raised this question, naming other instances of chronic violence directed at young people over 2012–horrendous rates of murder in Chicago and other cities for example. I really am wrestling with how we might balance empathy with the Newtown families and the critique of the national grieving of this massacre alongside a glaring silence around so many others.

I wonder how we might honor this tragedy and really hear the critique of the national grieving that is unfolding. Can we empathize with this acute loss AND the chronic hurt of exclusion from public recognition of routine violence experienced by the most vulnerable of us?

Violences take multiple forms. But not all pain looks the same, either. The pain that emanates from this mass killing makes intuitive sense to most of us. But the critique of whose lives matter and who registers as worthy of national grieving is a story of painfulness, too.

I’m hoping that especially in these days I can hold it all–to honor what did happen AND to not be complicit in the endemic erasure of other violences, to hear both stories of pain.

Tamura: I had to check out last night and just be fully in the moment with my family. I needed to see their faces, hear them laugh, hear about their day, be safely silly, etc. etc.  It’s in moments like these that we truly recognize the privilege of loving communities, especially those we live with.

All of you are right on, I think.  Our present reality is complex, winding and daunting. To be sure, how I feel changes from one moment to the next. Yet, what remains steady is deep sadness. I’m holding a lot, like you all, in tension with that.  I’m sad regarding so much.  The state of our present life world.  How about a forum on that?  Violence–all kinds–abounds.  There’s no marker for its beginning…or ending.

Truth be told, I’m conflicted about how to best respond to the most recent shootings in Newtown, CT.  Most everyone seems to have an “answer.”  All I have are questions.  I want to say that now is the time to address all that you mentioned, Monica.  HOWEVER, is today the day?  If not, when?  If so, in what space?  I’m really not sure.  Mourning takes place in a great many ways. Who am I to suggest that one person’s response isn’t their way of mourning?

Yet, all I can [clearly] think of right now is loss of life–all life–and its ripple effects. My heart mourns for those closest to this.  I particularly lament for the deceased and their immediate beloveds.  I know many are impacted.  Still, I can’t even begin to wrap my mind around whatever those babies experienced in their final moments, or what their parents experienced (and are experiencing) upon learning of their loss and identifying them.  *This* is where my faith comes in.  I know many are angry with God, and many are raising critical (and necessary) questions of divine existence.  I get it.  I would too.  Been there, in fact.  But sometimes we just don’t have answers.  In these instances, I need my faith to step in. 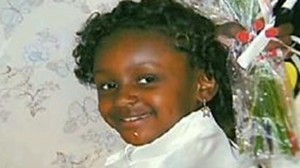 Seven-year old Heaven Sutton who was shot and killed in Chicago in June 2012. (Source: FoxNews.com)

On a related note, I’m conflicted about the production of social empathy.  Who gets to receive it, who doesn’t, and why?  There is a certain callousness around, or perhaps a social silence against, the loss of [black girl] life, particularly when the body or beauty falls outside of certain social standards.  This is incredibly troubling to me.  It seems children have to have a certain aesthetic (and/or class privilege) for social mourning.  Is now the time to address this?  I’m not sure.  But then again…some black girls never had a “time.”

David: I feel the same level of ambivalence in terms of the various issues. At one level, I too have been devastated, emotional about what happened in Newtown.  I can only imagine the trauma and the pain the families are enduring; it pains me to think about the lost lives and the fear that the children felt in the waning minutes of their lives.  Yet, at another level, I feel angry at myself and society as to why the murder of children in other locations, in other situations, in other places does not compel national mourning.  What about the victims of drone attacks; what about the kids who die each and every day because of inadequate water; what about the kids who are dying on the streets throughout this country? This angers me as well, as does the continued effort to explain away Adam Lanza’s actions.  This is why I often turn my attention to media narratives because it allows for a space to spotlight the trauma and tragedy in Newtown while highlighting the perpetuated injustices emanating from the media.

I do find myself continuing to ask — can we acknowledge this moment while also recognizing the many other forms of violence; what is the relationship between these various forms of violence?  How can we address these shooting sprees in relationship to state violence? Can we talk about acknowledged and unacknowledged trauma?  I clearly don’t have the answers and maybe there aren’t are answers, which is part of the difficulty.  We must continue to ask questions, that is for sure.