Book Review: 101 Things That Are Not True About The Most Famous Black Women Alive – The Feminist Wire

Home / Black Women / Book Review: 101 Things That Are Not True About The Most Famous Black Women Alive

Book Review: 101 Things That Are Not True About The Most Famous Black Women Alive

The form of the list has not always been kind to black women.  Since slave ledgers first recorded the names, dates of sale, and approximate ages of human chattel, black women have been expected to be immediately visible, legible, knowable, and therefore objectifiable and commodifiable.  Truths about black women, often presented in list-like statements of fact, have been understood to be self-evident.  When black women are in the public eye, this situation is magnified as public perception builds on and validates itself, largely through the media’s creation and policing of images.  Alexis Pauline Gumbs’s book of list poems, One Hundred and One Things That Are Not True About The Most Famous Black Women Alive, then, is an intervention into black women’s relationships with the list form, with truth-telling, with public personages, and with each other.  Featuring poems on Oprah Winfrey, Condoleezza Rice (“Condee”), Michelle Obama, Serena Williams, Venus Williams, Beyoncé Knowles, Halle Berry, Gabby Douglas, Tina Turner, and Aretha Franklin, the collection is a questioning of representation and an opening to the possibility of new images. 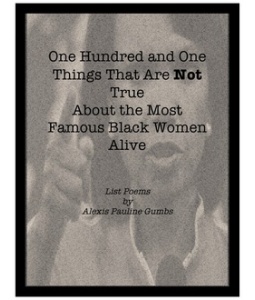 Gumbs has stated that in writing the poems, she “wanted to offer some space between the public persona and the assumptions and stereotypes that they’re viewed through” and to make “a gesture towards the fact that they might have an interior life that can’t be known, [that] can’t be claimed by the public.” Gumbs makes this space through the telling of untruths.  Each poem features ten statements that are not true, which both throw into relief current beliefs about the women discussed and reveal novel ideas to consider.  The poems are at once funny, playful, serious, sad, and maddening.  While the line about Oprah, “Tyler Perry is her test tube baby out the fridge,” might elicit a chuckle, two lines later one finds: “she can still fly,” a sobering end to the poem in its untruth. The theme of flight is an important one for Gumbs and places her work in conversation with writers, including Toni Morrison, who have explored the trope of the flying African.  As they provide spaces for flights of the mind, for escape, for rising above, or simply for elevating and expanding our perceptions of whom these women could be, the poems enliven what were essentially static public figures.  Other key themes explored in the collection include: love, beauty, safety, spirituality, and strength.  Through these themes, Gumbs is adeptly able to suggest vulnerability within Serena Williams, for example, who is constantly noted for the strength and muscularity of her body.  In her list of untruths dedicated to Serena, Gumbs writes: “she never feels like a straw could break her shoulder.” In moves such as this, Gumbs opens territory unexplored in the public imagination.

Despite her efforts, Gumbs does not fully escape the bind of truth. By presenting what is not true, she provides the poetic equivalent to a photographic negative, which leaves space for a positive image to be constructed.  This negative space, however, is outlined by the claims of the untruth and thus has its limits. If they are definitively untrue, then her statements hold the opposite truths within them.  These inner truths directly contradict prevailing images but are no less defining. The untruths are, in their own ways, statements of fact and therefore inflexible.  Although Gumbs’s untruths offer new avenues for thinking about these women, they rigidly define the boundaries of this thinking.  In this way, Gumbs may, at times, reproduce the type of strictures that the collection aims to disrupt.  These constraints reorient discourse around these women, but occasionally leave conspicuous gaps in the conversations.  Notably near-absent are moments of critique. Constructive criticism deriving from a place of, as Gumbs puts it, “loving black women,” could have deepened the impact of the poems by further expanding the possibilities for thinking and speaking about the most famous black women alive, while still creating distance from typical evaluations of these women.

Yet Gumbs appears to be aware of the limitations of her untruth-telling and pushes to overcome them. She interrupts her own form to make statements not about the most famous black women alive, but about “you.”  Within five of the collection’s ten poems, the subject of certain lines is not “she,” but “you,” the reader, spectator, commentator.  These lines call into question the role “you” play in the representation of these women such that one’s complicity in their making (and unmaking) is laid bare.  “You” are a part of who “she” [the famous black woman in question] is.  For instance, one of the “Ten Things That Are Not True About Halle Berry” is: “you think she is black enough and you are not mad.” This is not about Berry’s interior life, but instead about how public opinions and sentiments around racial classification and performance shape her.  In the line that follows, Gumbs makes clear that this shaping has everything to do with the reader/observer’s insecurities: “she does not laugh at herself.  She laughs at you.” If “you” wrongly believe that Halle Berry is laughing at you, this belief will color everything else “you” believe about her.  If Berry makes “you” mad because she fails to fulfill accepted qualifications for blackness, “you” are the one placing limitations on whom she can be.  It is not just the faceless media defining these women, but the unnamed reader as well. And in these definitions, “you” are also being defined.

In the slipperiness of this sliding among the most famous black women alive and the gaze of the unidentified is where much of the genius of the poems resides.  It is in these moments that Gumbs begins to break open the list form, calling into question the nature of “fact,” highlighting the reciprocal nature of representation, and allowing the reimagining not only of these famous women, but of our relationships to them.  Of her “Ten Things That Are Not True About This Project: Instead of a Preface,” Gumbs lists: “restorative justice is possible here.” If not restorative, Gumbs’s poems are refreshing, necessary, and highly enjoyable.

Sarah Mantilla Griffin is a mother and a literary critic.  She holds a Ph.D. in English from the University of Pennsylvania and a B.A. with honors in American Studies from Stanford University. Her research primarily focuses on African-American literature, with special interests in women’s writing, black feminist theory, and sound theory.