Black Survival in the Uchromatic Dark – The Feminist Wire

Black Survival in the Uchromatic Dark

With all the rock dinosaurs that thundered the Madison Square Garden dome during Wednesday’s 12-12-12 benefit concert, a viewer might have missed that the event also meant to showcase the resilient ordinary people of the greater New York and New Jersey area whose lives were upended by Hurricane Sandy. As with the post-9/11 benefit concert — organized eleven years earlier and for the benefit of the same “venture philanthropy” foundation — pride of place went to first responders: working-class men and women who went the extra mile to help their neighbors and their city, even at the risk of their own safety and the state of their own homes.

It took a cynical commentator indeed to notice the glaring whiteness of the ticket-paying crowd, the performers, and even the lineup of citizen-heroes. Why should any of this be surprising? Kanye and Alicia represented, as did an amazing sister on the drums during Billy Joel’s set. But black people were otherwise relegated, as one commenter on Twitter noted, to comedians and storm victims. But rather than bemoan the absence of Jay-Z — or demur at the overcompensatingly gigantic projection of Keys’s face singing over the finale — might we rather linger upon possibilities that low visibility affords us? What did the 12-12-12 concert unintentionally repeat, and thus perhaps reveal, of the logic of ongoing racial inequity in an era of climate catastrophe?

To answer this question, perhaps we could consider how the darkness that fell on New York and New Jersey during Hurricane Sandy was not, but none other than, the obscurity to which black life is consigned in “post-racial America.” A quick comparison with Hurricane Katrina might suggest a contrast in the fates of a whiter, wealthier Northern metropolis and a poorer, darker Southern one. But the devil is always in the details, nowhere more so than a storm that brings the uneven topography and infrastructure of contemporary urbanization into stark, hyperlocal relief. Depending on where you stand, New York can look a lot like New Orleans (and vice versa). Black life went fugitive during Sandy too, exposing those parts of the powerless grid that were larger than the whole, revealing a city bigger than ‘the City,’ across and under the threshold between the drowned and the saved. 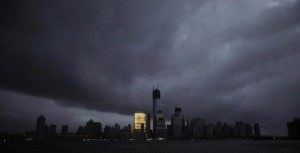 As Yasmin Gunaratnam and Nigel Clarke put it “in more concrete terms: heat, drought, extreme weather events and other manifestations of climate change, will be impacting upon bodies whose life chances are already conditioned by race.” They warn us not to allow climate crisis to recreate modernist clichés of brownskinned peoples “destined to be oppressed by intemperate weather.” And indeed, the utter imbrication of wealth and poverty, security and neglect, that is the urban ecology of the New York region, underscores their point. People of color are everywhere immanent to a crisis whose planetary scale necessarily touches down in hyperlocal contexts, where access to the grid, elevation from sea level, and other almost imperceptible markers of difference continue the work of the historical asymmetries of segregation, colonization, and underdevelopment. As military, governmental, and aid agencies rushed into the breach, people-powered relief occupied these uneven grounds of immediate need. But even smooth, horizontal flows of care often come too late, or too soon, to undo the awful work of striated power. The necessary optimism of the #wegotthis and the utopian ethos of mutual aid needs to be supplemented by the powers of inconsolable mourning if it is to stay tethered to its objects of care.

That this is so is clear from a singular life thrown into the unbearable glare of post-disaster media. A life that went crashing into waters that wrested the drowned from the arms of the saved. A life that forces us to ask what it means to be saved, when what you are delivered into is abandonment, when you are left howling in the wind for twelve hours while your neighbor stands, on the other side of a barricaded door, more fearful of your black presence in his white neighborhood than of the hurricane pounding outside?

What does it mean to be abandoned to life? Two drowned little boys in Staten Island await an answer. The face of their mother, Glenda Moore, caught by media cameras as she approached their lifeless bodies, forces us to witness that which cannot be witnessed, to bear that which cannot be borne, and to affect that which cannot be affected: the violent relatedness into which blackness and whiteness are thrown.

The bare facts of Moore’s case are stark enough: to say that our “hearts go out” to a mother whose infant children Brendan (2) and Connor (4) are torn from her in a storm is to say that something in our hearts give out, something in the universe goes deaf and blind and refuses the blandishments of sentimentality. Not when we learn that before, during, or after (there is confusion) the boys are swept away, neighbors in her predominantly white neighborhood in Staten Island turned her from their door, and one white homeowner misrecognized Moore’s diminutive 130-pound body for that of a large, threatening male, leaving her outside in the storm until a dawn that could not be welcomed reunited her with the bodies of her sons.

Far away, in a blessedly warm, dry, and illuminated place, someone struggled to explain to me how difficult it was for her to grasp the news of Moore’s loss, even as it passed before her eyes and ears on television and the Internet. How difficult it was to slow the moment down to a speed at which it could be mourned, how precarious the singular image of a life was amidst the cascade of media images continuously throwing shards of light and shadow up from the eye of the storm. I took this caution to heart whenever the demand stirred within me to demand greater visibility for black pain, suffering, agency, anything, over the course of the 12-12-12 concert. I was reminded of all that visibility obscures; of the price cheap sympathy carries.

The darkness that fell on New York and New Jersey during Hurricane Sandy was not, but none other than, the obscurity to which black life is consigned, because the re-illumination of the grid, the news, the network, can be as deadly as the black night into which we are thrown. As Moore remains speechless, the usual racist murmuring against her welled up on the Internet, like poisoned groundwater from a toxic waste site. Moore was “stupid” to drive into the storm; her home was “safe”; her white neighbors were right to fear black “looters,” “hoaxers,” and “home invaders”; a “real” mother would have leapt into the waters and drowned with her children, not sought “welfare assistance” from others. She must be “Haitian,” a people known to be hysterical; perhaps she even intended to kill her children, in some sordid bid for pity. That Moore was married to a white Irish man — Damien Moore, father of Connor and Brandon — was further proof of what happens when a “Prole” marries a “NAM”: in the eyes of these “neighbors,” race-mixing can only turn the world topsy-turvy. All this and more on a single, hateful thread on a single, hateful site, dedicated to defending the first response of criminal indifference to black vulnerability, which is racism’s last stand. If media exposure brings such enlightenment, are we better off in the dark?

To venture this remarks may seem to be picking at the scab of racist reaction — amidst all the more well-meaning if belated support for the grieving parents. But we are foolish if we presume such anti-black feeling lacks a venerable history or a virulent future. The Enlightenment philosopher Immanuel Kant offered one telling obiter dicta in the long genealogy of the racist common sense in his 1764 essay, Observations on the Feeling of the Beautiful and the Sublime, where — while he too was assessing the validity of a media report he had received from a black person—he wrote:

And it might be that there was something in this which perhaps deserves to be considered; but in short, this fellow was quite black from head to foot, a clear proof that what he said was stupid.

Such a performance of ostensive, ostentatious “consideration,” cut short by a reminder that blackness is a clear proof of stupidity, is still a condition of the world into which Glenda Moore, speechless, was both saved and abandoned. Even a visit from the president (ever the racial reconciliator, he skillfully wove her tragedy into yet another paean to a heroic white male first-responder, hoping against hope this surrogate could fill in the impossible hole torn out by the stubborn “neighbor”), even this isn’t enough to deliver her, or us, from this condition. That it is not our only condition — that we are not at all times just the target of a Kantian monologue — is only as much consolation as can be drawn in with a breath caught amid waves cresting above the drowned.

Rather than greater visibility into the “black condition” — or fuller representation in media and political spaces prone to betray us — perhaps what we need is greater uchromia. That is to say, perhaps what we need is “to learn to think from the point of view of Black as what determines color … rather than what limits it.” In the uchromic darkness we inhabit, perhaps it is not for us to repair the violent relatedness manifest in the public disbelief that any account a black person could give of their disaster could possibly prove credible. Perhaps it is rather left to us, without the consolation of tears, to disturb that violent relatedness.