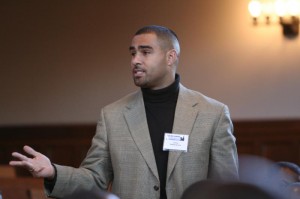 TFW: The theme for World AIDS Day from 2011-2015, which is “Getting to Zero: Zero new HIV infections. Zero discrimination. Zero AIDS related deaths,” is a forward-looking goal that some may read as hyperbolic given the steady rates of HIV among certain populations. Can we get to zero? If so, what do we need to get there?

DJM: I think you are right to call it hyperbole, but I get the point. They want to shoot for the stars so that even if we land in the clouds, we can still claim some form of success, as the saying goes.  I don’t think it’s realistic to get to “zero” in the immediate future, but we have to have something to which we can aspire.  Getting there is going to require a lot of interconnected and coordinated efforts from individuals and communities in various disciplines.  It’s an interesting time right now as the world of HIV prevention has really shifted to a heavy emphasis on biomedical interventions such as pre-exposure prophylaxis (PrEP), microbicides, vaccines, and treatment as prevention.  There is absolutely nothing wrong with exploring these options, but I fear that many medically inclined persons have given up on behavioral and larger social/structural approaches in favor of these medicalized ones.

The answer lies in integrating biomedical advances and social/structural approaches, but I don’t think we are quite there.  The science is so new in these PrEP, microbicide, and treatment as prevention studies that I think we are having trouble rolling them out in real world situations.  It’s one thing to say in a controlled research environment that taking an HIV pill once a day can reduce the risk of HIV acquisition among HIV-negative folk by 44%, but it’s quite another to see how it plays out in real life situations.

We have a really faulty medical system overall in which we are trying to squeeze biomedical HIV prevention efforts, but if the foundation is shaky, unequal and fraught with racial and economic disparities, how do we see this wonderful science working in this environment?  To me, the solutions will have to straddle balancing short-term and long-term solutions.  In the short-term, the main focus can and should be on identifying who is HIV positive, to get them in medical care and on treatment that can prevent their own medical complications and possible transmission to their sexual partners.  The long-term solutions involve figuring out how to address an American and global culture that embraces divides between the haves and the have nots – equalizing opportunities for educational advancement, employment, access to health care and other social disparities. These issues illuminate the hard and long work that no one has the time, inclination or money to tackle; yet, it is necessary that we address these structural issues to make any inroads in curbing the current HIV epidemic.  So in short, I think the medical approaches that we have now are encouraging, but as we say in research, they are “necessary but not sufficient” components on their own in getting HIV to “zero.”

TFW: Much has been written by policy makers, medical and social science researchers, HIV prevention service providers and other experts in the field. A lot has been said and tried. What, would you say, are innovative ideas and practices that we have yet to think through and engage?

DJM: For me, the most innovative idea or practice we can think through and engage is actually embracing a downstream approach to HIV that doesn’t start with HIV as a disease and work backwards. Instead, we should deal with the larger social conditions that couch HIV first and incorporate HIV prevention and treatment into these models. Moreover, and most specifically for same gender loving and transgender individuals, we need to embrace and promote more general health models that include HIV as a part of overall physical, mental, sexual and spiritual health.   As it stands now, we tend to work from deficits and sexuality-based models that just view sexually diverse people as static petri dishes from which HIV and sexually transmitted infections arise.  And innovative ideas that frame our existence outside of the strict parameters of HIV and sexual pathology must come from us. If we think that the Centers for Disease Control (CDC), National Institute of Health or major university researchers are going to spearhead this movement, we will be waiting forever.  There is much to celebrate about being black and same gender loving, but that isn’t always highlighted in our discussions, even among ourselves.

That is from the social perspective—obviously things like HIV medication advances and potential vaccine developments are exciting and innovative in and of themselves.  But I recently heard a story on NPR about how losing one’s job is by itself a risk factor for heart attacks on par with smoking.  I would love to see those kinds of studies done, particularly those that follow people along over time, measuring how stress of racial and sexuality-based microaggressions may impact sexual behavior, HIV testing practices, follow up with medical care, etc.  By the same token, I would also love to see the studies that follow black and brown people over time (months or years), measuring how positive variables like social support, family and spirituality lead to healthy outcomes like increased life expectancy, job acquisition and positive mental health.  I think looking at how our social conditions influence our mental and physical states over time will give us insight in how to gauge both the positive and negative influences in our lives and help us to determine how we can maximize the positive aspects and minimize the negative aspects.

TFW: You often note the need to humanize medical care in such a way that medical care providers might engage HIV positive individuals as human beings who are experts of their conditions and life worlds. Can you say a bit about your approach to care and why you think it is critical?

DJM: We tend to forget that in general in health care there are people behind the conditions we are treating.  I think it’s easier for many medical professionals to personify them as disease entities, that way you don’t have to worry about getting emotionally invested while you are handling a lot of complex medical problems.  For instance, I remember training in Atlanta and hearing residents calling patients “my asthmatic,” “my sickler,” (referring to sickle cell disease), “my HIV-er,” etc.  This is a problem in medical culture in general, and so it’s no different for HIV—it’s just that with HIV, there is a bunch of other social and cultural stigmas associated with the disease, so that having a medical provider not acknowledge a patient as being the expert of their own body and a human being living with a disease (instead of vice versa) will complicate follow up, adherence with medical advice, and communication.

While the medical community may now view HIV just like other chronic diseases, unfortunately the general public has not caught up to this notion.  I fear that as we go forth in treating patients with the new and improved medications, we will overlook the fact that there are human beings dealing with a chronic illness, that, while medically manageable now, it still carries a heavy toll with regards to decisions to disclose, sexual and romantic relationships, and fears of discrimination at work and in other settings.  I think we need to do a better job at maintaining our focus on HIV-positive patients as human beings in spite of all the wonderful medical advances that make it easier to just prescribe medications and think that this makes everything better.  Sometimes it does, and other times it doesn’t.

TFW: Can you provide examples of innovative programs and/or research that you have encountered that seem to be producing positive outcomes?

DJM: Outside of the biomedical studies like the iPrEx PrEP study and the HPTN 052 study that proved treatment as prevention among serodiscordant couples, no.  And definitely not in the areas I’ve outlined above.

TFW: Lastly, can you say a bit about the need for culturally-relevant approaches when working with those populations which are disproportionately impacted by HIV like young black men who have sex with men?

DJM: It’s a new generation and the old models that catered to gay white men won’t fit their sensibilities. Even my generation of black men is out of touch with what our young brothers are going through.  I think that culturally relevant approaches need to begin and end with allowing brothers from this generation who are currently affected to come up with the ideas and develop the priorities that will lead these efforts.  That means some of us will need to abandon our historically self-serving, egocentric ways of maintaining an HIV “career” in favor of facilitating and assisting our younger brothers in becoming the leaders of their generation that they are supposed to be.  There is a lot of work being done with young black gay and same gender loving men and HIV right now, but the majority of them are being spearheaded by folks not representative of the community.  While they hire many of us to take part in these studies, the fact that they don’t come from our communities is problematic in the long run.  Rather than make these initiatives “culturally relevant,” I’d rather suggest that we just make them “ours.” This way cultural competency won’t be the window dressing it usually is, but will rather be something innate and intrinsic to us and our lived experiences.  Keith Boykin’s anthology is a good example of how we can spearhead initiatives that employ major media approaches that connect with larger social, structural and medical issues affecting black gay and same gender loving men. I think we have to think beyond the typical and static approaches of federal and private foundation funding to do the work we need to do.  There’s no reason we can’t make this happen for ourselves.

David Malebranche, MD, MPH, is currently a Primary Care Physician at the University of Pennsylvania’s Student Health Center. Since 2001, David has been providing clinical care to HIV+ patients, and is also an experienced qualitative HIV behavioral prevention researcher, exploring the social and structural factors influencing the sexual health of Black men in the United States.  Dr. Malebranche’s work has been featured in several medical and public health journals, and he is known as a dynamic speaker nationwide on the subject of HIV/AIDS in the Black community.  He can be reached at dmale@upenn.edu or http://works.bepress.com/david_malebranche,