Violence on the Border – The Feminist Wire

Home / Family / Violence on the Border

Violence on the Border

They say that the US-Mexico border is a very dangerous place. Surrounded by cactus, scrub, and hundreds of miles of dry desert, it is a perilous journey for anyone attempting to cross unprepared. Finding yourself out of water in the middle of this place is a death sentence, as there is very little to no water anywhere. Amidst the beauty hides a place of both beginnings and endings, life and death, for thousands of migrants crossing this deadly terrain.

In my work with No More Deaths, I’ve thought quite a bit about some of the women who touched my life without me ever knowing them. I knew them through the stories their families shared, from volunteer reflections, and from assumptions of what they must have thought/felt/experienced. The anniversaries of those we found have come and gone, and I don’t want to forget them. I feel like I have to remember them, to honor them, and to tell their stories in some way. 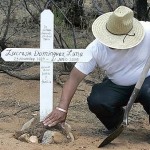 I’m sorry that your husband had left to find work in the US, unable to care for you and your children in Mexico.

I’m sorry that our immigration policies kept you and your children from being able to visit him.

I’m sorry that the only way your children were to see their father was by walking, for days, in the desert.

I’m sorry that the walk was so long and hot; that your feet were sore and blistered; that water was scarce; and that you suffered.

I’m sorry that you were left by the group that led you, alone with your 15-year old son.

I’m sorry that you hugged your 7-year old daughter goodbye for the last time.

I’m sorry that you died in the arms of your son, with no one to comfort him; that he wandered alone for three more days before being deported and returned.

I’m sorry you didn’t get to see your husband.

I’m thankful that I met your father, determined to bring you back home, to your land, to your people.

I’m thankful that he didn’t listen when everyone told him the search was futile…he’ll never find your bones in the hundreds of miles of desert.

I’m thankful for the friends that joined him in the search, mostly to make sure he didn’t get lost and die himself, but most with little faith.

I’m thankful that your son had a good memory and remembered where Babaquivori was, which way the sun set when he left your body, the hills, the trees, the shadows the mountains made as the sun was setting…all to lead them back to you.

I’m thankful that strangers opened up their homes, their kitchens, and their hearts to your father as he ventured out, day after day, on the futile search.

I’m thankful that he found the bodies of three others on his way to you, ending the suffering of more families.

I’m thankful that the arroyos were gentle, that the monsoons didn’t come, that the shadows guided him; that he had faith.

I’m thankful that, 22 days later, he found your hand; and your beautiful rings still glowing in the sun. And your foot, with the Roxie shoes that told us all it was, in fact, you.

I’m thankful that your family found peace and you have been returned to them.

I’m thankful for miracles, in the midst of tragedies. 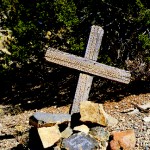 You left to be with your fiancée in America – you called him your soul mate.

You were going to surprise him…he didn’t know how much you missed him and wanted him to hold you again.

You walked over 60 miles in the hot, Arizona desert, the temperature an unexpected 110 degrees.

You began to cramp, with a heavy menstrual flow that increased your dehydration.

Your legs gave out, your energy was gone, you couldn’t walk any further.

You were left to rest in the only place that seemed suitable – soft sand under a mesquite tree to give you shade.

They left you plenty of water.

They prayed over you – having made the horrible choice to leave you there.

They studied the terrain around you, counting the numbered telephone poles not too far away, burning it to their memory so that someone could come back and find you.

They tied a red panuelo to the mesquite limb, a marker for rescuers that never came.

They pulled back your long, black hair so you would be more comfortable.

We got the call that you were left behind.

We thought you were still alive.

We checked the hospitals, clinics, border patrol, but didn’t find you there.

We started to walk…counting the numbered telephone poles back to you.

We found you, as they had left you.

Your long, black hair told us it was you. 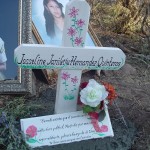 “January is a good month to cross.”

You and your brother have been separated from your mother for many, many years.

Your mother misses you terribly. She cries and suffers to be away from you so for long.

She works hard, 2 jobs or more, to provide for you – but it’s not the same.

You need your mother…every girl needs their mother. To hold them, to comfort them, to caress their hair.

After many years, she has saved all she’s earned. She will send for you and your brother. The distance is unbearable.

The journey is so much harder than you imagined.

You cared for your little brother along the way. He’s only 10 years old.

You made sure he stayed close, kept up, and rested.

But your little body couldn’t keep up with the group. You weigh less than 100 pounds.

Your feet and ankles swell, your legs cramp. You walk slowly, slowly.

The coyote urges you on, to keep up with everyone; you’re slowing them all down.

On January 31st, they leave you.

You beg, scream, to take you with them. Not to leave you alone. To go find help. Something.

There is no convincing them.

Your little brother cries by your side, demands to stay and take care of you, doesn’t want to leave you there alone.

You are stronger and wiser than your age.

Your time here is over.

You soothe him and tell him he’s a big boy. He needs to go. His mother is waiting for him.

Be good and don’t let your mother worry.

Tell them I love them.

“Missing” posters are distributed to various groups by your family. Convinced you’ve been deported or still walking. They want us to keep our eyes out for you.

The desert is beautiful in February. The rains bring green and lushness to a normally dry and desolate place.

It’s a good day for a hike. Four volunteers head out to re-fill food bins and bring fresh water to the trails.

The map shows a shortcut that can take them to the trails more easily. The shortcut is a beautiful hike, with large rocks, deep canyon walls, and hawks flying overhead.

As they come around the canyon wall, they see your shoes, with your socks folded nicely on top of them. You’ve taken them off.

You dipped your sore feet in the water left by the earlier rains and went to sleep. 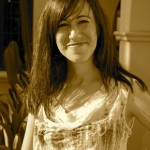 Laura Ilardo is a social worker who lives and works in Phoenix, Arizona. She became involved with No More Deaths early on in its development, about 8 years ago. She has helped coordinate camps in the desert during the summer of 2004 and 2005, and has visited and worked with migrants in Southern Arizona and Northern Mexico. She organized delegations to Southern Mexico, highlighting the journey of Central American migrants traveling across Mexico on trains.

She began the Phoenix chapter of NMD in 2004 and currently coordinates meetings in Phoenix.  NMD-Phoenix has helped to create a network of support in the Phoenix community, educating people on border issues, fighting anti-immigration legislation, and enlisting new volunteers to work in the borderlands every summer.