Maybe to you crime will always be black and white. Maybe because you’ve worked hard and have something to show for that work. Maybe because you’ve never gone hungry or, worse yet, known your brother, sister, child was hungry, and you could not provide. Maybe you’ve never drank or used to escape the gaze of a woman that, whether averted or fixed, reminds you of a failure that is and is not your own. Maybe it never occurred to you that some suspects are suspect before they have committed a crime. Maybe you set bait so you don’t have to acknowledge that the suspects who are suspect are already caught. Caught in a system of surveillance of wide-eyed White men watching without understanding. Sometimes the suspect pulls the car over real easy without saying, Oh shit! Because from previous experience, the suspect often suspects that he will be caught. Sometimes the suspect resists—which maybe for you, makes for better entertainment—so an orgy of officers gripping their cocked guns yells, On the ground! Get on the ground! While one pig, panting hard, mounts the suspect, just to prove everything that they already knew, and everything we always knew they didn’t. 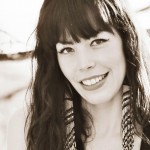 Tria Andrews is Cherokee, Irish, and Filipina and a third year PhD student in Ethnic Studies at the University of California, Berkeley, where she has taught Native American and Asian American Studies. She is also a Ford Foundation Predoctoral Fellow and Fulbright Scholar. Her research examines culturally relevant forms of rehabilitation for Native American youth in juvenile detention centers located on tribal grounds. This work is informed by over five years of tutoring and teaching yoga to incarcerated adolescents.