By Maura Jennison-Obenshain on October 10, 2012 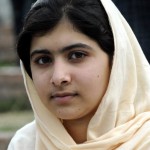 Malala Yousufzai, the 15-year old who was shot by the Taliban in Pakistan on October ninth, has undergone successful surgery to remove the bullet from her head. Malala was targeted for her outspokenness against the Taliban and her activism for education for girls.

The Taliban have claimed responsibility for the shooting. Two men with guns stopped the van she and other girls were traveling in after school, they got in, asked which girl was Malala and then opened fire injuring Malala and two other girls.

The Taliban have told some news outlets that they will try to kill Malala again if she survives.