My Hair: Threat to National Security – The Feminist Wire

My Hair: Threat to National Security 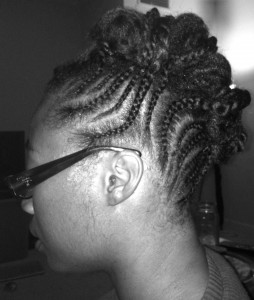 The first time a TSA agent probed my hair I was flying from Atlanta to Washington, D.C. sometime in November 2011. My sister-friend-stylist Shana had hooked me up with a fresh “do” and I was heading back to my regular life in D.C. I stepped through the body scanner, and an agent stopped me and said something like, “I’m going to pat down your hair, ok?”  I sort of looked at her, because I thought I had either misunderstood or I was completely unaware of a new process. The agent—a black woman—poked my hair and sent me off with a “have a good day.” I was dumbfounded.  First, I didn’t understand why my hair needed to be probed, particularly after I had just gone through the “I can see everything on, in, and through you” scanner, and second, I wondered how this sista felt while she was patting my hair down, knowing that we just don’t do that!

My second pat down occurred when my hair was in twists.  To say that I was visibly annoyed is an understatement. “Why do you need to pat down my hair? There is nothing for me to hide in these twists,” I stated. No response.  I became angry. I felt like one of those kids at school who has to be probed for lice because someone in her class has it—the only difference is I was the only person being patted down!  Clearly, there was something threatening about my mane.

My third pat down was in the Austin airport in September 2012. My hair was in a curly twist out. I stepped in and through the crazy body scanner as I have been socialized to do, and when I stepped out, the agent said, “I’m going to pat your hair down now.” I wasn’t asked. I wasn’t given an alternative. I was told this was the next thing that had to happen in order for me to get on the plane. I complied, but I was beyond disturbed. 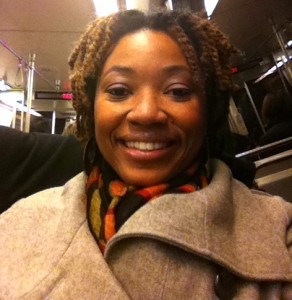 In a nation in which there have been constant negotiations and tensions about who is defining and controlling the black female body, I read this as another example of the ways in which our personal space, our physical bodies (and personal style!) are disregarded and disrespected. Two of the women discussed the ways in which they planned out their hairstyles to fly in order to avoid the pat down. Is it not enough that we are placed under TSA 360 degrees surveillance or that we are physically tampered with every time we attempt to board a plane? Am I to believe that I also need to strategize how I manipulate my hair in order to avoid being encroached on (which, by the way, in my experience, has not mattered…I’ve had three different styles, and three separate pat downs)?

I write this because I am disturbed.  What type of push back is appropriate and/or necessary to avoid this sort of discrimination in the future?  U.S. airport security measures seemingly disproportionately devalue black women’s bodies, and our crowns of glory.  Something should and must be done about this.  For those reading this and thinking, “well it’s just hair,” “they’re not harming me,” “we have no alternative,” or “I’d rather this than get blown up a plane,” I just want you to consider this: it is never just about hair and it is never just about security.  Racial, ethnic, sexual, etc., profiling happens for a reason.  It is not innocuous. If it was, the people who responded to my facebook status would not have been overwhelmingly black women. And, if it was “just hair, ” I wouldn’t be disturbed.

Ashanté Reese is a fourth year doctoral student in anthropology at American University in Washington, D.C. Her dissertation research explores the intersections of race, food consumption, and health by  examining the diversity in African Americans’  diets and their subjective notions of what it means to be healthy.

Related ItemsRaceracismStyleUS
← Previous Story Sisters of the “Yogic” Yam: bell hooks and the Yoga in Self-Recovery
Next Story → A Feminist Review of Hotel Transylvania